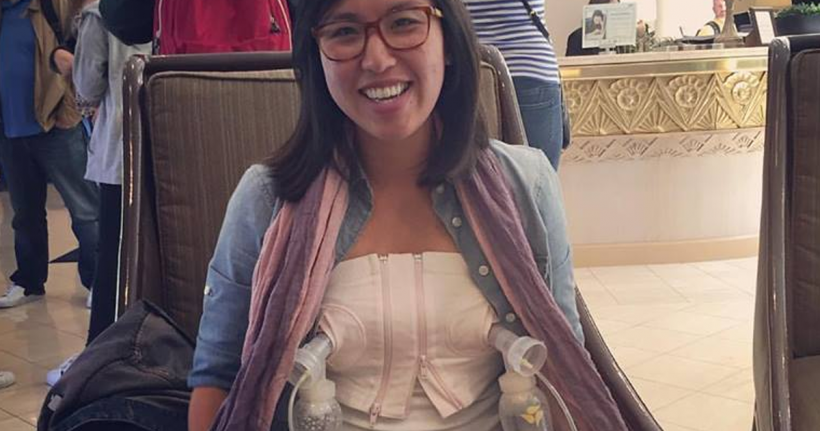 Lynda Mazzalai Nguyen was attending a seminar at the Embassy Suites in San Francisco, California.

Before the program began, the breastfeeding mum stopped by the hotel’s front desk to ask if there was a private place where she could pump. Two different staff members told her to use the bathroom.

“I told them they don’t eat lunch in the bathroom, so it’s gross to expect me to contaminate baby’s milk in there.”

What followed was a litany of excuses. These are just some of the ones Mazzalai Nguyen heard:

“1) “No, you can’t use the hotel rooms since you haven’t paid for it.” Uhh I paid a fee to attend the seminar which paid YOU, so YES, I am a paying customer.

2) “There are no hotel rooms available. We sold out this morning.” LIES. I found rooms on Expedia!

3) “I don’t feel comfortable putting you in an uncleaned room.” So a dirty bathroom with urine and feces is better than a room someone just checked out of?

Mazzalai Nguyen refused to budge. She was not going to pump in the bathroom, no matter what.

Eventually the hotel offered the wine cellar, but by that point she’d had enough.

So, she put on her hands-free pumping bra and pumped in the lobby — right next to the reception desk.

“Fuck you, [Embassy Suites]. I’m livid,” Mazzalai Nguyen writes in her post that was shared on Breastfeeding Mama Talk’s Facebook page along with a photo of her pumping in the lobby.

“Do NOT piss off a mama who knows her rights and is a social worker to boot!”

With 19,000 likes and 1,400 shares in 17 hours, Mazzalai Nguyen’s post is definitely striking a chord with mothers. And if the comments are to be believed, her post might just bring about real change.

This Breastfeeding Mom Was Told To Pump In A Hotel Bathroom. She Had Other Ideas.
Sara Nachlis