I Wish My Friends Would Have Asked If I Was Gay 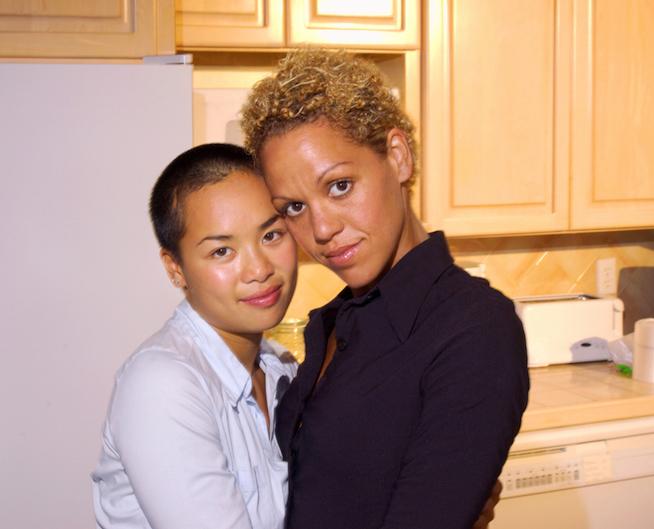 The worst part was that I didn’t feel like I could talk to anyone about it.

I wish we lived in a place where it was totally normal to check in with your friends, and to ask, “Are you dating anyone?” rather than, “Do you have a boyfriend?”

When I told my friends I was gay, the majority of them said, "I knew it! I kept wondering why you wouldn't tell me." But they never made me feel like I actually could.

I spent much of my sophomore year of college laying in bed with a girl I barely knew and binge-watching The L Word. We went on several dates before I realized they were dates, and that maybe I wanted them to be.

We switched back and forth between our apartments, spending some nights at hers, others in mine, until we pretty much never slept separately. I decided that I liked her, realized she liked me, and tried to figure out what the hell that meant.

That was a rough year for me. I’d been obsessed with boys for almost my entire life, and the concept of myself as someone who liked girls seemed baffling. I’d always been open-minded and a huge ally, but hadn’t ever considered what I’d do if a girl gave me the opportunity for a romantic (or sexual or both) relationship.

Would I ever feel ready to deal with everything that went along with being explicitly queer?

And the worst part was that I didn’t feel like I could talk to anyone about it. I was terrified that it was just a phase, or that I didn’t actually like-like this girl.

I’d never even kissed a girl — what if I hated it? What if I decided I was gay and then went back to exclusively dating boys? The concept of sexual fluidity made sense to me in theory, but were totally new to me in practice.

And for whatever reason, although other people were totally legit for being bisexual, pansexual, or queer, this seemed impossible for me. How could I be these any of things? Would I ever feel ready to deal with everything that went along with being explicitly queer?

At the time, I could only see the negatives. And I was terrified.

One morning at the end of the school year, the girl I was seeing and I left my bedroom to find my roommates sitting in the living room. She gave my roommates a nod and said she’d see me later. My roommates just waved before returning to their conversation.

I realized then that we would probably never talk about what I’d been doing with this girl, who I was semi-living with. Either it was completely beyond their capacity to think that I’d have feelings for this girl, or they were just totally disgusted by the idea.

I didn’t want to deal with either — and to be honest, I didn’t have the energy to.

Six months later, the girl and I no longer had anything to do with each other. But something else — something more important — changed, on that deep-down level of identity: I made peace with my sexuality.

And I was done hiding it.

I wish my friends had said something. I don’t know what, exactly — “Are you OK?” maybe, or even, “Are you gay?”

When I finally came out to my roommates, they seemed relieved. They said they’d been worried about me the previous year and wondered when I was going to tell them. They said they’d figured I was gay, but had wanted to give me the space to figure it out.

I didn’t know how to say it then, but looking back, the absolute last thing I’d needed during those rough few months was space.

My friends were loving and had good intentions. They wanted to make sure not to infringe on my right to privacy, and they could tell I was feeling especially sensitive and vulnerable. I’m certain they were afraid of making it worse.

But they could also tell that I was basically depressed — I slept all the time, hardly talked to them, and wasn’t doing anything at all, beyond hanging out with this girl who I hadn’t even known existed a few months earlier. If nothing else, something bizarre was happening, and it wasn’t good.

I wish my friends had said something. I don’t know what, exactly — “Are you OK?” maybe, or even, “Are you gay?”

I wouldn’t have expected perfection, or for them to even have the language to ask “Are you bisexual?” or “Are you struggling with your sexuality?” But maybe, if they’d straight-up asked me if I was depressed or struggling with something, I would have felt the support that I desperately needed at the time.

Toward the end of my sophomore year, one of my roommates left my favorite candy bar by my bedroom door with a note letting me know that she cared about me. For me, this move meant the world. Little things like that are revolutionary when you feel like you don’t even know who you are anymore.

But I wish they’d gone one step further. I wish we lived in a society that encouraged that level of openness between friends. I wish we lived in a place where it was totally normal to check in with your friends, and to ask “Are you dating anyone?” rather than “Do you have a boyfriend?” Likewise, I wish we could ask each other things like, “Do you still like she/her as gender pronouns?” rather than making assumptions for the rest of our lives.

I wish it weren't weird to get these sort of updates from friends, and to ask them about things like depression, mental health, and sexuality.

Some people seem to think that the answer to inequality is to shut down all difference. But I have to wonder if the answer is to highlight it instead, to ask, “Who are you today?” instead of assuming we’re always the same person we were yesterday.

If you like this article, please share it! Your clicks keep us alive!
Tags
coming out
LGBTQ
queer
sexual fluidity