From Straight To Queer: My Path Of Discovery 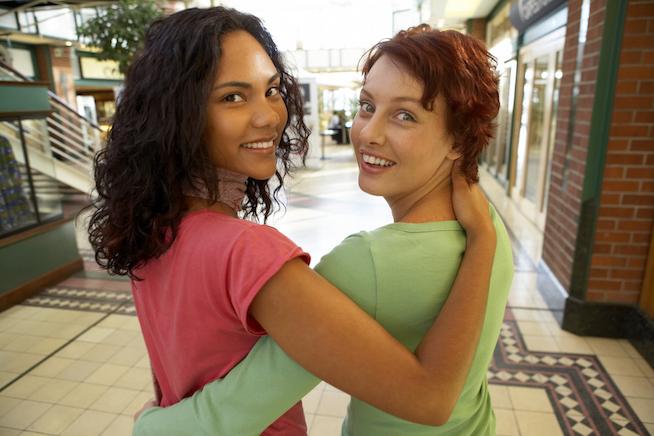 When I began having romantic feelings for girls, I was surprised, scared, and hesitant, but I wasn’t willing to totally shut it down.

The political nature of [“queerness”] gives me flexibility I never felt I had when I was straight.

Growing up, I was very, very straight.

I had no interest in anyone at all until I hit puberty, and then I immediately had crushes on boys — dozens of boys.

I liked the tall ones, the short ones, the funny ones, the shy ones. I created a future for myself with a brunette who read the newspaper while I got ready for work, a skater boy with a guitar who wrote me songs, a basketball player who hugged me with each win. I liked boys of all types, and I liked them very, very much.

None of that was fake or forced, though I still wonder what role compulsory heterosexuality played in my identity.

Despite all of that, I believe my heterosexuality was real.

However, it made it difficult for me to understand my own queerness.

It was tempting for me to look back and see those moments that everyone but me seems to have when they should have “known” they were queer. A crush on another girl in the second grade classroom, a gender binary-challenging favorite toy (or outfit), a habit or hobby that somehow signaled “gay.”

But to act like I have these would be to be inauthentic about my own history. I was — for a long time — straight.

And then I wasn’t.

The thing is that I was always open to new ideas, perspectives and people. I’m strong-willed in my beliefs, but I’m never closed off. I’m willing to engage and question, which often means questioning myself. My sense of self is always a little blurry, as I recognize that I’m not static. I may not be tomorrow who I am today, but as long as that person still lives by a certain code of ethics, I’m cool with that.

So when I began having romantic feelings for girls, I was surprised, scared, and hesitant, but I wasn’t willing to totally shut it down.

I had small crushes here and there beginning in college. I told myself that these were just the Cool Girls, those girls who fit the cliché of everyone wanting to both date and to be them. I told myself it had nothing to do with me, but rather spoke to the magnetism of these girls, their charisma, their ability to make you feel like you were the only one who mattered.

And it made sense. These girls were always funny, popular, and witty in a way I never was and never will be. They had a confidence in their own likability that made me want them to like me. It just took me some time to realize in just what way I wanted them to like me.

It didn’t matter, though, because these girls were always, very, very straight.

Until, finally, one wasn’t.

The entire concept of queerness allows me a fluidity that makes me feel whole, both in relationships and beyond them.

It was the first time I’d ever been pursued by a girl. I thought she was straight (here’s to assuming heterosexuality!) until she told me she dated girls, and my entire world shifted on its axis.

But could I? Would I?

And then I did. And then I continued to date girls. And then I told my friends about these girls. And then I kept dating girls, decided I was bi or maybe queer (a space I still occupy and feel comfortable in, despite its lack of definitiveness), and realized that this was the life I wanted to live.

My coming out was and is still is a slow process.

My closest friend said that she’d figured that the “girl crushes” I was having on other girls weren’t that heteronormative thing, but real, live crushes. My childhood best friend was surprised because we’d spent a decade fawning over boys together, but was completely supportive and immediately wanted all of the details.

My friends were grateful that I’d opened up to them, and showered me in love.

The only people I sat down were my immediate family members. I told my sister in the car. We pulled into my driveway, and I told her I was dating girls. She let her own list of secrets roll free. It bonded us in a way that nothing else ever had; we’ve been at our closest ever since.

My mom was shocked. I think she did that thing that mothers sometimes do where they see the future they’d built crumble. It took her a moment to realize that I was the same girl standing before her in the kitchen as I’d been just seconds before the words “I’m dating a girl” left my mouth.

Otherwise, my coming out was casual.

I mentioned I’d broken up with a girl to my dad via text and he simply asked if I was OK. My younger brother met one of my girlfriends on Skype, and when I said we were dating, he just sort of giggled and shrugged and moved on with his life.

Today, my family adores my partner maybe even more than they adore me. (Just kidding, but she is way funnier and a hell of a lot more easygoing.) They don’t question the validity of our relationship.

Some of my friends have since come out, and all of us, queer and straight and everything beyond and in between, have discussed gender roles, sexuality, identity and just how fluid they all are. I’m lucky to have a community, however small, where we operate by the same rules and ethics and values.

At the end of the day, I would say I’m Quite Queer.

The political nature of the term gives me flexibility I never felt I had when I was straight. I don’t do gender roles or labels beyond it. The entire concept of queerness allows me a fluidity that makes me feel whole, both in relationships and beyond them.

I feel most like myself when I am at my most queer.

If you like this article, please share it! Your clicks keep us alive!
Tags
queer
coming out
LGBTQIA
bisexual
compulsory heterosexuality
heteronormativity