I'm Middle-Aged, A Woman, And Invisible 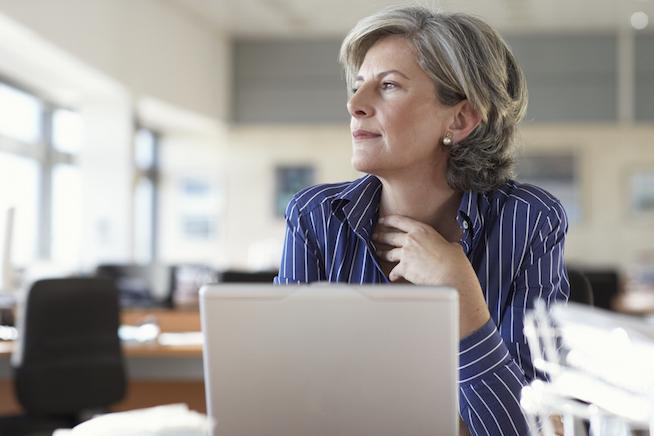 At first — I’m slightly embarrassed to admit — I mourned this loss.

I didn’t realize how much I valued my sexual attractiveness until it was “gone.”

I’ve been mentoring a young woman in my industry (marketing and content writing). I’ve encouraged her to attend local networking events as a way to build connections and help her build her client base. I’ve been doing the same for years, and building those connections has helped quite a bit in establishing my business.

But my experience at these events, it turns out, are quite a bit different than hers. She’s young and beautiful, and when she gave a prospective client her business card, he texted her an hour later saying, “Let’s fuck!”

Firmly middle-aged due to my 47 years, I’m fat and everything about me pretty much screams “Mom.” This means I no longer get sexually harassed. The closest I’ve gotten to being hit on in the last 10 or so years was that time a homeless man tried to touch my hair after I left the salon.

When it comes to the male gaze, I am now officially invisible.

No one has ever texted me after receiving my business card suggesting we fuck.

I began noticing my invisibility about the time I started trying to have a baby. I was 33, happily married (still am!), and didn’t really notice the decline in male attention. By the time I finally had my daughter at 38, I wasn’t really paying attention. Besides, I didn’t give a shit — I was thrilled to finally have this tiny baby in my life, and disappeared into the lovely fog of early motherhood.

I resurfaced from that fog around the time my daughter went from toddler to kid, and suddenly I was in my early 40s. This was when I really became aware that I no longer caught the gaze of men at all. At first it was easy to write off as a side effect of weight gain, but when I was 25 and fat, men still looked at my breasts, chatted me up, and asked for my number.

At first — I’m slightly embarrassed to admit — I mourned this loss. Even though I was raised as a strong feminist and worked hard to know my worth without needing to be weighed and measured by men, I still missed the attention. I didn’t realize how much I valued my sexual attractiveness until it was “gone.”

However, it was during this same period that I quit my full time job and began working for myself. My daughter was a year old when I left my job with a local college in 2007 and began writing full time. It was an incredibly rocky path to take (thanks economic downturn!), and I made a huge number of mistakes while I was learning, but it turns out my invisibility as a woman worked in my favor.

It took me a while. I should have sought out a mentor myself, frankly, as I had almost no idea what I was doing. But once I buckled down and got serious about being a business owner, my invisibility as a woman helped because I was judged solely on my work. No one ever took my business card, pretending to be interested in hiring me, only to sexually harass me later.

This must be what it’s like to be a man.

Today, in meetings with prospective clients, I’m treated as a professional with respect. Everyone listens to what I have to say, no one interrupts me, and at least 50% of the time I get the job. After a lifetime of being discounted, looked over, and devalued based on my gender, this invisibility feels pretty darn good. I like who I am today and where my life is, and I can now clearly see how little all that male attention actually did for me.

I wish I had good advice for the young woman I’m mentoring, other than changing the phone number on her business card to one that doesn’t accept texts. All I can tell her is that she needs to expect to work twice as hard as the men in our field to be heard — and frankly, that’s just the way it is until she too hits the age of invisibility.

Of course, then I’ll have to warn her about having to worry about age discrimination, particularly as a woman — but that’s another article entirely, isn’t it?