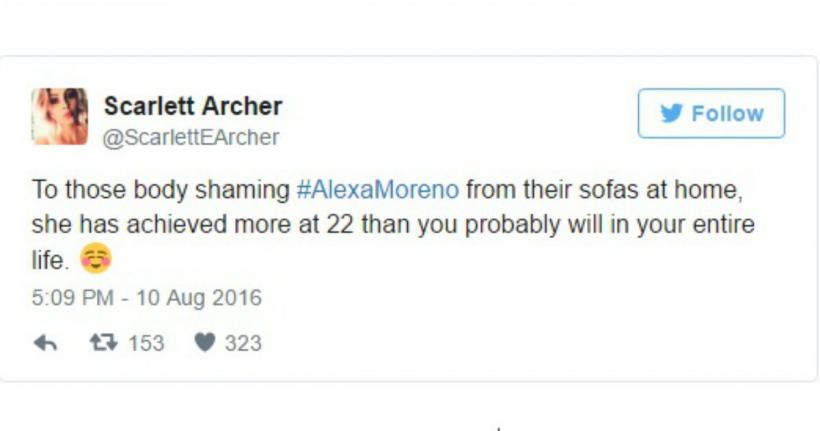 Thankfully, common sense has now prevailed in the Twitterverse and many other suitably-impressed mere mortals have now come to her defense. Image: screengrab.

Despite weighing a sprightly 45kg [99lbs], being capable of aerial splits and competing in the OLYMPICS, a Mexican gymnast has been compared to a “pig” for absolutely no reason.

After competing for her country in the artistic gymnastics in Rio on Sunday [August 7], 22-year-old Alexa Moreno was taunted online by cruel trolls.

One Twitter user captioned an image of Peppa Pig with the words: “Exclusive images of Alexa Moreno following her gymnastics routine.”

Meanwhile, some other a**hole tweeted, “Alexa Moreno has the body of two gymnasts together, a diet before going to the Olympics would have been nice.”

Alexa Moreno, a Mexican gymnast, was body shamed during the #Olympics. The internet fired back. https://t.co/5c6RfHECwX

It’s worth noting that, aside from having a teenie tiny BMI, Mexico is rarely represented in gymnastics at an Olympic-level. [Editor’s note: And, of course, it must be noted that BMI is neither an indicator of health nor fitness.]

By all accounts Morena killed it, too — expertly landing herself into 12th place.

Thankfully, common sense has now prevailed in the Twitterverse and many other suitably-impressed mere mortals have now come to her defense.

You are talented, beautiful and I wish I had those strong legs!! You have a great future ahead #AlexaMoreno pic.twitter.com/2rcPFOxHcS

To those body shaming #AlexaMoreno from their sofas at home, she has achieved more at 22 than you probably will in your entire life. ☺️

#AlexaMoreno You go girl, proud of you. You're talented and beautiful! pic.twitter.com/0QptVph3dk