An Open Letter To My Upstairs F#cking Neighbor 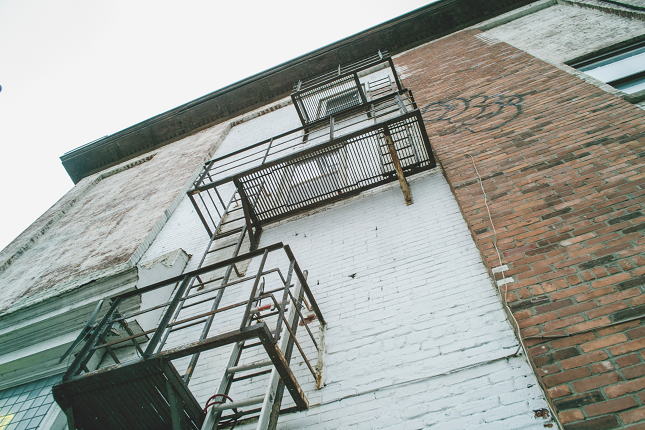 You were so tickled by your own laughter that you spent 15 minutes having a competition of some kind where you tried to do the best imitation of each others’ laughs. It was cute. It was also really fucking annoying.

After all, I chose to live here knowing full well that this is a college town. An “every-day-is-a-good-day-to-get-drunk” town. The kind where, on any given night, a herd of fraternity brothers can be seen pushing each other around and howling at the moon (or, you know, throwing up on your neighbor's lawn).

“Let’s live downtown,” I said to my partner, craving the city experience after a life in the suburbs. “I’ve already found the perfect place.”

“Won’t it be noisy, being so close to campus?” they replied, ever the pragmatist in our relationship.

Before you misunderstand me, let me say this: I’m no grandpa. Maybe at heart, but in reality, as I’m sure you already know, I’m the queer boy downstairs who dances to Passion Pit and marathons Gossip Girl.

I understand the appeal of a cold brew or a loud, steamy, unbridled sexual encounter. I am not here to deprive you of your brews nor your orgasms. In fact, I encourage you to enjoy them both as often as you’d like.

You know, during reasonable waking hours. Like normal adults who sleep eight or so hours and don’t sleep past noon (don’t deny it, I never hear a peep until the afternoon. I know when you are sleeping and I know when you’re awake…I’m basically Santa Claus).

But, just an example here, the other day I was about to hop in the shower late at night when I heard you and your friends loudly and drunkenly discussing your vaginas.

Again, I’m not a prude, but I am concerned.

You explained that you had finally explored your own body (which is GREAT, I’m happy for you) and were shocked to find that your vagina was not smooth but rather, had fleshy ridges and a weird texture you weren’t expecting.

What concerns me is both the volume of this conversation (you do realize your voices carry through the vent, right?) AND the fact that you had only recently explored this part of your body. My friend suggested we send you a copy of Our Bodies, Our Selves. Not a bad idea. But I digress.

You actually seem to have a lot of loud conversations at bizarre hours. Like recently, you had a small gathering on a Thursday night which included music, stomping (or dancing? I wasn’t there, I can’t tell), and laughter that persisted well past quiet hours and my bed time. I’m talking like, two o’clock in the morning.

And after laughing, you were so tickled by your own laughter that you spent 15 minutes having a competition of some kind where you tried to do the best imitation of each others’ laughs. It was cute. It was also really fucking annoying.

As I am no longer in college, I do not have the benefit of scheduling my classes — or in this case, my job — so that they start in the afternoon. I actually begin my day at 7 a.m. So I’m sure you can imagine my frustration when you are doing what I can only describe as rehearsing Riverdance in cement shoes.

I was a college student once. It was a time when I learned a lot about myself and about the world, too. During my studies, it felt like watching paint dry and it seemed like it would never end. But in reality, it was gone in the blink of an eye.

So trust me when I say that I want you to savor this time. I want you to, as my hero Ms. Frizzle would say, take chances, make mistakes, and get messy (Magic School Bus? Or was that just past your time? God, I feel old — it’s on Netflix, look it up).

Exploring your vagina is a great start. If I can make a recommendation, as someone with similar equipment, the clitoris is arguably even more exciting, especially if you have a Hitachi Magic Wand (swing by downstairs if you need more sex toy advice or feminist erotica recommendations; I got you, boo).

But —  and this is a huuuuge but —  I’d prefer it if you could take those chances maybe outside of the apartment, make your mistakes a little more quietly, and get messy during reasonable hours (unless it’s the weekend; I’m not a total asshole).

You know, so I can sleep without the sounds of you dropping bowling balls (you seem to drop a lot of things, are you OK?).

Because the one thing I can confirm about post-grad life is that it’s hard fucking work, and you won’t get by on downing two Red Bulls in the morning, inhaling some ramen, skimming SparkNotes, and showing up 20 minutes late with your gum stuck to your hair (I’ve been there, it’s rough).

And before you accuse me of being jealous of your freedom and your carefree attitude, let me nip that right in the bud and remind you that when you’re an adult, you don’t have to buy the cheap vodka —  you can get the real shit. You can also rent a car. Bite me.

One more bit of unsolicited advice, since I can’t help but notice this: Ditch that fuckboy who keeps arguing with you about stupid shit when you walk in the door. From the sounds of it, he’s selfish in bed, too. We both know you don’t need that kind of negativity in your life.

If you like this article, please share it! Your clicks keep us alive!
Tags
humor
neighbors
feminism