So Your Friends Are Getting Engaged, And You're Having An Existential Crisis 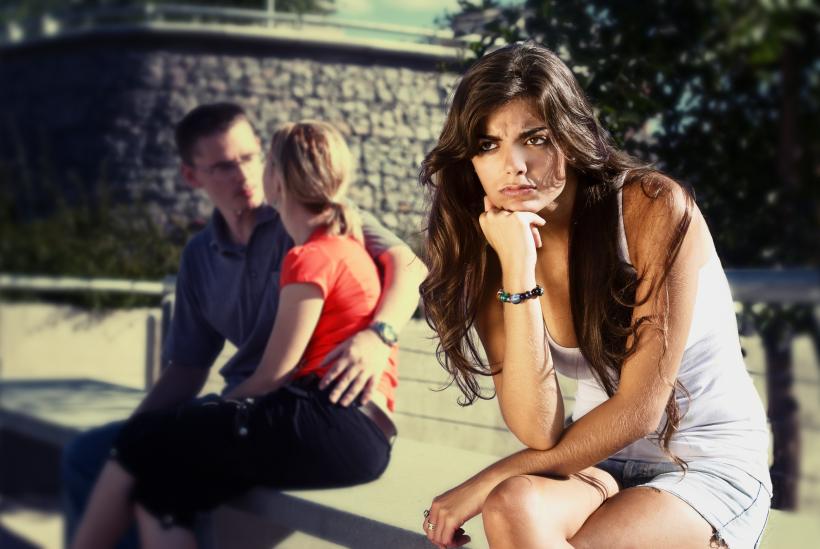 "Why do we feel that strange mixture of conflicted emotions every time we see someone we sort of know get engaged?" Image: Thinkstock

Like most other hip young twenty-somethings, I dedicate an uncomfortable amount of time to the photos and life events of people I kind of know. The funny thing is, I really wouldn’t care to see most of these people in real life if I had the opportunity, but observing them from afar satiates my curiosity. I’m like Jane Goodall with an Instagram.

Side note: after writing that last sentence, I did a little investigative journalism and found Jane Goodall’s Instagram, and it’s everything I’d ever dreamed of — just selfies with chimpanzees and nature photography.

Between all of the political arguments and videos of dogs being excited to see their owners, I’m noticing a trend appearing all over my timeline — seemingly increasing every week.

A lot of fucking people are getting engaged.

Now, this is hardly news. More interesting though is the proliferation of memes and Facebook statuses about how it feels to not be engaged. For every photo of a kissing couple and a diamond ring, there’s three people sharing a funny picture emphasizing how alone they are.

Even though self-deprecating humor is always hilarious and never gets old (it’s impossible to convey sarcasm in writing), it brings to light an important question. Why do we feel that strange mixture of conflicted emotions every time we see someone we sort of know get engaged?

However, that’s clearly too simple to be the actual reason. I know people with no interest in romantic relationships who have openly told me about this sensation. Hell, I experience this feeling on occasion and I don’t even personally believe in marriage, so I can promise you it isn’t about envy.

The feeling is more selfish than annoyance, but less romantic than jealousy.

It’s the vague sensation of disappointment in oneself.

To be curt, we fucking love romance. We eat that shit up. Romance makes up a lot of our art, subplots in our literature, a vast majority of our music, and around 90% of Matthew McConaughey’s career before 2011.

Not only are romantic relationships glorified in our culture, they’re seen as a staple of a life well lived. While this idea is slowly getting phased out by modernity, marriage has long been treated as one of the major tent poles of adulthood.

I believe that subconsciously, we look at people we know are married as though they at least have their shit a little more together than single people. After all, they found their special person and got out of the shitshow that is the dating scene. They’re unwavering in the face of life’s third-largest commitment, right behind tattoos and unironically wearing a pair of cowboy boots.

That unsettling feeling that you can’t quite place, that twinge of anxiety that bubbles up when you see someone else on Facebook getting married — it isn’t really jealousy, it’s the tiniest hint of a worry that something’s wrong with you.

It’s the same feeling you get when you realize you might be the one picked last in gym class. It’s the sneaking suspicion that you’re not good enough, without knowing exactly why.

The constant reminder of our own mortality and the threat of wasted time has us living life as though we’re working against a clock. While that’s a great motivator when it comes to working hard or following your dreams, love doesn’t work that way.

I completely understand the feeling. In a world that treats romantic relationships as something indicative of your value, and expresses concern if you don’t make certain benchmark life choices at certain times, it’s intimidating to feel like you aren’t keeping up with those around you.

Therein lies the answer, though. The only way to win the race is to realize that there is no race.

Neither the opinions of individual people nor the general societal consensus have the right to dictate what constitutes a “life well lived.” It might seem like everyone you know is getting married in their twenties — and that may very well be the case — but not too long ago, people got married at 13 because by the time they hit the age of 25 they might already be dead from shingles.

We’ve been conditioned to compare our lives to the lives of those around us. Not only do we measure our successes against theirs, but we care about when they happen almost as much as we care about what they are. Buying your first home is wonderful, but that douchebag Steven from your philosophy class in college bought his house two years ago, and there’s no way Steven is better than you, is he?

The constant reminder of our own mortality and the threat of wasted time has us living life as though we’re working against a clock. While that’s a great motivator when it comes to working hard or following your dreams, love doesn’t work that way.

Love is patient, love is unpredictable, love waits for the right moment and slowly comes into your life like an autumn leaf gently setting on the surface of a pond. Love doesn’t care about timing or best laid plans. It just is what it is, when it is.

Just because your achievements happen at different times than someone else’s doesn’t make them any less important or real. Our triumphs have value because of what we went through to get there, not because we managed to do them within an imaginary schedule society has placed upon us.

So, when Carrie from your ex-boyfriend’s old job is suddenly engaged to some dude she met on Tinder nine months ago, there’s no need to feel concerned that you’re not going to meet some sort of general consensus on when people get engaged.

Whether you get married before those around you, after them, or not at all, there’s one thing you need to remember.

Only you are allowed to dictate what your life should be.