What 'Depression' Actually Means (Because Some Of You Don't Know) 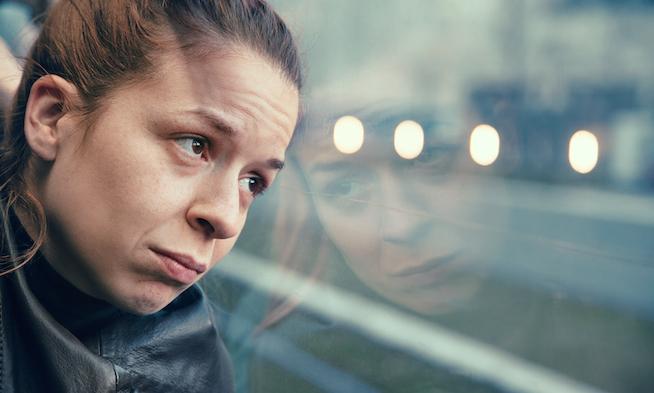 Believe me when I say that I know depression.

I ask you, if a few strands of my hair fell out in the shower, and I complained to a person with cancer that it was like going through chemo, wouldn’t you cringe?

“Ugh, I had a really bad day at work and I’m just so depressed!”

“I don’t know — I’ve just been feeling really down lately, ‘cause things keep not coming through for me. It’s just so depressing.”

“I want to get back out there and date again, but after things ended with [redacted], I’ve just been in this depressed funk, you know?”

These aren’t exact quotes, but things like this (and many others) have been said to me before, and I wanted to take a minute and address something called “precision of language.”

This is not a phrase I invented. It comes from The Giver, Lois Lowry’s amazing dystopian novel. In the YA novel, the community values Sameness so highly that understanding exactly what is being conveyed through speech becomes vital. Thus, “precision of speech”: using the exact word or phrase to convey an intended meaning.

Obviously (spoiler alert!), Sameness is something that the main character, Jonas, ends up fighting against as the story progresses, but the idea of being precise when you communicate with others stuck with me as inherently positive.

This is why I have such a problem with using the words “depressed,” “depressing,” or “depression” colloquially.

These words have meanings and, for those of us diagnosed with capital-D depression, those meanings are important.

So let’s take a minute and be clear...

While Merriam-Webster’s first definition of depression is “a state of feeling sad,” the Mayo Clinic lists the symptoms of depression as:

There are others, but I think that’s a good place to start.

Since I have bipolar disorder, I’ve experienced all of these symptoms and many others. I’ve been so exhausted that taking a nap turns into sleeping for 18 hours. I’ve felt my identity slip quietly away and be replaced by nothingness. My skin will feel like lead (which makes getting out of bed next to impossible), but inside I feel completely empty. I’ve cut myself to feel something, anything at all, and despite the shameful aftermath of harming myself, I’ve wanted to do it again.

In those times, I’ve heard a small but insistent voice whisper repeatedly, Kill yourself — this will never end unless you end your life.

I’ve been hospitalized in an emergency psychiatric ward because of that voice. I heard it on the subway on my way to work and nearly downed my entire bottle of mood stabilizers with a water bottle I found on the floor of the car. I was kept in the hospital for 72 hours, because Massachusetts state law dictates if you appear to be a credible threat to yourself or others, that’s your minimum stay.

I advocated hard to get out of the hospital as soon as possible, knowing my home environment would be good for me; but being here, with the sun on my face and my cat curled up behind me, doesn’t alleviate the feelings of misery without a cause.

So believe me when I say that I know depression.

The fact is that most people who know me also know that I live with depression. Lord knows I write about it, tweet about it, and advocate for destigmatizing it. They know about my trials and tribulations with therapy and medication. Most know about my struggles with self-harm and suicidal ideation. Many know that I was in the hospital, and why I was there.

Why is it OK to minimize the symptoms of a serious, debilitating, chronic condition with no cure just because it’s mental, not physical?

This is why it bothers me so deeply when they claim to be depressed, knowing full well that their experiences have nothing to do with my own.

It’s bad enough that we who live with mental illness are forced to deal with stigma every day of our lives. We’re told that we’re crazy. We make people uncomfortable.

However, we feel uncomfortable when tragedies like mass murder are blamed on mental illness, as if we had anything to do with it. We’re given a wide berth when we begin to describe our diagnoses — chronic conditions that, if they were physical instead of mental, would elicit sympathy and caretaking rather than aversion.

These reactions are real. They’re all too common. And they hurt in ways I cannot begin to describe.

But so does downplaying a medical diagnosis to the level of normal, though difficult, experiences.

You can say that I’m being oversensitive. You can say that this isn’t a real concern, that babies are starving in Africa, yadda yadda (and this is true, but let’s stick to the point)...

I ask you, if a few strands of my hair fell out in the shower, and I complained to a person with cancer that it was like going through chemo, wouldn’t you cringe?

If I had a habit of walking into things and bruising myself (...wait, I do have that habit), and told someone with HIV that I looked like an AIDS patient, wouldn’t you say that was inappropriate?

If I had terrible stomach pain or indigestion, and said I might as well have Crohn’s Disease — to a person with Crohn’s — that would cross a line.

So why is it any different with depression?

Why is it OK to minimize the symptoms of a serious, debilitating, chronic condition with no cure just because it’s mental, not physical?

All it does is minimize mine.