In what was arguably the most disturbing moment of the incredibly disturbing 2016 presidential race, America was treated to audio of Donald Trump bragging to NBC’s Billy Bush that he, as a celebrity, could grab women by the vagina.

“I don’t even wait. And when you’re a star, they let you do it. You can do anything.”

"Grab them by the pussy. You can do anything,” the then-reality TV jerk face guy said to Bush.

In the immediate aftermath of that tape, 13 women came forward and agreed that yes, yes, Mr. Trump DOES grab women by the pussy. And the ass. And sometimes, he kissed them without asking. Or pinned them to a wall and tried to convince them to have sex with him while his pregnant wife was in another room.

Tragically, the grabby-handed reality show jerk face was elected president by the electoral college. (Not by the popular vote, though. He lost that. By three million votes.) As his transition to the presidency has progressed, a whole new slew of issues has taken the world’s attention. The questions about the groping allegations have faded to the background as we learned that Trump may have unsavory ties to Russia, that he has no intention of separating himself from his businesses and/or their profits, even those coming from foreign governments, that he still can't control his impulses on Twitter, and that no one likes him enough to come out and say “I’ve known Trump for years and he’s too nice a guy to hire hookers to pee on Obama’s bed. Unthinkable!”

Honestly, isn’t that weird? No one will testify to his character. No one outside his family stepped up when women accused him of assault, either. It’s like he doesn’t have friends, just flunkies who only like him for their paycheck.

Anyway, the groping allegations haven’t gone anywhere. Except to court. Famed attorney Gloria Allred announced today that she’s filing a defamation suit in civil court on behalf of The Apprentice contestant, Summer Zervos. Ms. Zervos had previously spoken out about these allegations, which Trump denied, calling her allegations “fiction." In the suit, Zervos alleges that Trump subjected her to unwanted sexual touching and harassment on the set of the reality show, and that when she spoke up about his actions, he made defamatory statements that caused her personal and reputational harm.

Allred says that Ms. Zervos would be willing to drop the suit if Trump would just admit that the allegations are true and he really is a Stubby-Finger McGropeyhands. If he won’t do that, he will be deposed on the matter and have to appear in court.

Brilliant. He either admits to being a serial groper and harasser OR he goes to court and risks committing perjury. Remember perjury? Bill Clinton was impeached for that.

Presumably, there will be statements from the Trump team in response to all of this. All that remains to be seen is whether his lawyers get to his phone before he starts tweeting about it.

If you like this article, please share it! Your clicks keep us alive!
Tags
Summer Zervos
donald trump
The Apprentice
sexual harassment allegations 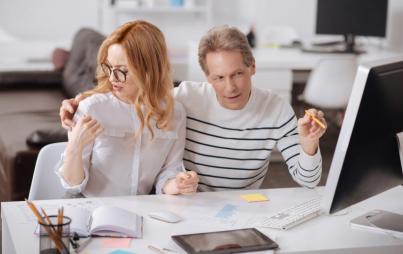