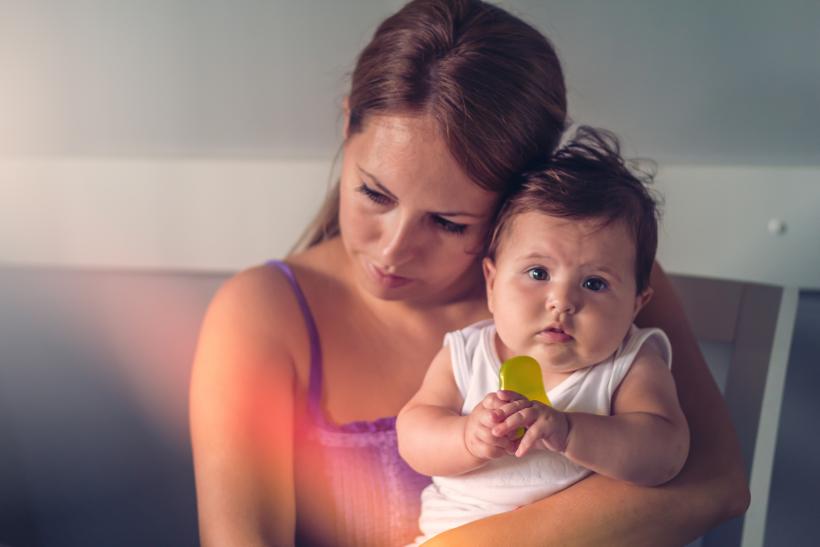 Sometimes, it's just too hard to imagine going through it all again.

I’ve been pregnant three times, and I have two beautiful, amazing, awe-inspiring boys. My first pregnancy did not make it, ending in a preterm birth at 21 weeks. Because of my loss, my second pregnancy was highly medicalized — I had every intervention known to man, and things STILL went south. Because of THAT, my third pregnancy was wrought with anxiety and fear.

Now, pushing 40, my window of fertility closing, I would LOVE another baby, but I’m terrified of being pregnant again. I can’t do it again. Nope. Nope. Nope.

After so many complications and traumatic experiences involving pregnancy and birth, everything from my loss to a C-Section gone awry (awry is a nice way of saying I FELT MY C-SECTION), I just can’t make myself go through it again. You could promise me that it would be a routine pregnancy and delivery, no complications, no problems, and I still wouldn’t.

After my loss, my OB and I decided to take no chances, and I opted to have a vaginal cerclage placed when I was 16 weeks pregnant. The placement was an outpatient procedure, and I was assured it would be a piece of cake. I arrived at the hospital, checked in, and after a bit was taken back to the OR for epidural placement. That’s when things started getting hinky.

After my epidural had been placed, my legs were suspended, displaying all my parts — ALL OF THEM —  to the OR ...which was filled with people. Not just a few. Not just a handful. There were probably 15 people milling about with others passing in and out, willy-nilly. At least half of them were men. I was shaved (by a man) and prepped (by a man), then left, legs hoisted into the air, exposed to the world, for 35 minutes while we waited for the maternal-fetal medicine doctor to arrive.

When the time finally came to give birth, all did not go as expected, and I ended up in the OR for an unscheduled C-Section. My epidural, which I had placed during my hours of unproductive labor, wasn’t up to its task of deadening sensation.

When he finally deigned to make an appearance, he didn’t say hello or introduce himself. He just dived right in. It was, thankfully, a quick procedure, and when he finished, he removed his gloves, tossed them to the floor like a mic drop, and walked away.

When the time finally came to give birth, all did not go as expected, and I ended up in the OR for an unscheduled C-Section. My epidural, which I had placed during my hours of unproductive labor, wasn’t up to its task of deadening sensation. I felt my surgery.

Not just “pressure.” Not just tugging or pulling. I felt everything. It was horrific. A nightmare come true. There was nothing they could do about it until they cut the umbilical cord, though, so I had to endure. When my baby was finally separated from me, the anesthesiologist gave me a dose of ketamine, which rendered me completely high. I didn’t hold my baby for three hours. Didn’t nurse him for almost four hours. I didn’t even touch him because I was completely out of my gourd and had no idea what was going on.

Suffice it to say, when my husband and I began discussing having another baby, I was... apprehensive.

When I finally became pregnant again, two years later, I was a wreck. I had a different doctor this time, and she convinced me that I didn’t need another cerclage, that I could do progesterone treatment instead. I was elated. The idea of being exposed again, of waiting in a room full of strange men while everyone tried to act like my body wasn’t on display, was traumatizing more than I can possibly say. So progesterone therapy, even though it meant giving myself very painful injections once a week for 25 weeks, was a welcome alternative.

For the majority of my 3rd pregnancy, I was afraid to move. I was afraid to lift. I was afraid that every twinge, every ache was the beginning of preterm labor. As my pregnancy progressed and my estimated due date loomed closer and closer, I began having anxiety attacks whenever I considered the possibility of having to have a C-Section. My OB, who I think must be an angel, gave me her personal cell number and email address and was available to me whenever I needed her. And I made ready use of her contact info.

I was a basketcase. Completely spun out for the duration. I cried and panicked and over-thought.

I would get caught up in swirling thoughts, intrusive thoughts, about all the ways my pregnancy could go wrong. I was waiting for Murphy’s Law to come at me again.

But to my surprise, my son was born vaginally and with no complications.

I hoped having a perfectly textbook birth would help me move beyond my pregnancy and birth anxiety, heal some of my trauma. Nope. It didn’t. Any time I think about being pregnant again, giving birth again, I break out into a sweat. When I consider all the things that could happen, all the ways pregnancy and birth can go wrong, I know I’m done.

As much as we’d love another baby, I’m done.

If you like this article, please share it! Your clicks keep us alive!
Tags
pregnancy
multiples
c-section
cervical cerclage
epidural fail