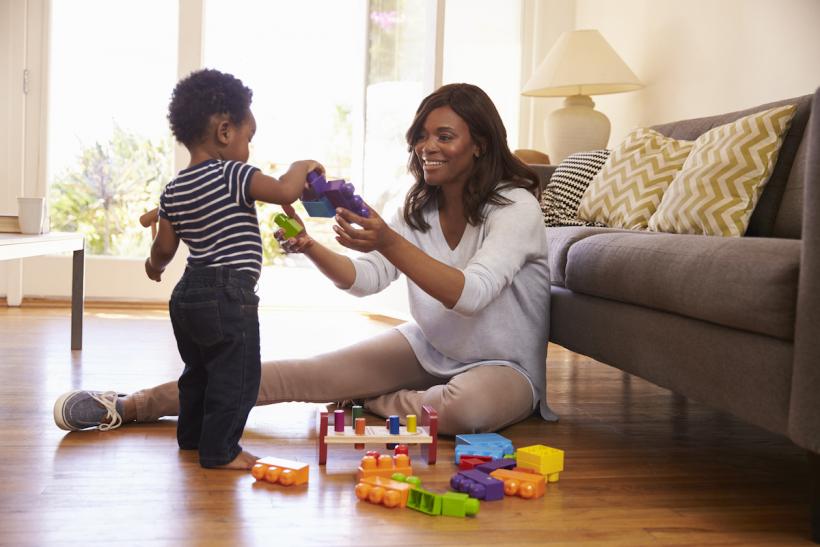 Nothing will make you crave life balance like having kids.

“You need to come home right now,” I sobbed into the phone, no doubt sending a jolt of panic into my poor husband while he sat at his desk in his air-conditioned office with the free coffee and free access to adult conversation. I hated him at that moment.

“I’m so done,” I told him. What I meant at the time was that I was done “circuit training” my then 10-month-old son, Vince. He was at that stage where babies are ready to walk and frustrated as fuck at not being able to do it and are, hence, utterly restless and impossible to keep entertained for longer than 10 minutes. I rotated him from floor to bouncer to jumper to lap and back again, unable to finish a thought, let alone a meal that hadn’t grown cold or soggy in days.

Yet, when those three words came out of my mouth, they stuck their tiny claws out and latched onto the idea of being a stay-at-home mom at all. Was that what I was done with?

When I became pregnant, I was a copywriter at a small fashion jewelry company. I asked for a six-month maternity leave, not at all sure if I would be coming back. After all, the pay was little, and daycare was expensive. Mostly, I just had no way of knowing whether at the end of that six months I would be blissfully adjusted to motherhood and totally bonded with my baby or if I would be banging my office door down to reclaim my cubicle at 9 a.m. sharp.

It’s amazing how well you think you know yourself until life is about to throw something new at you.

Motherhood bliss is what happened next. Sure, the first few months are like a drug-addled blur of poop explosions and night feedings and the largest and nastiest piles of laundry you have ever seen in real life or fiction. But holy shit did I like my baby. He was happy and relatively easy. Being able to gather with other new moms to marvel at these tiny creatures and how they were changing us as human beings was stimulating enough. Keeping a growing tally of new things that would make me cry was fun.

This was an exciting time. New baby, new community, new me. I let the job go, thinking I could easily do this for at least a couple of years if this is what I could expect. If life could just deny its inherent nature and sit still for as long as I wanted it to, of course, I would be alright. Spoiler alert: It doesn’t. Neither do babies. All they do is change. Who would have thought?

Fast forward to my melt-down over the phone with my husband. He hurried home that day, and I immediately started looking for jobs. In retrospect, this was downright compulsive. I had been having a couple of rough weeks. It was maybe my first rough patch with staying home. But I think I instinctively knew there was more to it. The smart thing would have been to unpack it all before trying to fix it. But there I was signing on for major surgery before I even had a confirmed diagnosis.

My existential crisis was about to become an episode of House.

I took the first full-time copywriting job I was offered, despite terrible pay and a hellish commute. That lasted a week. The transition from having my baby attached at the hip to seeing him less than anyone in his life is something I then realized a lot of moms go through. I thought I should “suck it up.” Since we could get by without my income, however, I questioned why I would put myself through this needlessly.

My self-diagnosis shifted from needing my professional identity back to achieving the elusive bitch that is life balance. Maybe I didn’t need prestige or a title to feel validated.

Maybe I just needed an excuse to get out of the house, child-free, for 15 hours a week.

My next stop was working at a secondhand clothing store. This seemed like a good fit. It was a cool job with cool people, little stress and manageable hours. One month in and this malcontent film started to crust over my entire life. It took me another month to realize that I felt wasted.

I really had no way of preparing for how passionless my existence had become despite the wellspring of love in my life. It just didn't make sense. I loved my husband then more than ever before, and I adored my son. But "ability to love" was never something I put on a list of personal attributes. It wasn't something I felt was a gift or an asset. My real gifts and assets — my talents, my mind, my ambitions — felt like they were rotting away. Worse than that, I felt completely ungrateful. After all, I didn’t need to work, and I was finding jobs easily.

It felt like I had nothing to complain about, but also like my life was falling apart. The more depressed I was, the guiltier I felt, and vice versa.

There were many therapy sessions and many jobs after this. Through all of that, I came to figure out that I was hunting for what seemed like a unicorn — an engaging part-time writing job with a decent commute and decent pay. It took time, but I did find it. What happened next was the first good surprise in this entire messed-up journey.

I bloomed. I made new non-parent friends. My wardrobe started to evolve. I started exercising more. My skills felt challenged, and my ideas were validated. My favorite day of the week was my day off, where it was just then-two-year-old Vince and me. That was the real shock.

I had no idea finding myself again would also uncover a better mom.

Nothing will make you crave life balance like having kids. Coincidentally, nothing else makes it harder to achieve. Things have changed yet again. I said goodbye to that job, which I truly believe saved my life, after two years. A few months ago, I went freelance to dedicate more time to my fashion blog. Things are back in a state of imbalance since I again find myself thirsting for IRL social interaction. But I’m doing what I love, I’m parenting how I want to parent, and if I’ve learned anything from my postpartum identity crisis, it’s that I just need to be patient and give myself time to figure out which type of unicorn I should be hunting.