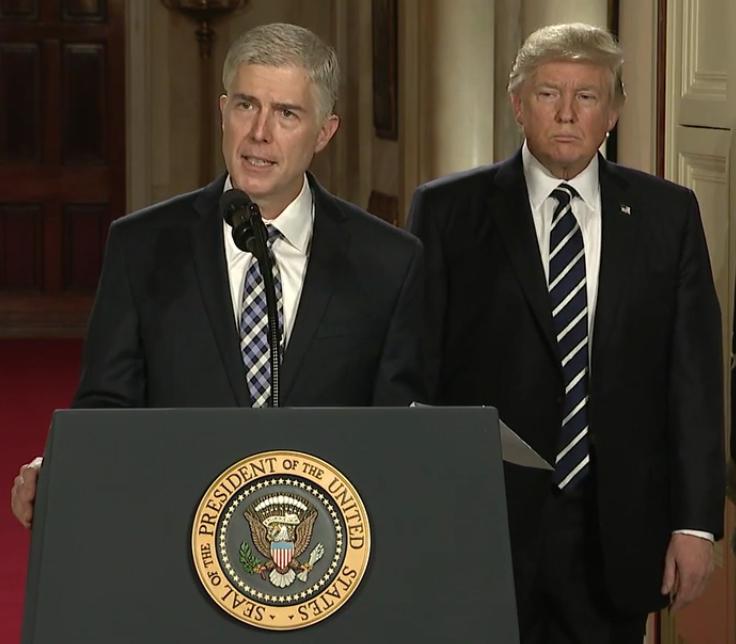 The nuclear option is definitely on the table for SCOTUS nominee Neil Gorsuch. (Image Credit: The White House via Wikimedia Commons)

Buckle up folks, the Senate Democrats just announced they have enough members opposing confirmation of Supreme Court nominee Neil Gorsuch to filibuster the vote this week. That means the going is about to get weird in the Senate. And we all know what Hunter S, Thompson said: when the going gets weird, the weird turn pro.

So here’s the deal on what all this means, procedurally speaking. Filibuster is a right given to the minority party in the Senate. It comes from a French word for pirates who pillaged the Spanish colonies in the West Indies, and it now means a tactic that can be used to sabotage Senate proceedings.

Anyway, there are two types of filibuster. There’s the made-for-Hollywood kind where a noble senator takes to the floor and begins talking, usually in protest of some action Senate leadership is planning to take. The senator then refuses to pause until eventually the opposition capitulates or opens a channel for negotiating a compromise.

The other kind of filibuster is less dramatic and involves something called cloture. Cloture is from the French word for "closure," and refers to votes senators take to end debate around a bill or a nominee. As cloture rules are currently written, 60 senators need to agree to end debate and bring the item for a final vote. Without cloture, the item stalls and no final vote can be held.

That second kind of filibuster is what the Democrats want to do about Neil Gorsuch.

Of course, this isn’t the end of the story for Judge Gorsuch. Majority Leader Mitch McConnell has signaled that he is prepared to rewrite Senate rules to remove cloture from deliberation on Supreme Court nominees. This is what everyone is calling the "nuclear option," because it blows up Senate rules and traditions.

Of course, refusing to give hearings to President Obama’s nominee last year also blew up Senate rules and traditions, but obviously blowing stuff up doesn’t bother Mitch McConnell. (Or Harry Reid, in fairness. The former Democratic senator "went nuclear" in 2013 by ending the filibuster for all other judicial nominees.) And why stop with one kind of blowing stuff up? To bring us back to Hunter S. Thompson, Mitch McConnell is ready to turn pro with the weird.

If the cloture rules are changed, we’ll have Justice Gorsuch sitting on the SCOTUS by the end of the week. Slightly before that happens, I imagine Democrats will be sending out fundraising emails about the outrage perpetrated by McConnell and friends when they a) refused to confirm Merrick Garland, and, b) changed the Senate rules for Neil Gorsuch.

The Dems know they aren’t likely to win this but they — and I — want to make sure everyone knows that the only way McConnell can get what he wants is to change the rules in his favor.

And that is, in the words of Donald J. Trump, sad.