Ask Erin: How Should I Act When I Meet My Best Friend’s Awful Boyfriend? 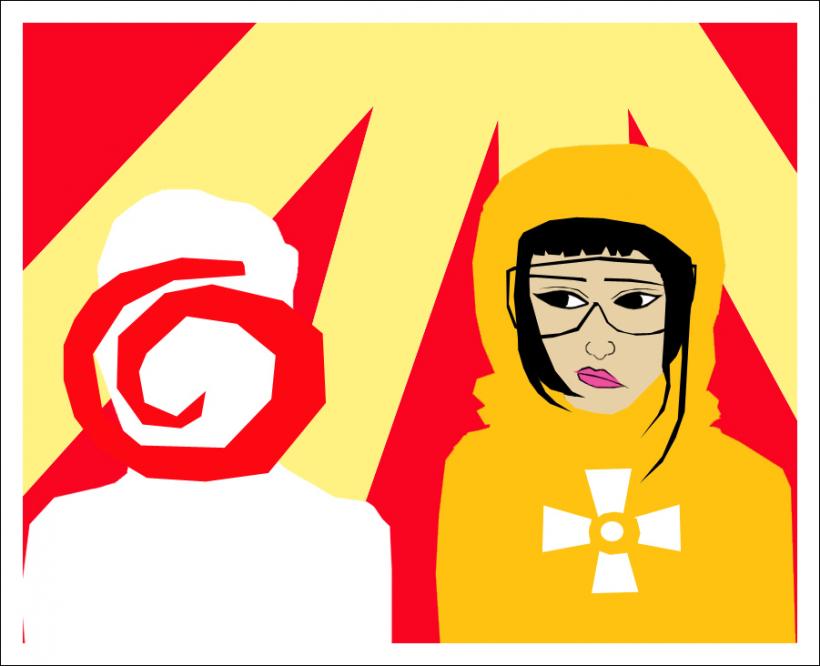 Hoping you have advice in this unpleasant situation: my best friend from college has been dating this guy, let's call him F, for almost a year now, and it's clear to me that their relationship is unhealthy at the very least.

F is manipulative, controlling and disregards her feelings and needs. He gets angry and upset when she rebuffs other people (they are monogamous) if she doesn't explicitly tell those people that it's because she has a boyfriend she loves (as opposed to simply not being interested, not giving any explanation, etc.). He believes that's he's the only reason she wouldn't go out with somebody (as opposed, again, to simply... not being interested).

He struggles with depression and mental health issues, but constantly uses them as weapons to gaslight her, while he disregards her feelings. When he is mad at her for something (justified or not), he leaves and has his "alone time," during which SHE isn't allowed to contact him in any way for any reason, but he can text or call her as he pleases. And if she violates these rules, he says she isn't supportive of his self-care and that his self-care looks like whatever he says it looks like.

If she voices concerns about his mental health, he accuses her of using his depression against him and makes it look like she thinks he's a bad/damaged person, which just makes her feel guilty and apologize.

He has also said derisive things about her friends and even told her he couldn't hang out with her two closest friends anymore (though he later took this back), despite the clear distress and ambivalence this caused her.

I could go on and on... but the point is, I think their relationship is deeply unhealthy and I worry about her.

We have had our trust issues in the past, and being honest with her is really important to me. To that end, I had voiced these concerns multiple times, both during times when she and F were fighting and times when things were fine. I have tried to be as respectful as possible and to frame things in neutral ways (instead of screaming HE'S AN ASSHOLE BREAK UP WITH HIM).

She has received it really well, and seems to take away a lot of things to consider, but insists that she loves him and won't break up with him. Now, I understand from personal and professional experience how long it can take for somebody to leave an unhealthy relationship. I have told her I would be there to support her in whatever way she wants.

The real reason I'm writing to you is this (sorry it took so long to get here!): She and I currently live in separate cities, but at the end of this month, my spouse and I are moving to the same city as her. I have never met her bf in person, so this will be the first time, and I don't know how to act. It's much easier to keep my mouth shut about things long distance, but I already know I won't like him (he also seems extremely white-cis-male entitled and somewhat misogynist, and I have very little tolerance for that with anybody), in addition to being extremely protective of my friend.

Do I let things go when hanging out with him, that I wouldn't let slide for other people?

I don't want to make my friend choose between me and her bf, because I know that will just make things harder for her and could make her feel isolated and drive her to him. But I basically HATE this guy and don't know what to do. Help!

Thanks for listening to this long rant!

First of all, as someone who's struggled with clinical depression my entire life, it really pisses me off when people use their mental illness as an excuse for behaving badly.

There are few things more uncomfortable than being a witness to a friend’s or family member’s unhealthy or abusive relationship.

Years ago, I had a good friend who was in an abusive relationship. He was controlling and emotionally abusive (and physically intimidating if not outright physically abusive). My friend and I had countless conversations. She knew it was toxic, but she couldn’t extricate herself. She clung to the love and ignored the rest.

And sadly, it did affect our friendship. Eventually, she got out, and I hope your friend will, too.

Now, there’s not much you can do to get her to that conclusion any faster, BUT, you can and should set boundaries.

So, how to act when you meet him? Sure, you can go in with a “clean slate.” But you certainly don’t need to act like you like him. He will likely be on good behavior around you, at least at first. Assholes like him usually are.

Don’t let things go when hanging out with him that you wouldn’t let slide for other people.

You can do so kindly, but firmly. You can’t make your friend enforce her boundaries, but you can and should stand up for yourself and your boundaries.

You don’t have to make her choose between you and her boyfriend. You also do not have to spend any time with him. Sure, you should give the hang out a try, to say that you did. But, if it’s as awful as you are anticipating, there is no need to force yourself to do it again.

You can let your friend know that you care for her, that you want to spend time with her, but will only do so without his presence.

And, yes this runs the risk of her pushing you away.

But, you can’t stand by and condone abusive behavior so that you can be in her life.

Lastly, when the day comes that she needs your friendship, I know you will be there for her. I would gently but firmly suggest she get some therapy. If you are that conversation with her, about what you are observing, encourage her to see a therapist, that “maybe you’re wrong,” but a professional can help her sort things out.

Good luck with your move and keep those boundaries intact!

The information within Ask Erin should in no way be interpreted as medical advice because I'm not a medical professional. But I am here to help — to share with you the wisdom I've gained after years of making mistakes. If you have a question for me about relationships, addiction, dating, friendship, depression, sex, consent, Aquamarine, a summer movie to watch in bed with air conditioning, or anything at all, use the contact form below or email me at askerin@ravishly.com. As always, your anonymity is golden. Lastly, I’m so excited to share my Ask Erin Self-Care Guide, free when you sign up for my weekly newsletter. xoxo

If you like this article, please share it! Your clicks keep us alive!
Tags
Ask Erin
friendship advice
Friends
toxic relationship
boundaries