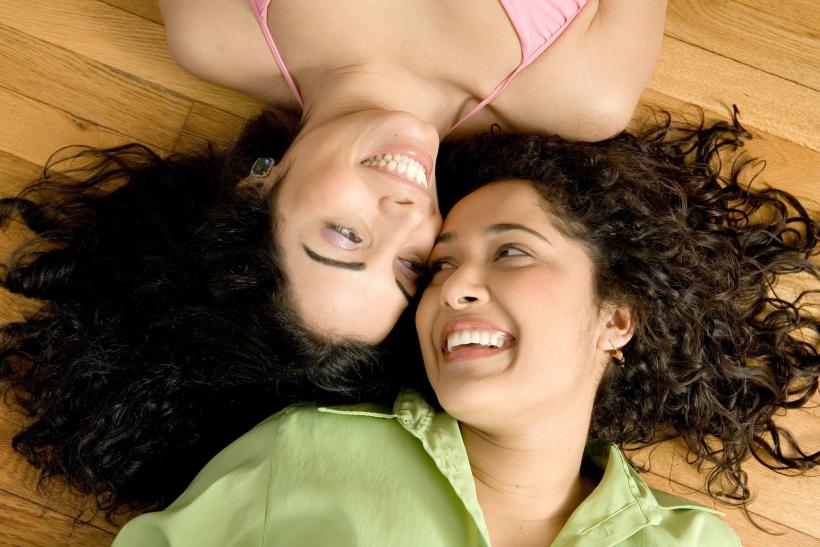 Brain science may not be rocket science, but it's pretty darn fascinating, and new research on neurological activity based on fMRI scans says you and your best friend are probably right when you tell people you get along so well because you're simply "on the same brain wave."

First, let's look at friendships, especially the ones we share with our very best friends. We've all essentially got one. Heck, I've actually got two! Jesse and Alex.

Alex was foisted upon me by chance in 2001, as the random roommate assigned to the same quarters we both lived in for our freshman year of college. Having known each other now since the age of 18 makes for a connection unlike any other in my life. In fact, we're still roommates to this day!

I met Jesse when I moved to New York back in 2006. We worked at the same place and quickly bonded over our shared passion for cult documentaries and beautifully prepared baked good.

In short, I really lucked out in the best friend department, and I've always just assumed that's because it's how things were meant to be.

That might be the case, but it turns out there may be something else going on when it comes to how we pick our closest of friends.

Believe it or not, while you might think that you and your bestie found each other and connected solely because fate said it must be so, the truth of the matter is that science has quite a bit to say about how and why we select the people we do as our very best of friends.

Human beings typically prefer making close bonds with people who are a lot like ourselves.

I'm not just talking shared interests, either. I'm talking about shared traits like being about the same age, the same level of education, and coming from roughly the same racial, religious and socio-economic background.

It's latent evidence of the animal inside each of us. We see our personal safety as most guaranteed when flocking together with herds of folks who are as much like us as possible.

That's not all science has to say about friendship, however.

A new study conducted by cognitive scientists at the University of California, Los Angeles has taken everything we know about how close we feel to our best friends and blown that noise right out of the water.

According to Dr. Carolyn Parkinson, who conducted the research study with colleagues Thalia Wheatley and Adam M. Kleinbaum of Dartmouth College, best friends not only share similar outwardly measurable aspects of their identities, but they also happen to display remarkably similar patterns of brain activity.

You know what's it like when you and your bestie are sitting across a room from each other and something suddenly catches you eye and you just know she had to have noticed it, too? Turns out she probably did because your brains produce a startlingly similar response to "everyday, naturalistic stimuli," i.e. things happening around you.

In order to conduct their research, Dr. Parkinson and her team "started with a defined social network: an entire class of 279 graduate students at an unnamed university widely known among neuroscientists to have been the Dartmouth School of Business."

Next, 42 out of the original 279 students agreed to participate in a brain scanning study during which "an fMRI device tracked blood flow in their brains [as] the students watched a series of video clips of varying lengths, an experience that Dr. Parkinson likened to channel surfing with somebody else in control of the remote."

In reviewing the resulting scans:

"Dr. Parkinson and her colleagues found strong concordance between blood flow patterns — a measure of neural activity — and the degree of friendship among the various participants, even after controlling for other factors that might explain similarities in neural responses, like ethnicity, religion or family income ... Using the results, the researchers were able to train a computer algorithm to predict, at a rate well above chance, the social distance between two people based on the relative similarity of their neural response patterns."

In layman's terms, the closer students were to each other in terms of friendship, the more likely their brains were to respond in a similar way to what they viewed onscreen, whereas students who barely knew each other showed remarkably incongruent responses.

If this all sounds like science fiction to you, that's completely understandable!

Here you were thinking all along that it was her willingness to let you borrow her toothbrush was the thing that cemented your bond as buds.

It's important to note, however, that "Dr. Parkinson emphasized that the study was a 'first pass, a proof of concept,' and that she and her colleagues still don’t know what the neural response patterns mean."

Next on deck for the team is a plan to try the same experiment on incoming students to see whether ot not they can accurately predict which will become friends over the course of their time at the school.

If you like this article, please share it! Your clicks keep us alive!
Tags
Affects Your Closest Friendships