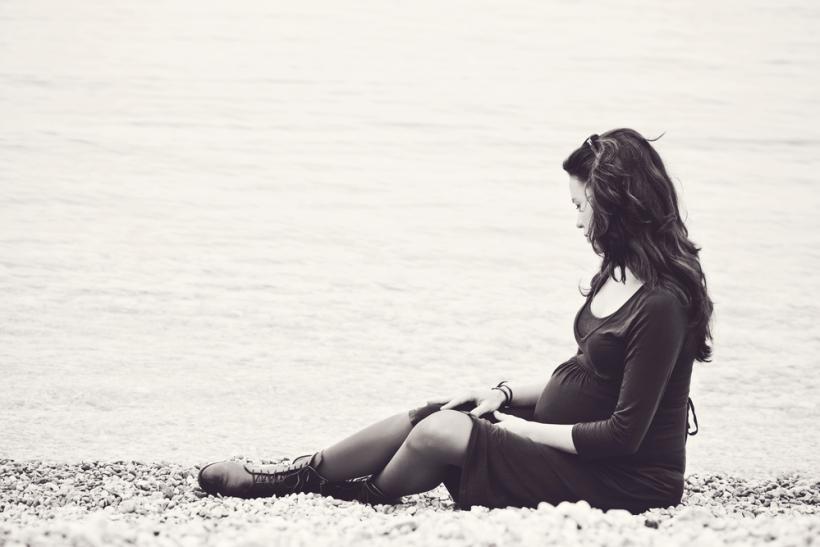 There's nothing more surreal than being depressed and pregnant during what was otherwise one of the happiest times of my life.

Of all the times I’ve been depressed since I was first diagnosed with the illness in my late teens, the most intense, vicious period hit me during pregnancy.

Within a few weeks of reacting to a positive pregnancy test result with elation, I was crumpled in a chair in my doctor’s office clutching a prescription for medication that might or might not harm my unborn child and getting an emergency referral to a psychiatrist.

There's nothing more surreal than being depressed during what was otherwise one of the happiest times of my life.

It’s like a bad dream — a dream in which you’re looking through the window of a house where an amazing party is taking place. You want to be inside, chatting, dancing, celebrating — but you can’t figure out how to get there. You push your hands against the glass even though you know it’s futile. Eventually, you turn and walk away because it hurts more to stay and be an outsider.

But it’s not a dream. It’s my reality, and it’s also the reality for an estimated seven to 20 percent of expectant mothers. My generation is 50 percent more likely to experience prenatal depression than our mothers were (or at least we’re more likely to admit that we have the illness).

During my first pregnancy, ten years after my initial diagnosis of depression, I was off medication, and the black dog stayed away — but bounded back with a vengeance postpartum. Three years later and pregnant again, I experienced one of my most extreme, debilitating periods of depression.

It was 2010, and postpartum depression was finally being talked about — actress Brooke Shields’ brave disclosure of her own experience with the illness in 2005 can never be underestimated.

But prenatal depression? Not so much.

While some of my friends were starting to talk openly about their postpartum depression, nobody was discussing depression during pregnancy. It wasn’t being written about or discussed in the media. I couldn’t find awareness campaigns or support groups.

Everywhere I looked, I was getting the message that depression doesn’t strike until after the baby is born.

It’s difficult not to feel guilty when you battle an illness far too many people still refuse to acknowledge exists — an illness that carries such stigma.

When you’re depressed and pregnant, the weight of that guilt is even heavier.

I attacked my exhausted, malfunctioning brain with questions I couldn’t begin to answer. Should I even be depressed? What was wrong with me that I was depressed at a time like this? What sort of mother was I to take antidepressants that carried risks — minimal risks, admittedly, but risks nonetheless — to my innocent child?

It helps a little that today, eight years after I first experienced prenatal depression, we do talk about it. With increasing awareness has come a welcome change in how medical professionals view women’s mental health, both during the prenatal and postpartum period.

“Based on the evidence we now have available, we have to consider that the biggest risk to moms and their babies may not be at risk from medication but the risk that mom remains significantly depressed or struggles with other debilitating symptoms during pregnancy and postpartum,” says Dr. Elisabeth Netherton, staff psychiatrist at The Menninger Clinic in the Hope Adult Program and assistant professor in the Menninger Department of Psychiatry and Behavioral Sciences at Baylor College of Medicine.

As I write this, I'm pregnant again. I’ve made it to my third trimester on a very low daily dose of antidepressant, but there has been a return, in recent weeks, of those daunting, grey, can't-get-out-of-bed days. Every night, I congratulate myself for getting through the day and hope I'll wake up the next morning able to function and to look after my two children and the baby girl growing in my womb.

Now, I talk about my illness. I don’t always want to. I can’t always find the right words. But I try because what made my first bout of prenatal depression so difficult was feeling like I was the only one.

By talking about our experiences, by asking for the help we deserve just as much as a mom-to-be who has gestational diabetes or high blood pressure or any other physical condition during pregnancy, we can make a difference — for ourselves, for our babies, and for other moms pushing their hands against the glass.

If you like this article, please share it! Your clicks keep us alive!
Tags
depressed
Depression
pregnant
pregnancy
mental health

A Letter To My Son, From Your Depressed Mother
Claire Gillespie