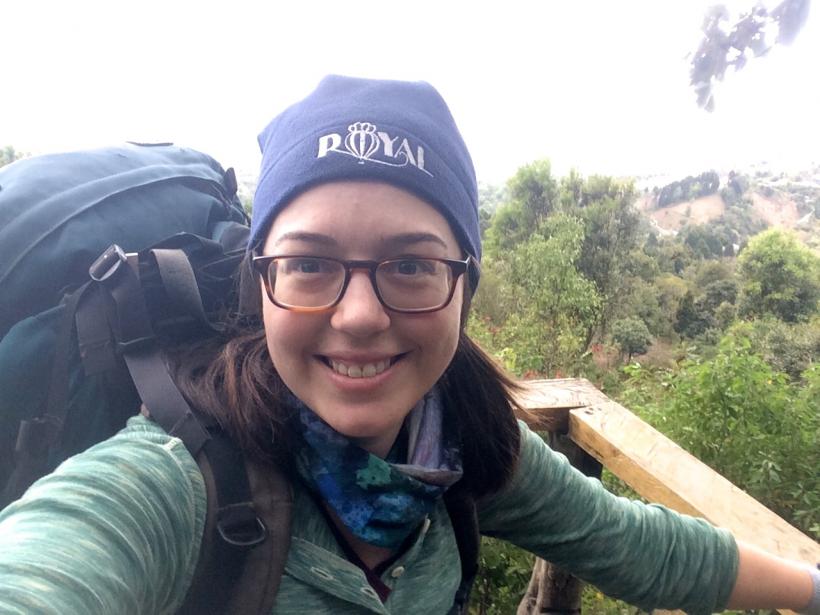 Image courtesy of the author.

My breathing hastened and my crying intensified. The elevation wasn’t doing me any favors. All I knew was that it was pitch black on a lava field in Guatemala and I’d lost my tour group.

I'm not a Crossfitter or a runner or a yogi. But I grew up dancing and swimming. I even completed half marathons and sprint triathlons over the years. I'm not athletic, but I've developed my own fitness routine as an adult made up of low impact activities. So I didn't worry too much about climbing Pacaya, dubbed Antigua's "easy" volcano hike.

I’d booked an overnight tour to Pacaya. We packed borrowed backpacks with warm clothing, food, water, and flashlights. Mine was heavy, but I thought I'd manage. Surely I’d carried this weight before, right?

Each step was slow, my legs now resembling petrified tree trunks, and my chest was tight. I tried not to look at the group ahead, ashamed to be holding them up

After an hourlong drive, it was time to start the second-hour hike to camp. I put on my weighty pack and laughed smugly at the “tourists” who opted to ride a horse to the top. But less than five minutes into the steep hike, I was winded. At 10 minutes, I stumbled on my knees, the pack’s weight lurching me forward. A ranger named Carlos helped me up and soon became my shadow, asking “Bien?” every time I slowed. The entire experience had been a lesson in humility, or perhaps humiliation.

I slowed down so much that the rest of the group was waiting on me. I felt guilty about ruining the experience they’d paid for and didn’t want them to miss the sunset. I relented to the words of the “caballero” and let him bring my pack up the volcano for Q100. I felt embarrassed and frustrated that my body, still allegedly in its 20s, wouldn’t cooperate. I tried to keep my baseball cap over my eyes and stare straight onto the uneven ground, willing myself not to cry.
And while getting rid of my pack should have been a relief, I still struggled. Each step was slow, my legs now resembling petrified tree trunks, and my chest was tight. I tried not to look at the group ahead, ashamed to be holding them up. The guide told me four more minutes, and we were at camp. I’d never been so relieved to see a campsite. Normally, that would be my personal hell.

Our guide set up camp, and we ditched our packs to see the sunset. I fell behind again but wasn’t bothered for the first 20 minutes. We saw the sky’s colors change over the obsidian mountain and I had a moment to pause for photos. Then our path went downhill to the lava fields, and it soon went dark. I got stuck behind a tour group going the opposite direction but had instructions to turn right.

By the time I stepped my way down the steep path with loose gravel and sand, with care, I didn’t see the path. With only my dim headlamp, I called out. No reply.

Panic set in until I saw a light flashing at me.

My guide came back to find me and asked if I was okay. “Yeah,” I replied, lying through my teeth.

The group had already roasted marshmallows over the lava, the evening's activity.  So I hugged my legs and watched the fire and magma bubble and spew from the top of Pacaya. Soon it was time to go back, traversing the same path I’d lagged behind in, this time in the dark. One of the park’s stray dogs kept me company until we got back to camp.

Over a dinner of pasta and wine, our guide told us about the summit, the most difficult part. We would leave at 4 am to see the sunrise. Where my limits had failed me before, they now kicked in with force. I was in pain from the “easy” hike, so there was no way I was ready to do something harder. Was it worth it for the sake of my bucket list and some photos? Instead, I bundled up in my sleeping bag, took an Ambien, and slept for 8 hours.

The next day, I was well rested but still shaken. The ascent was slow but problem free, and I arrived back in Antigua to shower and recover. I tried to figure out why the experience was so exhausting, physically and emotionally. Was it that I thought I was in better shape than I was? That I thought it would be easier? Or that I was affecting the experience of other people?

The rest of the trip went on without much drama, and I wrote about my experiences on my blog. I mentioned being left behind but having a positive experience. It was then that the tour company reached out to ask me to change parts of what I wrote. Among the comments were that “someone with an average level of fitness between the ages of 18-35 should find it easy.”

This is where I lost it.

Clearly you want me to know that I'm not of average fitness. But there is no “average” level of fitness. Average for an age range or nationality or gender? Telling customers that it’s an easy hike is misleading, subjective, and dangerous. It means that they set you up to feel like a failure if you do struggle and absolve themselves of the blame. I could have had a medical episode on that volcano, and no one would have known.

I'd never felt this level of body shame before, especially in a professional context. I’ve got a large chest, hips, and thighs that aren’t ideal for hiking. But I also struggled with ritualistic eating as a teenager and felt triggered. But rather than change what I wrote, I pushed back. I told them that they should take my criticism to make their tours better, not blame me entirely.

But I don't consider it a failure. I may have struggled, but I did climb it. Just because I didn’t keep up with a group of early young people in their early 20s doesn’t mean I failed. I set my own pace and also my goals.

I wanted to climb an active volcano, and I did just that.

I may not be what this company considers to be of "average fitness," but I wanted to share my honest experiences with others. I wanted them to know that you can't judge people's levels of fitness by appearances.

A conversation with my sister, a former guide, taught me that this is the point when you go one of two ways. Either you take it as a learning experience, working towards the next goal, or you figure out that this isn’t your kind of fun. I landed on the second one. And that's okay with me. I may find myself climbing another volcano one day, but I'll know to set my own limits and pace.

If you like this article, please share it! Your clicks keep us alive!
Tags
bodies
body shame
body shaming
fitness
Travel
body acceptance