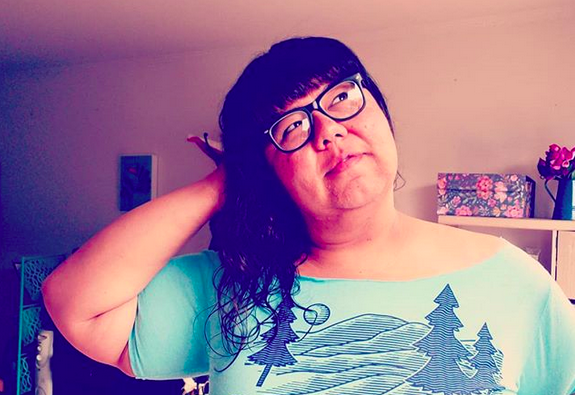 I received an email in my inbox recently from the Fat Studies Journal. It was a call for articles and essays on topics related to fat life, existence, and embodiment. The email listed a few potential ideas for submissions; among them was “fat people and compulsory happiness.”

The phrase made me put down my cactus-bedazzled mug of lavender mint hippy tea for a second.

I had a legitimate flashback to high school. Senior year. English. My class was comprised of about 20 nerds. We were talking about how different groups of people were portrayed in literature. As part of the exercise, our teacher asked us to name stereotypes of fat people. I hate that game. I guess it’s meant to get the truth out in the open when it’s normally hidden, but to me, each word feels like a punch to the gut.

The asshole next to me, Nathaniel, who took particular joy in reminding me about my fat girl status as often as possible, raised his hand.

“Jolly,” he said with a self-congratulatory enthusiasm, like he was proud of himself for having had the civility and restraint not to say one of the more impolite words he’d more commonly used to describe me.

I wondered if that was what he thought I was — “jolly” when faced with incessant dehumanization and cruelty.

Did he even understand his behavior was cruel? Probably not.

I had another flashback to high school. This time it was Christmas. I was part of the school band, and each year we did a Secret Santa. After weeks of exchanging anonymous notes, we’d all excitedly open our gifts in a circle for everyone to see.

That year I wasn’t the only fat person in the band — Arthur (“Art” for short) played the trumpet and was two years ahead of me. His Santa had sloppily wrapped his gift in a paper bag. I remember his excitement. He reached inside and pulled out a stick of deodorant. His face dropped — just for a second. I could see the disappointment, heartbreak, and embarrassment in that short, long moment. And then he recovered, put the mask back on, and began laughing out loud along with the thin guys who had been in on the joke. What a good sport Art was. He got slapped on the back for going along with this cruelty.

Happiness is a very important thing in the US. Growing up in a Mexican household, this happiness thing was considered a little weird. I learned from my grandparents (who raised me) that life was sad and difficult most of the time, and that joy should be savored because it was fleeting. Happiness is not a core value in Mexico, the way it is in the US. I felt the culture outside my home was relaying that if you’re not happy most of the time that something is wrong with you.

I think there’s a special kind of burden placed on stigmatized people to pretend that everything is A-Okay.

Would I be smiling if I was oppressed? Heck no.

I can’t speak for all fat people, but I think a good many of us feel pressure to be (or at least seem) happy all of the time. I feel this serves a few key purposes:

2. Happiness is considered a very important American value — right up there with health. When we are visibly happy, we show that we understand that value and want to be part of the culture on the culture’s terms. We get rewarded for sunshiney displays of resiliency.

3. Happiness serves to put bullies and bigots at ease so they don’t have to accept responsibility for the gravity of their behavior or to show the people who hate us that we can pick ourselves up and dust ourselves off no matter how incessant or hateful the behavior we experience. These are two sides of the same coin, by the way.

I don’t seek to position fat joy as a myth (because it’s not), but I do want to state the obvious: no one is happy all the time, and no one has to give into pressure to perform happiness (because performing is super exhausting). Happiness is one emotion of so many. All of us feel happy at least some of the time.

Humans feel a range of emotions, however, from bliss to rage. When we allow ourselves and others to see our nuance, complexity, and soft emotions, we let in our precious humanity. And that’s more important than all the smiley face emojis in the world.

I ran into Nathaniel when I was a freshman in college. Without a modicum of shame or self-awareness, he hit on me. I shut it down. Hard. I never saw Art again after high school, but I hope he moved away like I did.