Ask Erin: I Feel Like I'm Parenting My Husband 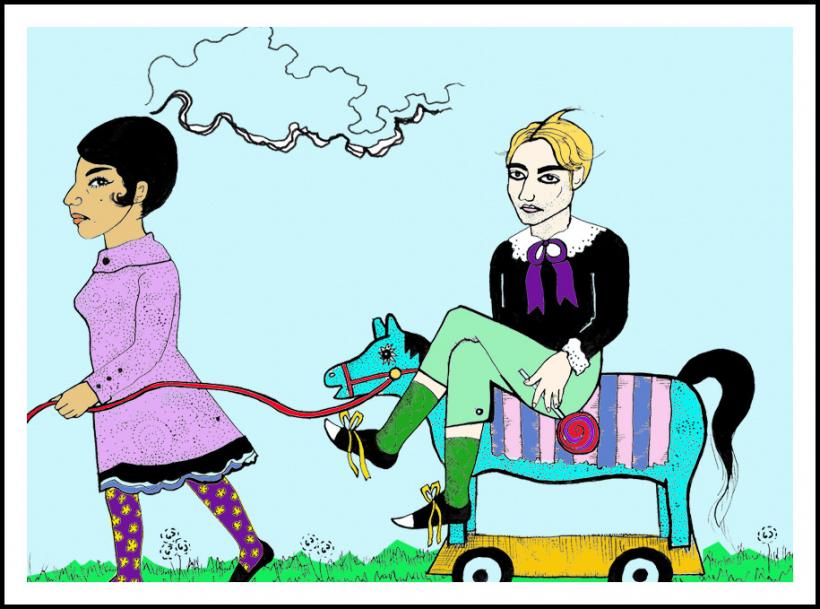 The longer we're together, the more I feel like I'm parenting my husband. (illustration: Tess Emily Rodriguez)

My husband and I got married about three years ago, after five years of dating. I adore him — he's funny, intelligent, and kind.

But the longer we're together, the more I feel like he never mentally or emotionally aged beyond 13.

He's been at the same job since he was 19 (he's 38 now) and makes no move to try finding a better job, though he has a few degrees. Rather, he prefers to spend his free time playing video games. Not something I have an issue with to a point — but he also works second shift, which is a great opportunity to go for interviews, etc., but he doesn't do anything.

If he were happy in his job, it would be a different matter, but it's not challenging or creative (his majors are art-related), so he's frustrated with it. To top it off, his salary is so low that I make almost 3x what he does, so the pressure is on me to make enough to pay most of our bills including mortgage and both sets of student loans.

On top of that, he struggles with anxiety and depression. I do as well, so I try my best to be understanding and patient, but I can only do so much. He finally started seeing a therapist, which is great, but I think he's looking for a quick fix that doesn't exist. The day or two after therapy, he's happy, upbeat, etc. — then there's the inevitable fall, including claims that therapy isn't working, he can't be fixed, etc. But he's only been going for a few months.

Additionally, he decided a couple of weeks ago to tell his closest friend that he's going to therapy when we were with him and his wife for dinner. We talked about therapy, etc. together for a few minutes, and then the conversation moved on. Later on, he confided to me that he was upset that they didn't make a bigger deal out of it. He was also upset that they didn't give him a present on his birthday until I reminded him that they were taking us to a concert as a joint gift later this year.

I'm at my wit's end. I want to be loving and supportive, but I feel like I'm turning into more of a mother than a wife.

No kids in the picture; we're childfree, which is probably for the best with all this going on anyway. But I feel like I can't complain about my day with him, and politics are COMPLETELY off the table — anything like that will throw him into a downward spiral, and then we'll both be miserable.

I really don't know what to do. He knows he needs a different job, he knows therapy isn't an overnight remedy... yet I'm still picking up these pieces most days off the week. Please help!

You Might Also Like: Ask Erin!: Should I Tell My Lover That His Wife Has A Big Secret?

It’s easy to understand why you’re frustrated; I would be too! Let’s unpack this a bit.

I am going to go out on a limb here and say that all of his issues of immaturity really stem from mental health stuff that’s not been adequately addressed.

The inability to take action when he is unhappy with a job he’s stuck with for almost 20 years, the hurt feelings when he doesn’t feel adequately acknowledged, the need for a quick fix, the tendency to spiral, and obviously the anxiety and depression — they are all strong indicators to me that this has everything to do with his mental health.

That’s where the focus should be. So, it’s great that he’s finally in therapy. Now, therapy might not be enough. I am not a doctor, but I would encourage you to encourage him to see one — a psychiatrist. Maybe he needs medication; maybe he needs cognitive behavioral stuff, maybe he has childhood crap (spoiler alert: we all do) that needs to be processed. The point is he should be doing that with professionals and not his wife.

You are feeling more like a mom than a spouse, and that is not a recipe for a happy marriage.

And there’s nothing sexy about being the one who has to pick up the pieces every day. A marriage should be a partnership, and right now, it sounds like you have to shoulder a lot of the day to day responsibilities alone.

First, if you are not already in therapy yourself, please do that. You need somewhere safe to process and unload, too.

Second, a 12-step support group like CoDA could be really helpful. Their whole purpose is supporting healthy relationships. And that type of peer support is priceless when you’re getting re-acquainted with setting boundaries in your relationship.

Third, I would get busy on those boundaries. Communicate to your husband what you need and want in the relationship. Couples therapy would be great, too. (But, def don’t skip the individual therapy.) You have let many of your boundaries slowly slide over time because it’s just been easier to take care of things, not rock the boat, and make things smooth for him. But not setting boundaries isn’t helping either one of you.

Boundaries in any relationship are integral to feeling safe and loved.

Kids, friends, siblings, bosses, romantic partners, and, yes, even parents need boundaries. As someone who grew up with sloppy, mutable, mercurial boundaries, I can tell you that I felt unsafe, unloved, insecure, and lost. I taught myself boundaries over the years, mostly after I had my first kid. Once I learned how to set my own and respect those of others, my life became 100 times easier/happier.

So take the time to figure out what your boundaries are, communicate them clearly, and don’t accept anyone, especially your spouse, ignoring them.

I have said this before, and I will say it again: Don’t ever apologize for asking someone else to respect your boundary.

The information within Ask Erin should in no way be interpreted as medical advice because I'm not a medical professional. But I am here to help — to share with you the wisdom I've gained after years of making mistakes. If you have a question for me about relationships, addiction, dating, friendship, depression, sex, consent, old headshots, Iolite, what I’m reading, or anything at all, use the contact form below or email me at askerin@ravishly.com. As always, your anonymity is golden. Lastly, I’m so excited to share my Ask Erin Self-Care Guide, free when you sign up for my weekly newsletter. xoxo

If you like this article, please share it! Your clicks keep us alive!
Tags
Ask Erin
advice
relationship advice
maturity
immature
boundaries