Having A Cat Makes Me Feel Better About Being Alive 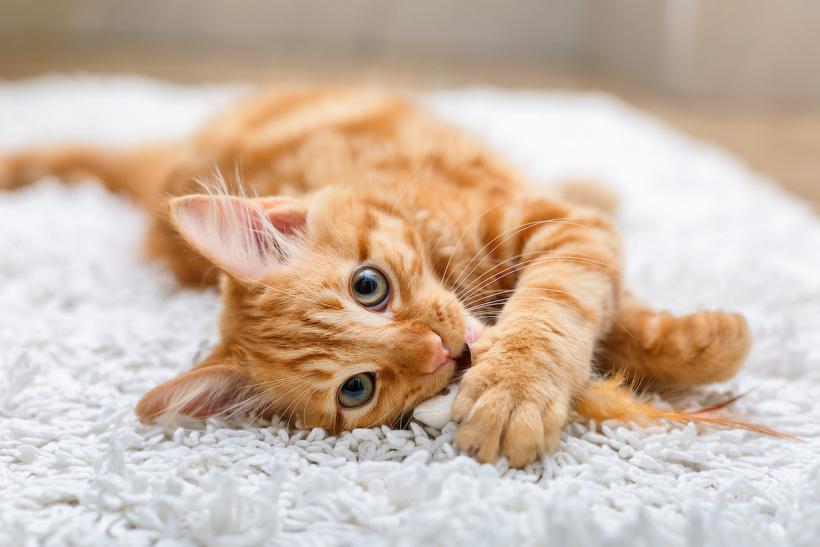 There’s a story in my family about the time that my cousins Rob and Lauren’s one-eyed cat, Fluffy, alerted them about a fire and basically saved their lives. I don’t have a story like that, although I do take credit for being the creative toddler who aptly named Fluffy because of his long tabby fur.

My cat stories are the quieter ones.

My cat stories are about Winnie, my fat tabby cat, curling up next to me in my bed even though he wasn’t allowed to, and me finally falling asleep with tears on my cheeks, exhausted.

They’re about Munchkin, Winnie’s brother, walking around my kitchen with my hamster on his back, completely unaware that rodents were supposed to be his natural enemy.

"There were countless times when, in middle and high school, I turned to my cats, especially Winnie, for comfort."

They’re about how I told Winnie that I was queer before I told anyone human — late at night, in my room, after writing it down in my journal. “You won’t stop loving me if I’m gay, will you?” I asked him. He replied with his signature loud meow.

I’ve been a cat person my entire life. If you ask anyone who knows me, they’ll say it’s probably genetic. My mom loved cats, and so did her mom. My mom was actually a little embarrassing about it — she had a special “voice” she used to narrate our cat’s thoughts and often wore oversized sweaters with cats on them, the kind that a grandmother gifts you at the holidays that you stuff in a closet because you never want to see it again. It’s no surprise, then, that I’ve had a cat since I was old enough to talk, and named my second cat after Thomas O’Malley from The Aristocats.

My love of cats definitely started because they’re cute and have pretty strange personalities, and as a kid, I loved to consume cat facts — like how they have specific meows for every human in their home. But it’s grown because cats are actually fantastic for my mental health.

There were countless times when, in middle and high school, I turned to my cats, especially Winnie, for comfort. Winnie was there for me when I started dating my first serious girlfriend. He sat by my feet while I talked to her on the phone for over two hours at a time, making jokes about anime and fantasy novels. I’d sit at my computer and work on homework after an exhausting day, but at least I had a cat on my lap, purring happily. At my lowest moments—when I was in eighth grade and lost most of my friends after coming out as queer, when I felt isolated and thought about ending my life—Winnie was sometimes the only reason I stayed alive. As much as I loved my dad, there was something so pure about the fact that Winnie didn’t judge me and always loved me unconditionally.

During my freshman year of college, I became a rape survivor. When I went home for spring break, Winnie was there like he usually was, waiting with his round belly and his loud meow. He cuddled up on my lap while I cried, and I finally drifted off to sleep holding him in my arms.

I was a senior in college when Winnie died, about a month in between the winter and spring breaks. It was the first time I’d ever come home to a house without cats, since Winnie’s brother had died a few years before. For my four years of college, Winnie had figured out my schedule: What times of the year I’d be back and when I’d leave, and my dad would find him sitting by the front door a few days before I came home, waiting for me.

I could barely handle being in the house without Winnie there, because all I could see were the spots where he used to belong—his food dishes by the fridge, constantly full because he was so fat; the chair he’d always sleep on that still had clumps of his loose fur on it; the mat by our shoes where he used to rest his head.

I was only at home for two months after college graduation before I moved in with my girlfriend so we could both start working and going to graduate school. A couple days after we moved, it was the anniversary of my mom’s death. We’d both spent the day at work, and when my girlfriend found me in our room, staring at my computer blankly, she asked, “Do you want to go to the animal shelter?”

We got in my car and drove to the Quincy Animal Shelter, where my cousins got one of their cats after Fluffy died. As soon as we entered the room for social cats at the shelter, I beelined for the window, where a chubby tabby was spread out on the sill. My girlfriend walked up to a long-haired black cat, who reached out and put her paw on my girlfriend.

As soon as we started talking to the shelter manager, we found out that the black cat and the tabby were a bonded pair of two-year-old cats who had grown up together from kittenhood. They needed to be adopted together. Even though we had an image in mind of our first cat—an orange male kitten—we knew we were in love. We came back two days later to apply to adopt the cats.

Within a week of moving into our new apartment, we were introducing our new cats, black long-haired Blue and fat tabby Gansey, to a place we hadn’t even completely unpacked yet. It took a little time for them to warm up to us, but now Gansey rolls over onto her back with her paws up whenever she sees us. And Blue crawls into the small space between us in bed at night, demanding to be held like a doll. In the last two years, they’ve been beside us for lay offs and graduate school applications, final exams and job applications, and a few family emergencies. They’re a part of our family, and they’re saving our lives one day at a time.