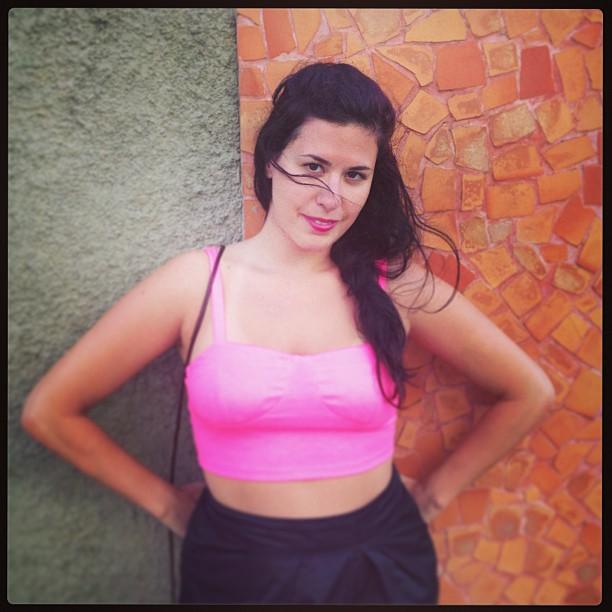 What started as a kind of "witchy" fever-dream about being "in love as a teenger"—a private diary-like entry to combat an "awful, fascist" job—has since evolved into Luna Luna, a sprawling haven of feminist fodder that is decidedly different. From love letters and literary analysis to sex dreams, poetry, art, beauty and death, the site leaves no stone unturned, no voice un-heard. Marie Basile prides herself on having no agenda, no topic-policing, no boundaries on what her 40+ writers have to say or dream about ... provided it's not fear or hate-mongering. In short, she sits at the helm of a lady-ship that's as fierce as it is fragile, angry as it is amorous. We're drinking the Luna Kool-aid deep.

Here's what the poet and founding editor had to say for her herself and her spell-casting website:

What's the idea behind Luna Luna, both in word and deed? How it did off the ground — did you feel like there was something "missing?"

Last July, when I was working in this awful, fascist job, I felt completely powerless. I was really missing having a project. I was craving something beautiful that connected me with others. One night, at around midnight, I sat down and wrote something completely random—something witchy and sad—about being in love as a teenager. I thought: this has nowhere to go. Most of the women's lifestyle (not fashion) sites I read are completely disinterested in beautiful writing or writing that isn't strictly about feminism or the political. Sites like Rookie were too young for me, and xoJane wouldn't publish something diary-like that lacked shock value, I felt.

I thought of Luna Luna as a diary, sort of, where you could be intellectual, artistic and confessional. I thought we needed a place that was friendly as it was feminist and progressive. I wasn't interested in "the right kind of feminism." I was interested in dialogue, being wrong, learning, sharing and connecting. It sounds saccharine, but if you connect with other human beings, beautiful things happen.

So, I started it that night and asked ten people I knew to contribute on the regular. The truth is I didn't start Luna Luna to fill a gap. I started it to feel whole. I started it for myself. When the wonderful writers continued adding content that really ended up connecting to readers, we knew we had something special. To this day the comments are so whole, nuanced, grateful and insightful. I don't know where this is going to, but I knew we started with amazing talent and a readership that seemed to be hungry for authenticity. We may not get the most hits (though we just celebrated 1 million!) but I'm positive we're doing something pure and service-oriented and aesthetically pleasing.

Tell me a little about you! Where'd you grow up, what'd you study? What are you up to in your free time when you're not Luna Luna-ing? How'd you end up in NYC?

I grew up in New Jersey. I'm a complete Jersey Girl at heart: beaches, diners, long drives with cigarettes down the highway. But, I had a bit of a difficult childhood; I was in foster-care during my teen years and went to two different high schools. It was considerably more awful than other things I've been through, but it ended up lovely. My life has a lot of wounds and I really believe starting Luna Luna has helped heal them. I have more faith in humanity now, which is a start.

I came from NJ to NYC in 2005, and lived down on the Brooklyn Bridge at Pace University. I studied journalism, English and psychology there, and I was the editor for the college newspaper. Actually, two of the editors I worked with there—DJ and Laura—have come on to join Luna Luna with me. They are beyond helpful, considering their lives are so busy as well! I moved to NYC because I wanted the electricity of it; now it has made me a bit tired. Now I want palm trees.

In any case, I feel like Luna Luna is in my hand all day—the Wordpress app, the email. When I'm not working on LL, I work in publishing by day. Mostly, I'm a poet. My newest book (and first full-length!) APOCRYPHAL, is being released in July. It is about sex and religion and parents and tropical nature and women and desire. So, I'm typically working on that. It makes me beyond happy. I perform quite often at literary events and edit a small press, Patasola Press.

I believe that women should not be regarded as objects. I believe that feminism is a kind of humanism; we should all be good to one another and accept each other as people and not bodies. I believe feminism is still a strange word for people right now, because people haven't really looked at what it means. As an editor for a women's site, you'd be surprised how many people conflate feminism with misandry. It is sad and ignorant. I hope we can change that.

What are you reading/listening to right now?

The arts are a huge facet of Luna Luna and I agree that that kind of arts-emphasis is largely absent from many feminist sites — do you have any theories on that?

Art is and has always been considered a "hard sell." Clearly it's lasted much longer than everything else we as society know, but people are afraid to dilute their sites with a focus on beauty, literature and ideas. It is hard to reconcile positive thinking with art because sometimes poetry isn't healthy. Sometimes cinema is marvelous but it's anti-feminist. Also, you have to hire people to edit and produce that content, and sometimes if you know your lists and your personal essays and your criticisms are working, why would you? I think some sites do a wonderful job of merging culture and lifestyle content with (occasional) book features and movie reviews, but I want to go beyond it; hopefully LL will expand and we will introduce people to really amazing things.

Have you discovered anything recently that's gotten you excited, angry, turned on or confused?

Right now I've been working on a few pieces about the Meredith Kercher trial—specifically, I've been writing about Amanda Knox and how the media/world perceives her. I am literally in awe and enraged by how she's treated and perceived and my goal is to illuminate not only why she is innocent but why our reaction toward her is problematic toward women and social justice in general. It's a rabbit hole and I want to explore it.

Of course I have to ask about your online course initiative and your belief that education should be innovative and inexpensive. When did you get that off the ground and how does it work?

I really do believe that people spend too much money on education. I don't make enough money to spend on expensive courses, either. So, for the time it takes me to connect with people, I can earn a small revenue and work with poets. I value my insight and I also value working with other people; hopefully in time I'll find a way to balance earning with giving in a way that is really truly fair for all involved.  It is in the testing stages now; I work one-on-one with writers and help them explore their own voices/push their own boundaries. I'm more of a guide, really. It is amazing. I've been teaching for Eckleburg Review, too, which is run from the Johns Hopkins' MA in Writing lit review. That's been a good learning experience. People are amazing and it's insane how much you can learn when you're "instructing" them.

We're also curious how you balance a 9-to-5 and a badass website — tell us your secrets, dammit!

I have no idea how I balance anything; sometimes it feels like my life is a blur, but I'm not interested in balance, rest or a conventional lifestyle. I thrive off of the fast-pace and insanity and the deluge of work. I think, at least for now. In truth, I use my iPhone a lot on the subway to get work done during long rides. I stay up too late. I drink mad amounts of coffee and wine and have so many incredible people around me. I think that's how I do it.

If you like this article, please share it! Your clicks keep us alive!
Tags
Luna Luna
Lisa Marie Basile
feminism
publishing
Art
poetry
Ladies We Love