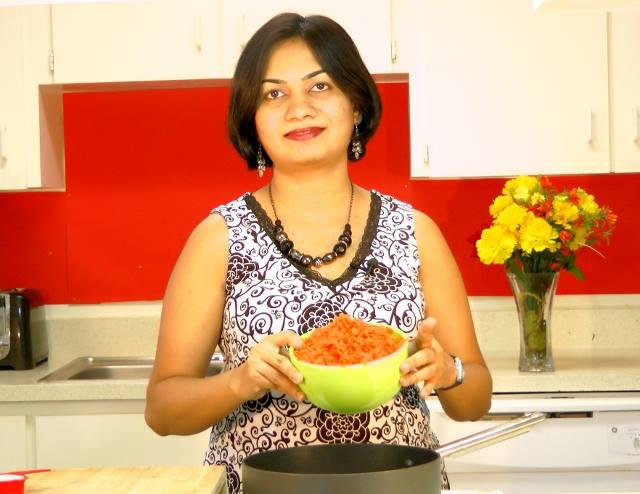 There are three things that any Indian who lands in the US does: 1) Call his/her folks back home in India 2) Exchange Indian Rupee for U.S. dollars 3) Look up madhurasrecipe.com to try out his/her at cooking Indian food. This is no exaggeration. For most Indians who crave homemade food but have never really learned cooking, madhurasrecipes is the ultimate gift, doing all the handholding required to teach delicious recipes.

Madhura Bachal, sole creator of the site, says she herself was clueless about Indian cooking when she moved to the U.S. in 2007 and the website was to help as many Indians to eat healthy, tasty, authentic food as possible.

Born and brought up in Pune, India, she studied accounts and taxation law. After working at one of the top multinational corporations in India, she got married and moved to Chicago in 2007 with her husband Mangesh. After a stint as a banker, she took a break to bring up her daughter in 2008 and has since been a full-time stay-at-home mom—and utter recipe aficionado.

What makes this so notable—beyond the deliciousness of her dishes—is that Madhura's had but seven years of culinary experience. Yet today she is the go-to culinary guru for many Indians in the U.S. Here, she dishes on her tasty journey all the way from India to Chicago.

You have over 100,000 subscribers and 40 million views for your YouTube channel—Madhura’s Recipes—and over 16,000 on your Facebook page. These incredible statistics speak of your huge success. How did you first begin your journey with food? When did you really start investing in cooking?

My cooking journey started only after I got married. Believe me, I had never tried out cooking before I tied the knot. However, I was always observing my mother in the kitchen and this helped me when I actually started cooking. I was completely disappointed with the Indian food in the U.S. and as a foodie, I had no option but to cook after we moved to America in 2007. The journey of madhurasrecipe.com started at the end of 2009 when my husband’s colleagues started asking me for the recipe of special dishes he took to work in his lunchbox. His friends were big fans of my cooking and would continuously prod me to share the recipes. They were the ones who suggested that I start a blog with recipes in it.

But then my husband went a step beyond that and started a website. He did a ton of research online and registered a domain. He worked late night hours to design the entire website all by himself, despite having a full time job. Then he presented madhurasrecipe.com as my birthday gift in January 2010. We didn't even have a good video camera. We completed all our first recipes using normal digital camera. Initially we only had handheld cameras during shoots and later we borrowed my friend’s tripod for trial purposes for a few days. This is how madhurasrecipe.com was born. But we filmed over 100 recipes in next three months.

In India, moms are our first cooking gurus. Tell us a bit about your childhood, your trust with cooking and your mom’s role in your success.

Yes, my mom is my greatest guru. She is a fantastic cook who loves to cook and feed guests. But I was a lazy kid who never bothered to cook much—let alone help her in the kitchen. That said, the cooking tips and tricks that I provide in my cooking shows are definitely passed on to me by my mom. Maybe I got the cooking talent from her genetically.

What made you decide to take your cooking online? What do you think it is about work that draws people to it?

The main reason to go online was the wider audience that I can reach. The Initial goal was to reach all Indian people residing across world and help them with my recipes. Later I discovered that people from all over the world are watching videos and appreciating the work.

Is there a reason you prefer the Internet to magazines and books?

I was just personally keen on posting videos and a website more than a book or magazine. However, I am planning to write recipe book very soon.

What do you think it is about Indian food in the U.S. that makes it not as good as the food back in India?

We tried several Indian restaurants in the U.S. and were not happy with the food. Most Indians, like my husband and me, prefer spicy food with heavy masalas, but it's bland in the U.S.

How much time a week do you spend on your website/channel?

I spend two to three hours every day on the website monitoring responses and also film two to three shoots per week—which takes roughly five to six hours each. I don’t think it’s a full-time job but there are no limits for doing more. My husband takes care of all technical support.

What is a typical day like—especially when you decide to post a recipe that day? What kind of research goes into it? How do you decide when and what to post a particular day?

I plan my recipes during weekdays when my husband is at work, my daughter is at school, and my little one is asleep or busy playing. If it’s a really lengthy recipe then I only plan for the weekends. Definitely there is planning and home work involved. I always prepare a trial recipe before I post my final video. If I feel it's satisfactory and makes me happy, only then do I go ahead for final shoot. Trial shoots help me to provide exact measurement to be used in the final recipe.

I time most of the recipes to time with the festival season. I try to publish recipes on Tuesday and Thursday and avoid weekends, as people have their other plans on weekends.

Are there other avenues you may want to pursue—like doing a TV show or writing a book?

Yes, I am looking forward to trying out TV; I'm waiting for my kids to grow up so that I can plunge into that realm.

Any funny/horror story of a recipe gone wrong that you can share with us?

I was demonstrating a Chivda recipe (a salty recipe using puffed rice) in a microwave. The oil was very hot and when I added tempering, all the masalas got burnt. I quickly removed the glass bowl from microwave and put it under water. Since the bowl was very hot, it cracked into multiple pieces. What a mess it was!

Another time, I made garlic and green chili paste. The moment I opened the lid, I said "oh wow it smells wonderful!" The next moment, I got a serious sneeze and cough. That makes me laugh all the time.