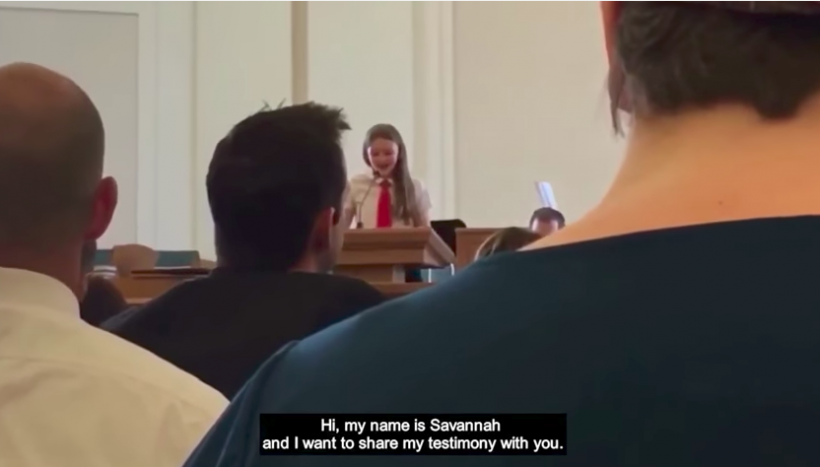 Savannah came out as gay to her Mormon congregation while bearing her testimony. What her bishop did next was absolutely heartbreaking. (Image via YouTube)

Every first Sunday of the month, Mormons fast as a community and take the first hour of Sunday services (which are 3 hours long, much to the surprise of my Christian playmates growing up) to share our testimonies of the gospel from the pulpit. The idea is that you can say whatever you want, but most people know that there is a general script to follow when bearing one’s testimony.

Coming out as gay is not in the script.

Mormonism has an interesting set of mental gymnastics set up to work around homosexuality. It is ok to be gay, just so long as you remain sexually pure — which, in the case of homosexual relationships, typically also includes abstaining from things like kissing and holding hands and just generally being anything beyond a celibate hermit. Straight Mormons can date and awkwardly paw at each other all they want, though.

Queerness is euphemized as “Same Sex Attraction,” or SSA, if you’re hip to the lingo. Homosexuality is treated like an addiction, with twelve step-style meetings and reparative therapy treatments. But still, for PR purposes, gay is ok with Mormons. We love the gays — just not the, like, gay ones, you know? It makes coming out even more of an emotional minefield than it already is, even in the best of circumstances.

When Savannah Ward stood up in her Utah congregation to do just that, her bishop (sort of like the Mormon equivalent of a priest or rabbi) got up and had her sit down.

I am sure this was on the grounds that her testimony (aka: her gayness) was not appropriate for a fast and testimony meeting, which could perhaps have been better served by yet another Wow My Car Started After I Prayed It's A Miracle story to round out their fast and testimony meeting bingo card. Apparently believing that God loves us just as we are was too radical a take on Mormon gospel, which, by the way, founder Joseph Smith summarizes as such:

“The fundamental principles of our religion are the testimony of the Apostles and Prophets, concerning Jesus Christ, that He died, was buried, and rose again the third day, and ascended into heaven; and all other things which pertain to our religion are only appendages to it.”

I guess Savannah’s bishop didn’t get the memo on that part. He seems to place a lot more importance on the gospel of appearances than he does on the gospel of Christ. May the center of his funeral potatoes be forever cold, no matter how many times he tells his wife to put it back in the oven.

In a talk given to Mormon Church officials in 1993, Boyd K Packer warned of three principal dangers to Mormons in the modern world. To quote the man himself, the dangers “come from the gay-lesbian movement, the feminist movement... and the ever-present challenge from the so-called scholars or intellectuals.”

The first time I read that talk, I was 18 years old. I looked at that sentence and all I could think was, “Well shit, I’m damnation trifecta.” It was one of the first times I ever admitted to myself that I was bisexual. I spent many years denying my queerness — even and especially to myself. To be Mormon and a woman felt hard enough to me already — I lacked the required set of genitals to grant me the priesthood, and was therefore pretty much useless to the Church except for supporting and/or creating more humans with the penises that better equipped them to act in the name of God. But to be Mormon, female, and queer? That was too much, even for a dangerous feminist intellectual.

I promised myself that I would attend the Singles Ward (church congregations set up specifically for unwed young Mormon adults to find their spouses) in my city until I found my “eternal companion,” who would obviously have to be male. I figured that since I was bisexual, it wasn’t really that awful if I shut myself off from the possibility of dating women entirely. But I just couldn’t do it.

I felt like a complete fraud, and I found that I could not untangle my queerness from the rest of me. I did not feel whole without it, probably because I wasn't.

I attended every week from June to December of my first year out of high school, and every Sunday felt like its own personal hell. In Mormonism, hell is the word we use for the absence of God. It is not so much a place as it is a state of being. The Sabbath, a day meant to be set aside for sacred ritual and reflection, instead became a 24-hour-long reminder of my failings as a Mormon woman. I hated every minute of it, but I was so scared of what other people would think, and so I kept going.

That summer I started having nightmares about attending church. In one of them, Boyd K Packer was teaching my Sunday School class and he made me carve the name of a Mormon prophet I disliked into my arm with a ruler. “This is the Stick of Joseph,” he’d said, pointing to the ruler. “You need to learn how to use the Stick of Joseph.” In the dream, I remembered the quote of his I’d read just months before. I couldn’t stop thinking of it, even as my dream self dug deeper and deeper into the flesh of my arm. I woke up in a cold sweat, my right arm aching — the Hand of God, ironically enough. I decided that I needed to stop going to church. Boyd K. Packer died not long after that.

I did not mourn him. I have other things to mourn — other lives lost that I feel right down to my bones.

I mourn for all the times bishops and Church officials have asked that someone become less of themselves in order to be more like God — even when their own doctrine states that we are made in God's image. I mourn for the part of Savannah’s testimony that we did not get to hear, and for all the times she will remember the shame and humiliation of having her bishop — the man who was tasked with and failed to honor the sacred responsibility of acting as intermediary between her and God — stop her from sharing her true self with a community of people she thought she could trust.

I mourn the queer kids who were not there with Savannah during that fast and testimony meeting — the ones who leave empty spaces in church pews across Utah each week. Not because they are gay, but because they are dead because they are gay. I mourn because just last year, dozens of LGBT youth killed themselves in the wake of a homophobic church policy released at the tail end of 2015. They were all just as wonderful and important as sweet, brave Savannah looked up on that pulpit. They had amazing lives just waiting to be lived, and they will never get to do that. They will never know the beautiful glimmers of Mormonism that shine through all the hate — they will never sing hymns or celebrate Pioneer Day or learn to quilt or go to the temple ever again. And for that, I mourn every single day.

I picture my young teenage self splayed on my twin bed, tear-filled eyes trying to find God in the plastered ceiling, begging to be straight long before I could even name the feeling, and I mourn for that. I mourn for her, for Savannah, for all the LGBT Mormons who are told we must sever a part of our hearts if we ever want to truly be with our family and our God in the hereafter. You might as well tell us to go straight to hell — at least then you’d be upfront about it.