Choose Your Own Adventure With Netflix: Puss In Boots, Plus Some Fat Phobia 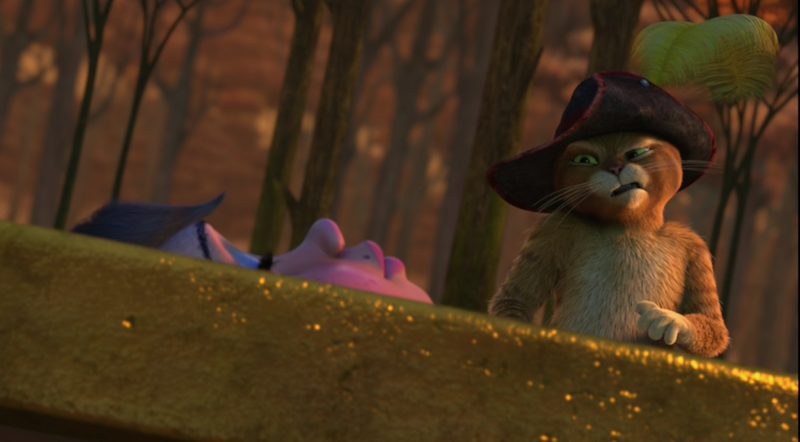 image credit: Netflix, Puss In Boots, Choose Your Own Adventure

I just want to start all articles like this with a collective, DAMNIT. This is why we can’t have nice things. In this case, the nice thing is television that our children can enjoy without being sold some negative body image nonsense. Netflix, come on. Did you not read my Inside Out article?

You have to know I’m coming for you (even if I do get some death threats.) 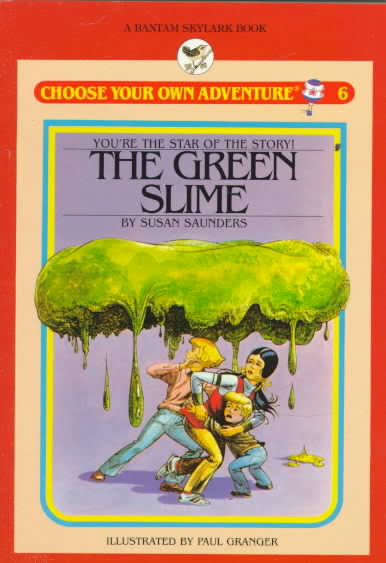 (I guess I was born with the sadism?)

Choose Your Own Adventure, if you weren’t born in the 70s, was a series of books that would allow you to do just that, choose your own adventure. You could essentially direct the story, and you could do it over and over again. Every time you’d choose a new adventure, you’d change the story. Magic.

When someone mentioned to me that Netflix was introducing this as an interactive video feature, I was super stoked. Well, not exactly because TV is not as awesome as books, but you get what I’m saying. A new way for kids to watch TV that isn’t so passive! Yes!

Voiced by Antonio Banderas and about as cute as any orange tabby can be, Puss is really the perfect character to be stuck in a book waiting to be freed by the viewer.

Like any good writer, I was skimming Facebook when I saw a friend discussing it. Based on this discussion, it looked like Puss was pretty problematic. So I went ahead and chose my own adventure because the other thing writers do is research (usually).

It all starts out innocently enough, pretty benign — it is a cartoon, after all. But things take a turn for the shitty right about the time Puss is faced with fighting the evil Queen (who I think is supposed to be Maleficent) or kissing a sleeping woman in a weird casket (why did Disney do that in the first place?)

Maleficent, as it turns out, is a sexy cat. 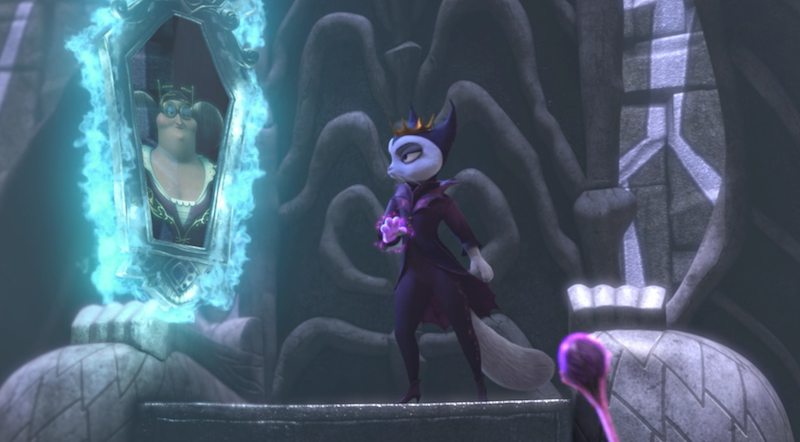 If the viewer chooses the casket lady, Puss protests. He does NOT want to kiss and her and makes that quite clear to the narrator. He finally relents (the adventure has been chosen, after all) with the caveat that he will NOT be marrying her.

As he leans in, this is what we see. 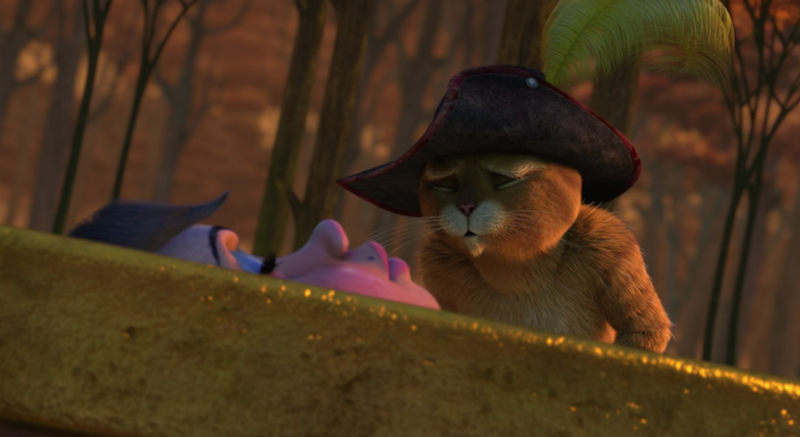 He looks thrilled right? Maybe he doesn’t like kissing? I’ll give him that, he is a cat after all. If I tried to kiss my cat, she’d shred my face. 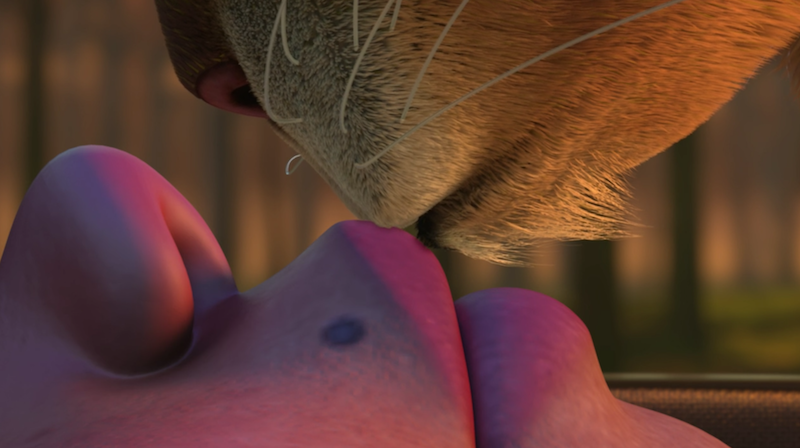 Puss kisses her and, as expected, she pops up, brought to life suddenly, as slumbering Disney princesses are wont to do. 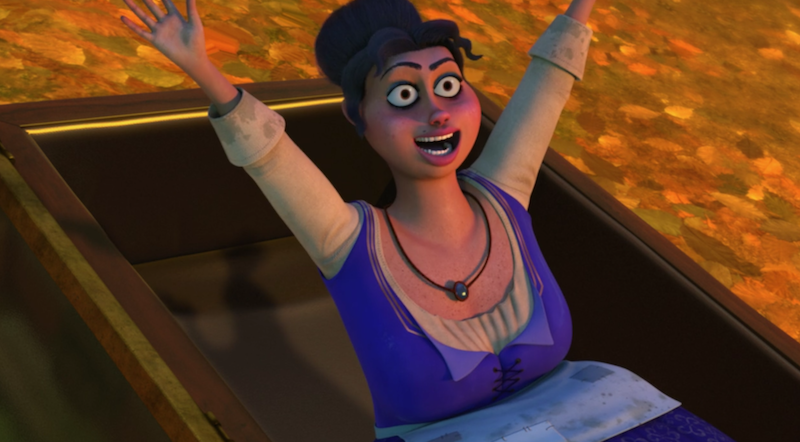 She looks pretty excited about the whole ordeal.

Puss, not so much. 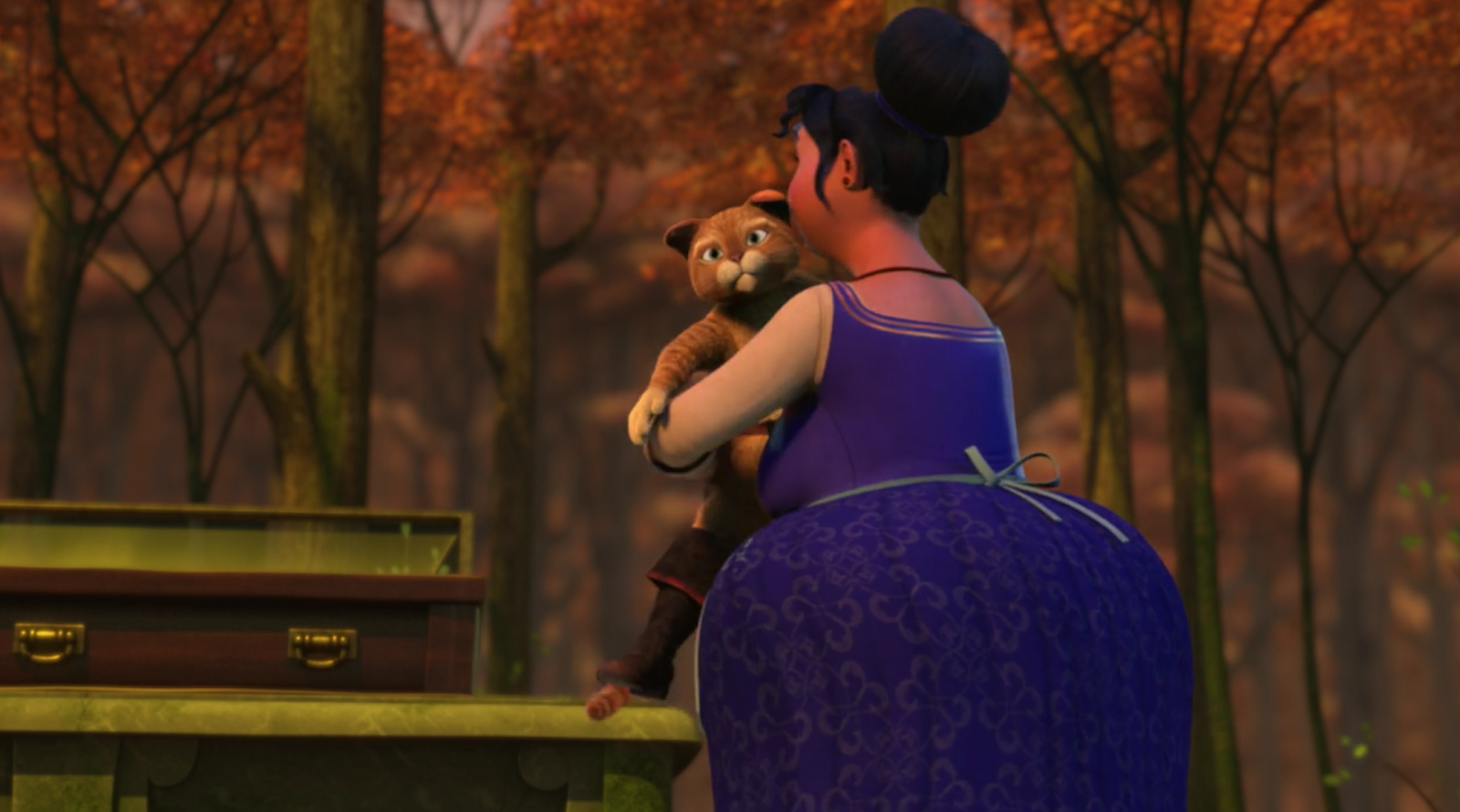 It’s not been made clear up to this point why Puss is so repulsed (though he does say she hates him), but once we see her from the back, we can assume her body isn’t helping matters.

I know you might be thinking, geez Joni. No one said anything about her giant ass. You’re really projecting.

But as I’ve said before, whether or not the words are spoken, the implication persists. She is no Maleficent. Maleficent is EVIL and still gets to be conventionally beautiful — curvy, confident, the fairest of them all, as it were.

As it turns out, Puss DOES end up marrying the hideous princess.

This is how he feels about it. 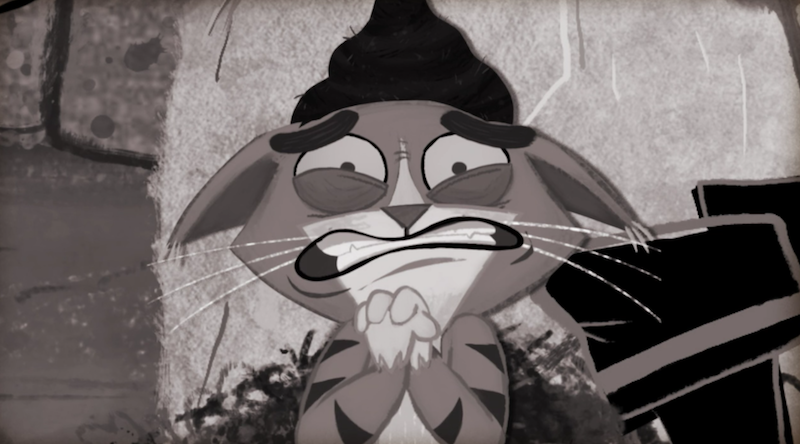 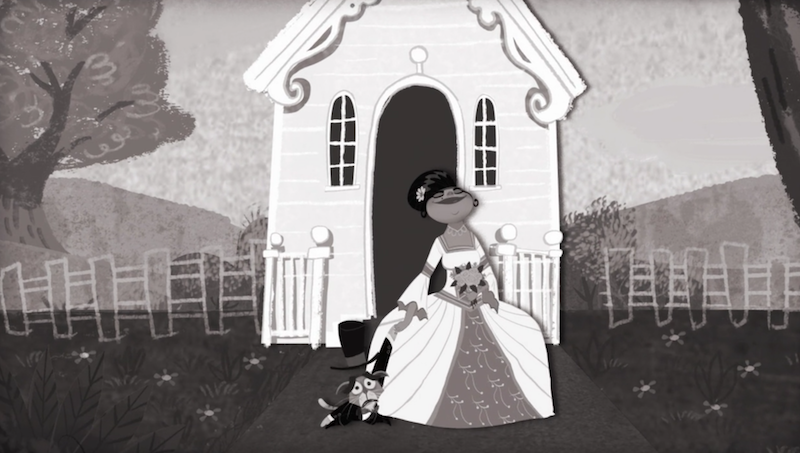 And of course, she drags him down the aisle. Because marriage is awful amirite?

As we’d expect, there is no happily ever after here, at least not for Puss. 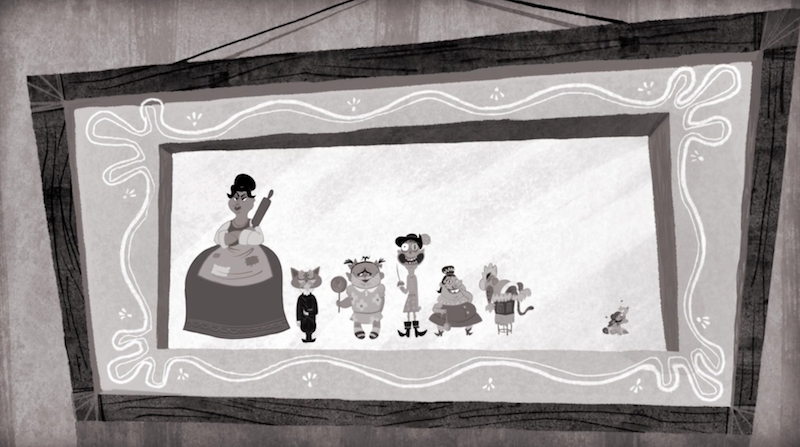 She carries around a rolling pin. Maybe she intends to hit someone over the head? Someone should hit Netflix over the head.

They go on to apparently have a bunch of kids that are all illustrated to look deformed or stereotypically inbred. It’s not exactly clear.

What is clear is that Puss is not happy with this outcome. 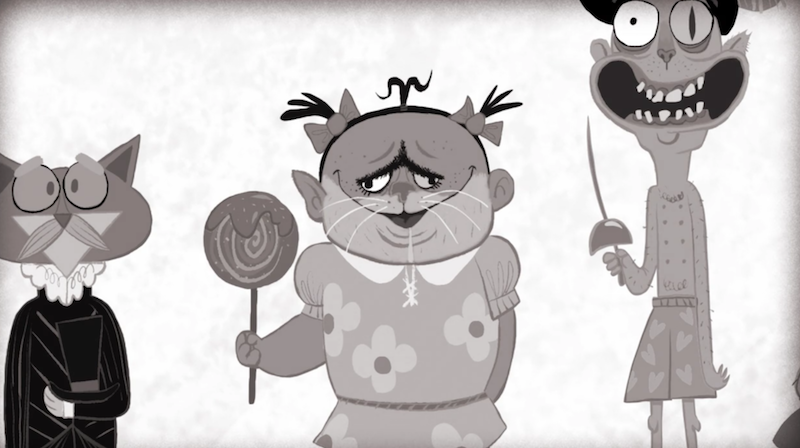 I’m just not even sure what Netflix is trying to do here? 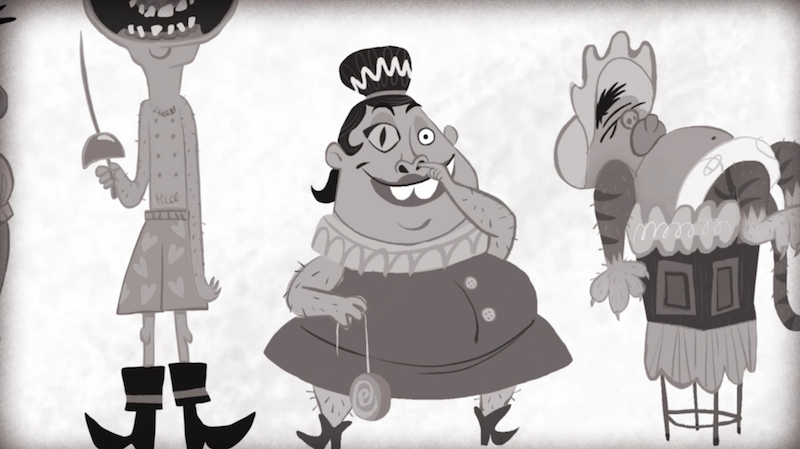 The last baby is covered in flies and wearing a dirty diaper. 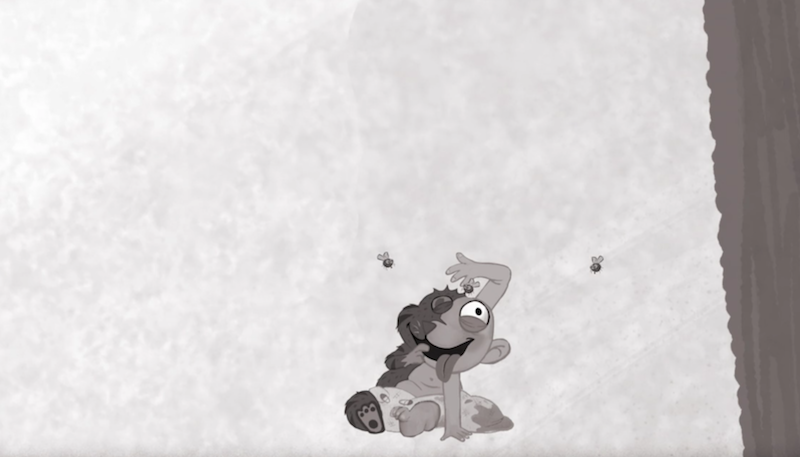 Are they neglectful parents?

How does it all end up? 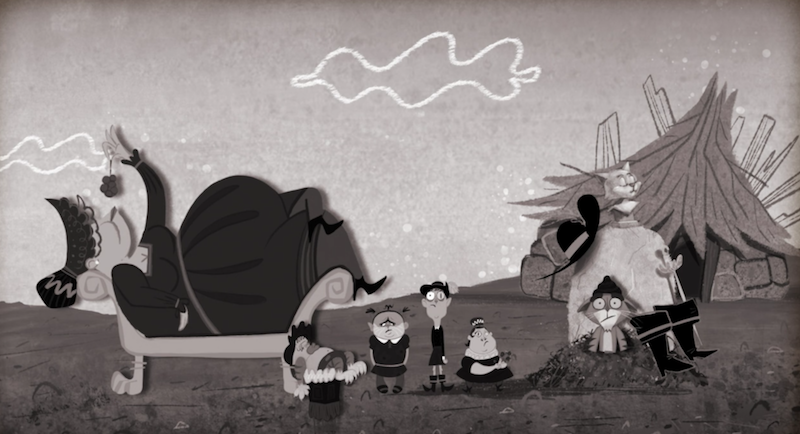 She’s laying on a chaise, eating grapes and being fat (and maybe pregnant, but as we know, you should never assume that.) The kids are being ignored, and Puss looks some combination of terrified/confused/miserable.

I wish I could say I'm surprised by how all of this went down, but sadly, I am not.

Lots of kids watch lots of TV, especially in the summer (genius marketing, Netflix). This new incarnation of Choose Your Own Adventure could have been an ideal opportunity to make the fat girl the love interest — or at the very least not loathsome. Instead, Netflix (or whomever wrote it) did what we’d expect; they made the beautiful cat a vixen and the dowdy lady a punishment. Fat phobia strikes again.

Is the way our kids feel about bodies going to be taught by Netflix? I’d hope not, but this kind of thing isn’t helping reinforce what I’m trying to impart every day: Beauty is last on the list of things a person needs to be.

If you like this article, please share it! Your clicks keep us alive!
Tags
Netflix
Choose Your Own Adventure
Puss In Boots
body image
fat
house beautiful magazine