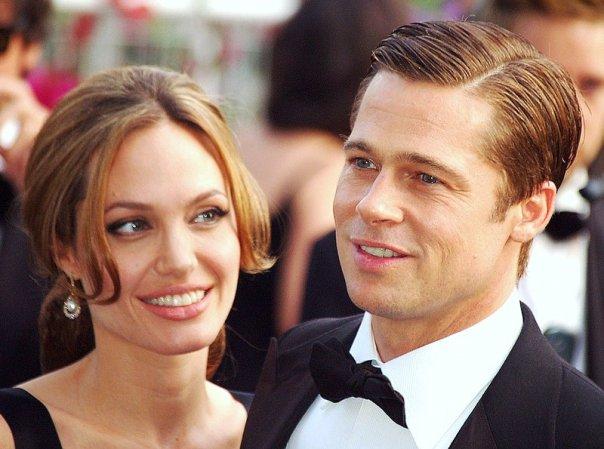 In today's I HAVE LOST ALL FAITH IN LOVE, AND THUS THE UNIVERSE news: Brangelina. Henceforth known by their former incarnations, Brad and Angelina. *sniff sniff*

Henceforth known as yet another Hollywood couple to get a divorce. Twelve years of love, POOF.

Once upon a time, in 1994, Brad Pitt starred in the epic tale of three gorgeous brothers, Legends of the Fall.

Brad played the lovable and equally maddening Tristan Ludlow, and coincidentally there are a LOT of 22-year olds named Tristan right now (the name jumped from position #452 to #121 in a year, weird).

I know Angelina didn't fall in love with Brad until the Mr. & Mrs. Smith days, about a decade later, but the rest of us were smitten well before her.

I guess she didn't hear the collective cries of a million women screaming DIBSSSSSSS.

Angelina beat us all (well, except Jennifer) to it, and with their marriage, Brad and Angie forged what is arguably the most gorgeous union of human beings to have ever graced this planet — or any other. Then they adopted three gorgeous kids and further mingled their genes to make three biological angels. And, it's over. The end.

What I meant to say is, "NO THANKS BRAD. I am madly in love. You had your chance Tristan, and you chose the nomad life."

What I meant to say is he's probably an asshole. What are the chances he is equal parts gorgeous and well-rounded? Small. Very very small. (Angelina, if you're available, well. I'm not saying I'm single, I'm just saying, maybe we could hang out?)

Every Hollywood split-up is another chance for the world to cry in unison, "THERE IS NO HOPE." But let's be real folks, divorce rates are already 40-50% for first marriages, jumping to 60% for second marriages, and if you've been married twice, failed, and are going headlong in for number three, forget that whole "third time's a charm thing." Not in marriage, it is not — 70+% for you folks.

I admire your determination though.

No matter, humans of the world who still believe in love will inevitably be grief-stricken by this news. Except for whomever Brad or Angelina might already be dating, those people not so much.

Brad and Angie join the ranks of other beautiful, and no longer married, Hollywood couples, Tom and Katie (but I mean he's arguably insane, who can blame her?), Marc and Jennifer (that booty tho'), Jen and Ben (say it isn't SOOOO), Nick and Mariah, Courtney and David, Heidi and Seal.

All we have left is Will and Jada, and if they split up, the universe is going to implode.

If you like this article, please share it! Your clicks keep us alive!
Tags
Brad Pitt
Angelina Jolie
marriage
divorce
rates
Hollywood
split