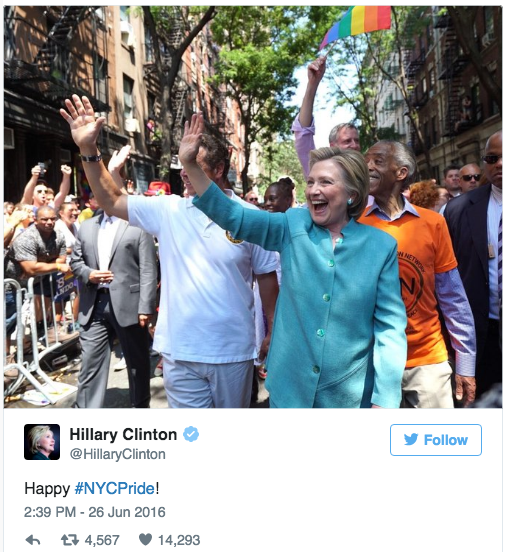 This weekend, presumptive Democratic presidential nominee Hillary Clinton decided to get off the stump and go for a nice walk with several thousands of her best friends. Specifically, LGBTQ friends. More specifically, she hit the streets of NYC to join in the annual Pride parade. She is the first presidential candidate to ever do this.

While she didn’t get all rainbow-ed or glitter-ed out for the event, she did wear a bright turquoise suit and wave happily to the crowds. Later she tweeted Pride greetings to the delight of LGBTQ Twitter.

Of course, this is Hillary, so haters are hatin’ away. Dr. Jill Stein, the Green Party candidate for president tweeted a video of Hillary in 2004, speaking on the Senate floor in opposition to a Constitutional amendment in favor of gay marriage. Stein went on to tweet sardonically about Hillary’s statement that she has evolved on her stance on LGBTQ rights over the years.

You know what? I’m pretty sick of that line of attack. I mean, really, people. The woman changed her mind. Not just changed it, broadened it. THIS IS A GOOD THING.

Let’s put it this way: If Hillary was your uptight conservative aunt who used to calls gays “sickos” over Thanksgiving dinner until her favorite nephew came out and she rethought everything and WHAM! Twelve years later she’s throwing candy off a Pride float, you’d applaud her. Give Hillary the same kind of credit.

Maybe her record on LGBTQ rights isn’t perfect, but she's getting to a good place. And this weekend, that place was NYC, as the first woman candidate of a major party, as the first major party candidate to march in a Pride parade, making just a touch more history.

If you like this article, please share it! Your clicks keep us alive!
Tags
Hillary Clinton
pride
presidential candidate
LGBT
LGBTQ
gay pride