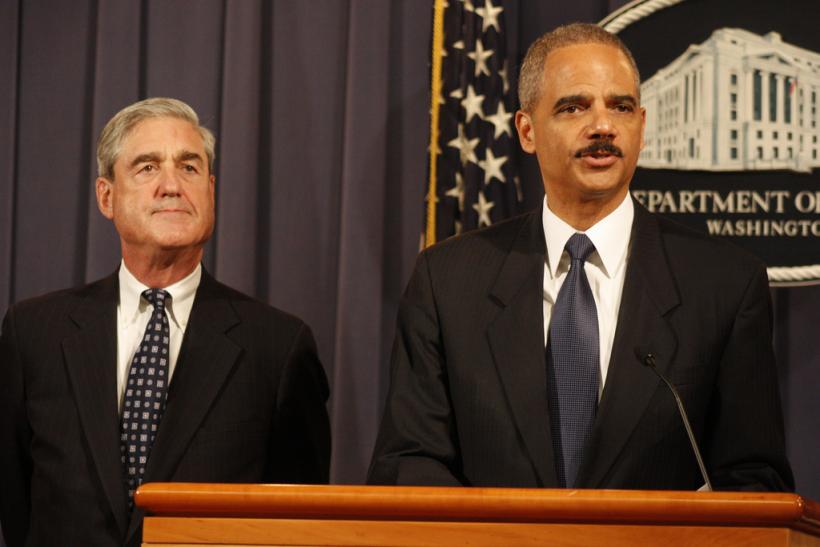 Mueller is a former FBI director, former U.S. prosecutor, and a serious problem for the Trump team.

You know that feeling of slowly clackity-clacking up the first hill of a roller coaster? The slow controlled ascent that you know will end with a stomach-lurching plummet to the bottom, followed by a breakneck ride around more hills and curves and loops?

Yeah, that is what every news cycle feels like to me these days. Everything starts off kind of normal, the news moves at a sedate pace all day (Oh look! Stock market numbers! Something about gas prices! A Karadshian wore an outfit!).

Then at about 5 p.m., some blockbuster release pops out of the New York Times or Washington Post and BAM! We are riding that roller coaster.

Yesterday, the steep dive happened when Deputy Attorney General Rod Rosenstein announced that he had appointed special counsel to take over the investigation of the Trump campaign’s possible illegal contact with the Russians.

This comes in the wake of Trump deciding to fire now-former FBI Director James Comey, whom he had allegedly asked to walk away from the Russia stuff as it pertained to now-former National Security Advisor General Mike Flynn. Comey didn’t, so Trump channeled his Apprentice persona and fired him. Evidently, Trump hoped the investigation would go away when Comey went away.

Wrong again! If anything, this new development gives a different and stronger focus to the existing investigation. According to the orders written by the Deputy AG, he has tasked the special counsel with investigating:

“(i)any links and/or coordination between the Russian government and individuals associated with the campaign of President Donald Trump; and

(ii) any matters that arose or may arise directly from the investigation; and

The counsel is also authorized to prosecute any federal crimes arising from the investigation.

This is a broad mandate, to say the least. If I were associated with the Trump campaign and knew I had operated outside the law in any capacity, I’d be lawyering up right about now.

Now, you’re probably wondering who the hell Rosenstein appointed to do this job. Is it some partisan hack who will just sit in an air-conditioned office and play with a fidget spinner for a few years while pretending to do important investigating? Oh no. No.

This is soooooo good!

The special counsel is former FBI director Robert Mueller. The same FBI director who, under President GW Bush, threatened to quit rather than unconstitutionally wiretap U.S. citizens without a warrant. This is a by the book, law and order kind of guy. And his chief ally within the Department of Justice at that moment? James Comey.

Mueller, in addition to being an FBI director, was a U.S. Attorney and Assistant Attorney General for the Criminal Division going back to the Reagan administration. In those capacities, he investigated and prosecuted such characters as Gambino Family Mafia boss John Gotti, the Lockerbie bombers, and Panamanian dictator Manuel Noriega. And he did all that before being FBI director in the immediate aftermath of 9/11.

Moreover, Mueller is so respected on both sides of the aisle, that when his 10-year term as FBI Director ended, President Obama petitioned Congress for a special extension to keep him on, despite him being appointed by the Bush administration. Congress allowed that with broad support.

The bad news for all of us is that while this investigation may be its own roller coaster ride, we probably won’t be on it. It doesn’t seem like Mueller will be obligated to provide any public briefings or updates on his progress. And he doesn’t have any deadlines, either. This could be a very long, very undramatic wait for any kind of outcome.

In the meantime, we have the president’s Twitter feed to watch. This morning, Trump fired off a couple of doozies, complete with his signature misspellings and unfounded allegations: 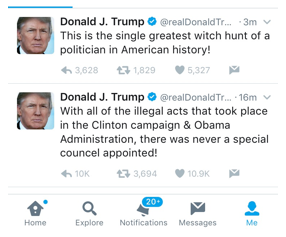 It’s so hard being Donald. ::eyeroll::

No one knows where this is all going, but for the first time in months, I feel like there’s at least one adult in Washington. I wish Mr. Mueller well on this endeavor and I’m grateful he was willing to take it on.

If you like this article, please share it! Your clicks keep us alive!
Tags
Robert Mueller
special counsel
special investigator
Department of Justice
FBI
Trump
Russia