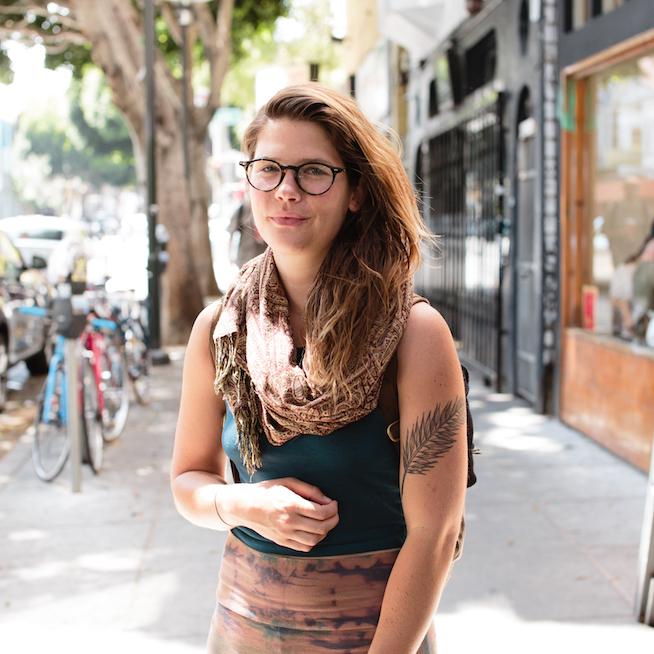 What are you up to today?
I'm about to go to my studio in Oakland — I'm an artist. I was here getting coffee and visiting Adobe Books because I'm doing an event there next weekend. I was checking out the space and sussing out some stuff.

Do you know what you'll be doing or is it more an improvised thing?
This is a funny thing to explain to a total stranger! [laughs] I have this notebook that I've been keeping for five years. I call it my logbook, but it's like a dream journal — of the dreams I have at night, and the dreams from my life. I'm throwing a party for its five-year birthday. I'm going to be doing interactive reading with all the logbooks and then I have a whole bunch of friends who are doing little solo performances.

So it's your day-to-day dream log?
Yeah, I write down every dream that I remember, and then there're also just funny ideas and stuff, too.

Have you run into other dream journalers from talking about your project?
Yeah! I don't actually know anyone who is as dedicated as I am. I do talk to a lot of people who are like, "Oh, yeah! I've done that a little bit and it was really cool!" But I'm committed to it for my entire life!

How did you start journaling?
Right after I graduated from college, I had this notebook and decided to go for it and just found it was a very pleasurable activity. And once I'd been doing it for a while, and could see the patterns developing through my dreams and how they evolved, I got interested in that and decided that it was a worthwhile endeavor. [laughs]

What's one of your favorite insights from doing this?
I had this one dream that became lucid. And I was just talking to a dude in the dream. Not somebody I knew from real life, just a dude. And I started — once I became lucid —I started interrogating him, like, "Who are you? And he told me a bunch of weird shit, but he also told me that his name was Lecha, and in the dream I went and got my logbook to write down his name and other stuff, and that dream ended up influencing an important life decision later. [laughs]

Where are your favorite places to hang out in the area?
I really love El Rio. El Rio is very classic. This coffee shop in my neighborhood called Réveille — it's run by a bunch of really fabulous gay boys. It's my favorite. I'm really loyal to them! [laughs]

Is doing art your main occupation or do you do other things as well?
I help run a cocktail bar half the week. It's in Union Square and it's called Benjamin Cooper. It's another great place to hang out too! I'm like the cocktail waitress/bar mother/creative director. I have a very particular role that could not translate to any other establishment! [laughs]

So you work in a studio in the East Bay — have you been working there for a while?
Yeah. I'm living in the city now, but I used to live in a live/work in a warehouse near Ashby BART. And I moved out of there in December, but I still have my studio in the same spot. So I'm there the other half of the week, pretty much. Yeah, lots of drawings, lots of semi-insightful, semi-sassy text-based stuff. Tropical stuff — I'm obsessed with palm fronds. [shows palm frond tattoo on her upper arm]

Yeah, that's an awesome tattoo — really pretty! Was that inspired by a trip?
I got really obsessed with tropical stuff, probably, like, three years ago, and I draw palm fronds compulsively. If I have a pen and paper and nothing to do, palm fronds just start coming out of fuckin' everywhere! And then I lived in Brazil last fall for three months and that was a very important experience for me, and the palm fronds became extra meaningful — I felt like I really deserved it after that!

Were you doing city living over there?
No, I was living in a place called the Chapada dos Veadeiros. So, like, in the middle of the country. In rural Brazil. It's like the New Age capitol, which I was really excited about! [laughs] It's a really spiritual place for people because there's quartz crystal everywhere and lots of beautiful waterfalls — I recommend it!

How did you end up going there?
A friend of a friend was looking for someone to help out on their land, and it kind of fell into my lap. It was a big Saturn Returns moment where I was like, "I'm gonna quit my job! I'm gonna quit my boyfriend! I'm going to Brazil!" And then whoop, took a leap. It was great! 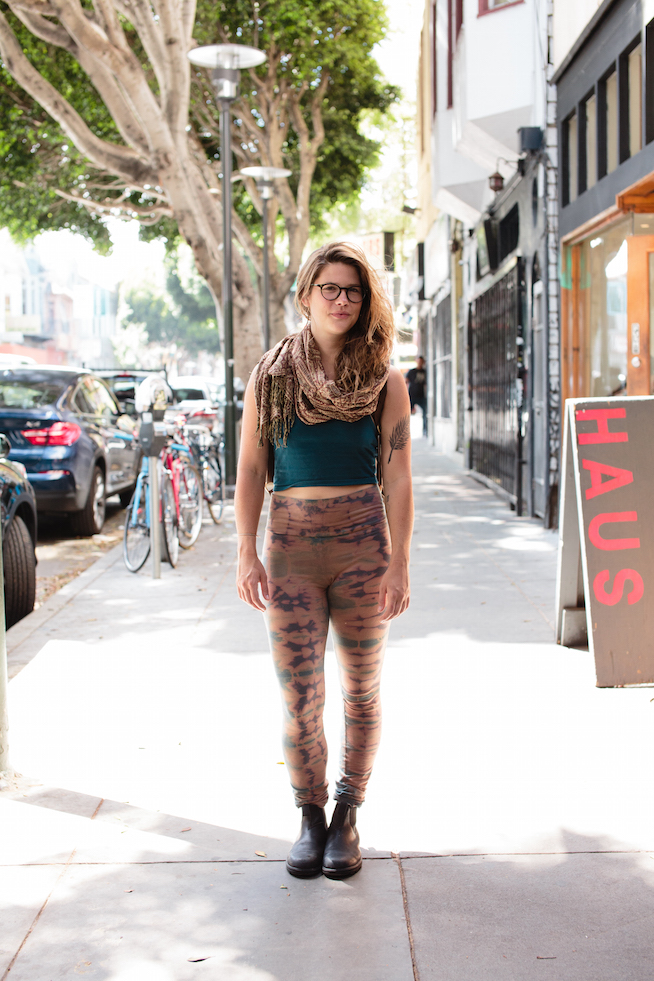 Also I just want to ask about your personal style because I love the colorful pants and tank/scarf combo.
I definitely feel like I'm a chameleon of sorts — but this is like my outfit. I like to wear really comfortable stuff in the studio because I like do a lot of squatting. I made these pants — I bought yoga pants at American Apparel and then just indigo dyed them.

So how did you get all the different shades from the indigo dye?
The pants were gray to begin with, and you just fold it up and dunk it into the indigo vat, and the places where it really absorbs turn different colors.

So that was just one run and it gave you all those colors?
Yeah. Oh, and I just want to talk about my scarf, too! I have other scarves but this is the only one I wear because it was passed down from one amazing witchy woman to another, and then to me, so I feel like it has this really special energy.

If you like this article, please share it! Your clicks keep us alive!
Tags
Fashion
style
street meet
San Francisco
iris alden 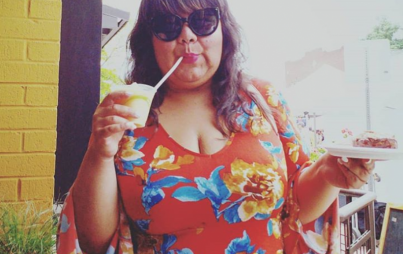