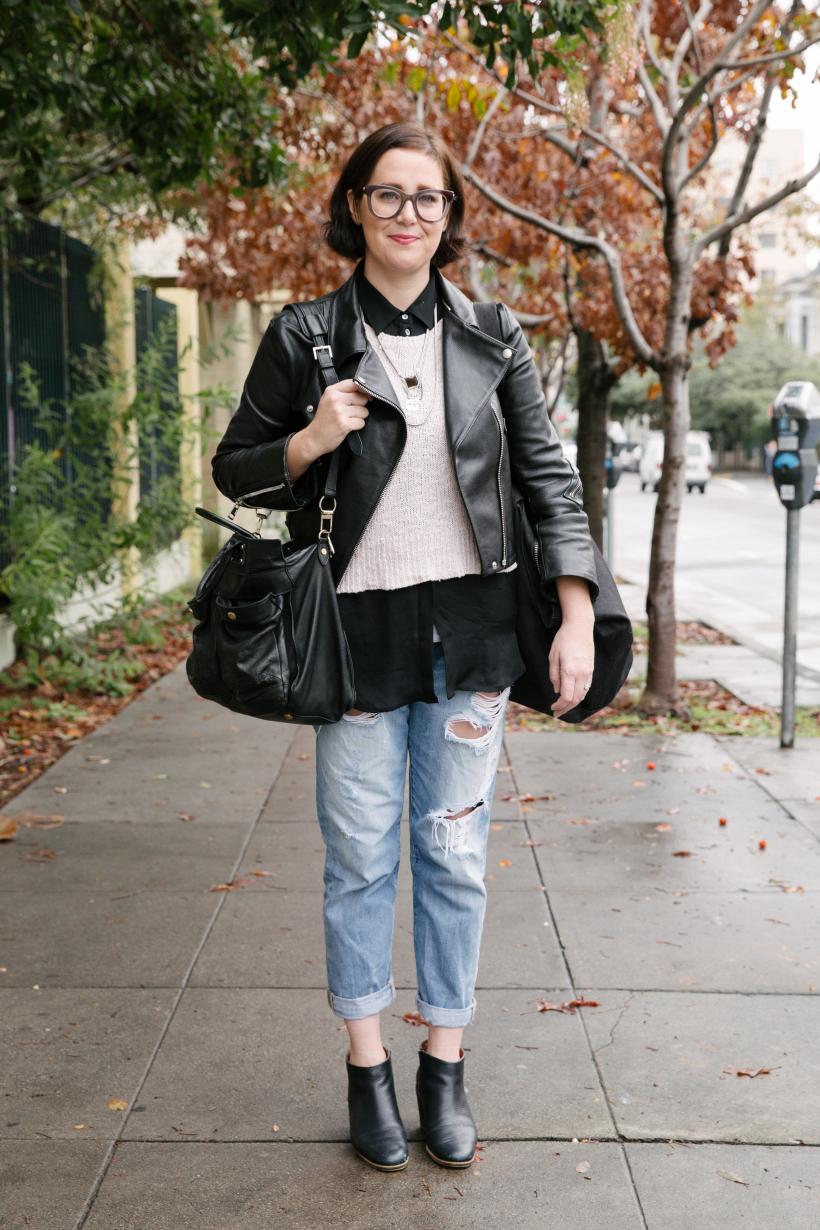 I'm a creative director at an digital design agency.

How long have you been doing that?

How did you start?

I went to art school for graphic design and then I was in a lot of different positions doing various things—always digital design, web design and product design and stuff like that. Then about six years ago, I switched over to more agency work.

I just had a baby so now I'm the first part-time employee ever in the agency's existence. That felt like a win.

Any projects you've worked on work-wise or personally that you're really proud of?

I'm working right now on—can't talk about who it is unfortunately—but I'm working on a really interesting travel website that's going to be launching in the next couple of years. But that's been really fun, just trying to figure out how people like to travel, and the way people browse and what people are looking for—that really sweet spot of utility and inspiration.

What do you like most about what you do?

What's a surprising thing that you've learned on the job?

We re-designed this site for Four Seasons hotel group and it was really interesting to see the behind-the-scenes of how they work. It was so cool. They have these meetings every morning where they talk about who's going to be there and what they like, so you really get to lift the curtain and see behind the veil of how other service industries work.

So what do you do when you're not working?

Now I'm with my baby all the time! [laughs] We travel quite a bit though still, we hike a lot. We moved here from New York two years ago, so we just try to enjoy getting out to Sonoma, and going out to nature and actually having access to that stuff in a way that we didn't have in New York.

Any fun discoveries in that realm?

Yeah! Well we actually started doing a hike every single week so trying to find new places all around. Going to the East Bay, Marin, South Bay—it's just been really interesting to see the different environments all the way around. We got a hiking backpack for the baby and he just chills out back there.

Have you had any interesting developments from being a new mom?

Yeah it's crazy! It is super crazy. I never could have expected how insane it is. It just rocks your world. It totally shakes you to your core, but in a good way. It's like this weird identity shift. And it sounds totally cliché, but you never love anybody like you love your baby. And he's cute [shows me a picture of her baby on her phone—he is, indeed, a ridiculously cute baby]

Oh what a cutie! Oh my goodness.

Have you gotten any good advice recently?

Yeah, I have actually. One of my clients gave me some advice when I went back to work after maternity leave—it was a man, which I thought was very interesting! He's a high-powered CEO and he said, "My wife is going through the same thing. Do less and parse out your duties more. Try to let go a little bit of everything that you're doing and delegate.

What else did he say?

Choose your accounts, the ones you want to succeed at, don't take on too much and don't quit. And I was like, thank you! That's so great! I think he saw it first-hand from his wife. It's a struggle to try to be the same person that you were at work when you have so many different priorities. So that was helpful, and I was really surprised that it came from a dude!

I'm also going ask you about what you're wearing—I love those glasses!

I actually just got them at that optometry shop right there! They're actually sunglasses, but I had them put regular lenses in them. They're Thierry Lasry. The jacket is Acne. I stalked it on Ebay for a really long time. This shirt is just J Crew, and this sweater is from a website called Bona Drag. I think it's named after a Morrissey song or something. The jeans are Gap, these are Rachel Comey shoes, and bag is Rag & Bone.