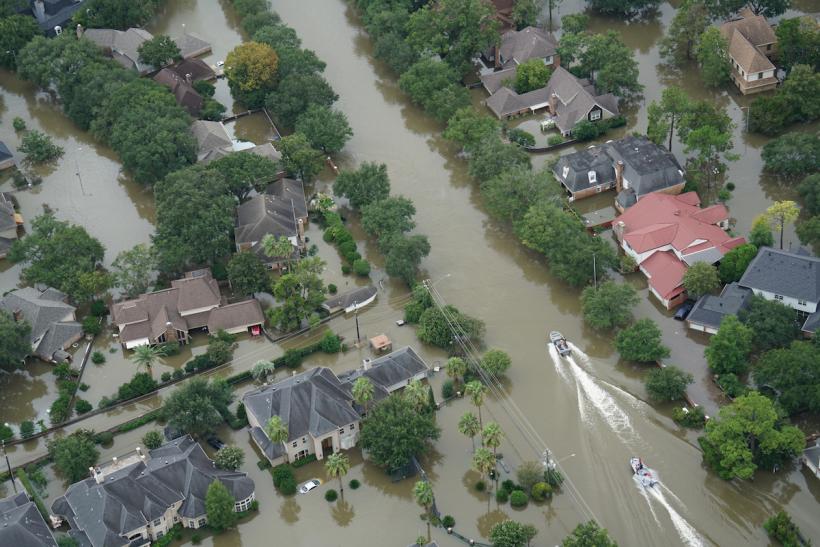 This is a story of surviving natural disasters.

We saw Hurricane Ike coming for days before it made landfall. It was just two short years post-hurricane Katrina, and all of south Texas and Louisiana were still reeling from her trauma. My husband and I began deliberating if we should stay or go. We lived in downtown Houston, a short hour’s drive from where Ike was predicted to make landfall. We had many conversations, all of them ending in uncertainty. We lived close to Buffalo Bayou in a neighborhood that flash flooded regularly during Texas thunderstorms. Our storm drains were inefficient. We lived on the ground floor. Our landlord would not board up our windows, and we did not have the resources to do it ourselves.

My husband and I had been married for just over a year. It was a difficult, painful year. We were struggling to keep it together. And by “it” I mean our collective shit, not just our marriage. Hurricane Ike was just nature’s interpretation of what we were already living.

The day before landfall, we packed up our belongings, a decision to leave finally made. As we gathered up photos, laptops, important documents, and small treasured items in a tension-filled flurry, my husband’s phone rang. It was his best friend’s wife. His best friend had laid down for a nap. He suffered a brain aneurysm and never woke up.

My husband dropped the bag in his hand and screamed until his voice went hoarse.

Then we got in our car and drove north.

During the next 8 days, we sheltered with friends. Friends who loved us and hurt for my husband’s loss, even if they didn’t fully understand exactly what we were experiencing. We slept in guest rooms and air mattresses on living room floors. We barely talked, and my husband cried. I cried right along with him.

When we returned to Houston, downtown was gutted. The streets were littered with reams upon reams of documents released into the 110 mph winds as debris struck skyscrapers’ windows and left our city looking like a war zone. Twisted steel, trees and branches, power lines, and a host of other random objects covered the neighborhood while the sun shone hotly on our heads as we surveyed the damage. Around the corner, an entire block of old-growth oak trees had been uprooted and tossed aside by a hurricane-spawned tornado.

I will say this to you now, it is a miracle that my husband and I survived that storm. It’s been 9 years and we still talk about life "before Ike."

Our apartment had a cracked window. The contents of our refrigerator were rotten and spoiled, the smell so rancid it choked me when I opened the front door to our home.

The beach where we got engaged was washed away by Ike, along with the stretch where I had taught my niece to boogie board just a few weeks earlier. Family beach cottages that weathered nearly a hundred years of hurricanes and tropical storms were wiped out in an instant, the land permanently underwater as Ike erased and redrew the coastline without prejudice.

And my husband’s best friend. Still gone, his body rapidly decomposing in a mortuary that was without power for days, and unable to be seen by friends and family who were robbed of the opportunity to see his face one last time and say a proper goodbye.

I will say this to you now, it is a miracle that my husband and I survived that storm. It’s been 9 years and we still talk about life "before Ike." It is a life that feels as though it barely existed and abruptly ended the moment we walked through the front door of our home 8 days later.

Our friends in South East Texas, Florida, the Caribbean and Virgin Islands, and many other countries have now divided their lives into two categories. Life Before the Storm, and Life After. Life Before already seems like a distant memory, a memory many of them can no longer access through lost heirlooms or old family photos. Life After is a reality those of us who did not live through the storm can never fully grasp, even though we watch and listen with compassionate hearts.

I am tempted to laugh now at the trivialness of my own minor loss during Hurricane Ike in the days and weeks since Harvey and Irma. Except I can’t. Because I know the loss and trauma others are experiencing is more profound than I could ever fathom. That understanding keeps me grounded in empathy and advocacy for those who have lost more than they will ever be able to recover.

Like the ability to listen to the rain without fear of flood waters.

Or to ever appreciate the wind on their face.

Or to see or hear a chopper overhead without envisioning a rooftop rescue.

Or watch their street as it fills with springtime rain showers and not mentally make an evacuation plan.

Or hear a siren without their hearts pounding in their chest, looking instinctively to take cover from the tornado that isn’t there.

Or to take even one single thing for granted. Like the roof over their head. The dry ground their feet tread upon. The hot meal in their bellies. A safe and cozy home where they know nothing will touch them or the ones they love.

Or sleep soundly through the night.

Recovery is a long, arduous process. It will take years to rebuild, if it can even be rebuilt at all.

Survivors will experience PTSD for the foreseeable future. For those of us who watched these catastrophes unfold, we can be open, supportive, offer help, give money, and above all, remember that hundreds of thousands of lives have changed overnight. We can adapt and change with them.