Take The Cake: I Want To See Fat Women In Every Film 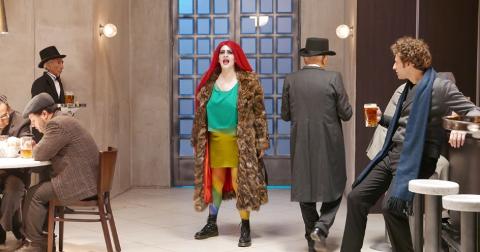 "Seeing big women portrayed as centerpieces in two different films in the same week was something I had never experienced."

This week I was at the Radar Reading Series at the San Francisco Public Library. One of the featured artists was Amaryllis Moleski. She is an Oakland-based visual artist who started her time at the podium with a wondrous closeup gif of her ass getting gold glitter sprinkled on it while she twerked. It was amazing to say the least. One of the reasons I love her work (besides ass gifs) is that she often represents fat women in these resplendent, joyful poses.

She talked about her favorite writer Junot Díaz. And she read a line of his that felt so important I had to share:

Our culture does just this — creates monsters of fat women by denying us any reflection of ourselves.

There are times when I am reluctant to believe that representation is as important as it actually is. Even after all the evidence I’ve seen, all the experiences I’ve had. And it wasn't until last week when I saw two fat women as central characters on screen at the San Francisco Film Festival that I began to realize how desperately I needed them — how desperately I crave reflections of myself and my friends.

The first film I saw was directed by Alejandro Jodorowsky. He has been making weird-ass films for about four decades. If you have never seen The Holy Mountain, I need you to stop reading this right now and go watch it on the YouTubes immediately. His newest film, Endless Poetry, is autobiographical and depicts his life growing up and becoming a poet in Chile.

Normally in an arthouse film like this, the muse would be portrayed by someone waifish and wispy — her slight frame would be a symbol of her otherworldliness and access to unique artistic vision (barf).

There is a scene where he begins looking for a muse. He ends up at a bar and becomes enraptured by Stella Diaz, a large woman with hair that looks like fire. Jodorowsky is tall and skinny with an overbite. His muse is voluptuous, moody, and loud. She has a chubby face, with deep lines around her mouth. Her powerful sexuality is announced when she walks into the bar in a loose silk blouse that accentuates her erect nipples. Once Jodorowsky approaches her, she tells him that they will never have penetrative sex and she also refuses to hold his hand ever, demanding instead to walk around with her hand on his crotch.

She is a symbol of desire and inspiration. Normally in an arthouse film like this, the muse would be portrayed by someone waifish and wispy — her slight frame would be a symbol of her otherworldliness and access to unique artistic vision (barf).

The second film was Patti Cake$. Patti is a plus size rapper babe in New Jersey who’s trying to break into the music business with her band PBNJ (p.s., the “N” stands for Nana, played by Cathy Moriarty). Patti deals with ongoing fatphobia — both overt and microaggressive — but also ends up being an object of desire and romantic interest. There are multiple scenes where Patti is fantasizing about her future baller life and we see her in tight, unapologetic outfits looking like a queen (including one scene where her boss asks her “Where do you see yourself in 5 years?” and there’s a flash forward to her reclining in a tight green satin dress while being fed shrimp).

Having a complex character who is fat is almost unheard of in any medium, and having a fat woman lead is even more difficult to find in cinema. Seeing big women portrayed as centerpieces in two different films in the same week was something I had never experienced. Seeing a character like Stella or Patti is so rare. I was transfixed by both of them.

Stella’s bravado filled my mind with possibilities for my own sexuality and gender expression. Patti’s tender ambitions portrayed a stultifying truth about our culture’s fixation with limiting the lives of fat women through a never-ending barrage of hatred.

I could see the truth in Junot Diaz’ words as I realized the ways these films impacted me. I felt a renewed sense of my own humanity when I saw these women portrayed as larger than life. Because sometimes that’s what we need in order to begin to see what we can become. Film is our culture’s most beloved and revered medium. It is both a reflection of our reality, but also a creator of our reality. When we are denied meaningful representation we are both documenting and perpetuating a grave dehumanization.

I want more fat representation. I fucking need it. Let’s put an end to the creation of monsters and begin a new epoch of fat muses and plus size queens.