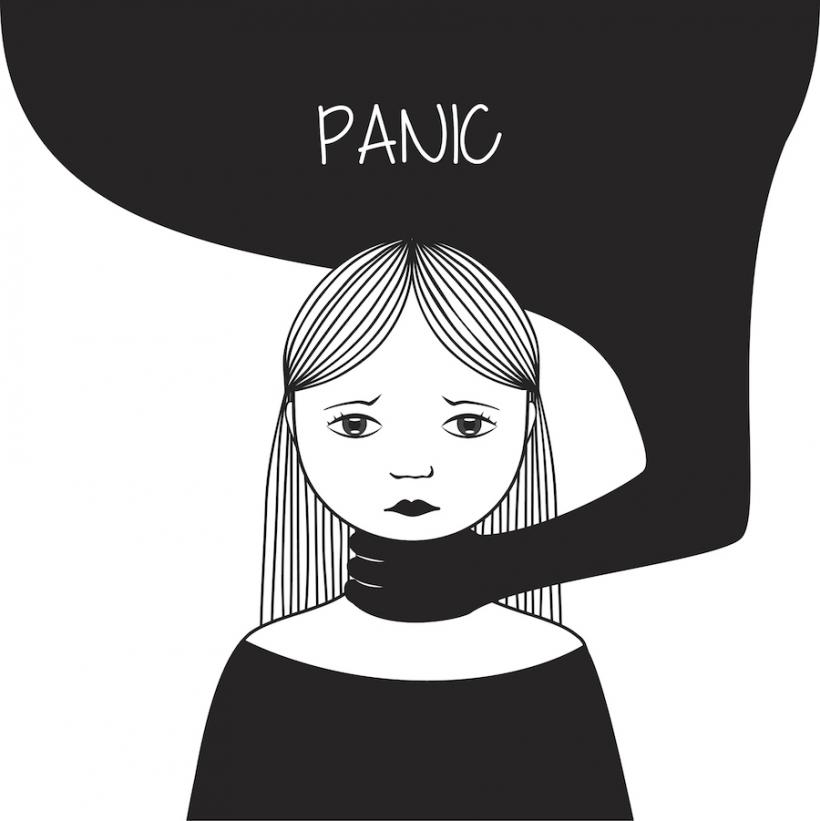 I was halfway through the pilot episode of Ozark when I felt the familiar swell of panic bloom in my chest. It’s not very surprising; Ozark is a stressful show with lots of violence and a family in a pretty much constant state of imminent peril. Plus, crime shows and the like tend to give me panic attacks as it is — I can scarcely watch five minutes of Criminal Minds before being bombarded with spiraling images of myself and my family being slaughtered in front of each other.

I’m guessing that’s why I white knuckled through it without even pausing the episode to take a break.

This might sound ludicrous to the average human, especially if that human has ever had a panic attack — and most have. Most people can tell you of an experience or two when their body felt like it was made out of fear. But for me, a panic attack is as commonplace as a sneeze. There are times when I do have to halt what I’m doing to address them, but almost as often, I feel them coming and roll my eyes at the inconvenience. The Ozark panic attack was one of those kinds — I was irked to have such an unpleasant sensation while I was busy trying to watch Jason Bateman launder a bunch of cash. I could tell it would be a short one, so I just kept on watching.

The panic attack subsided within five minutes and I went about my day as if everything was fine — because it was. When you grow up with panic at your doorstep, you learn to live with it in ways that sound downright macabre to other people. That doesn't mean it's an easy way to live, though — far from it.

I can’t remember the first time I had a panic attack. They’ve always been there, like an allergy or a congenital heart defect. By the time I was in school, I had a list of things that I avoided because of the panic that came with them: men, men with beards, nighttime, mixing foods together, disagreement, and men.

I forget that the rest of the world does not operate in this way, that the vast majority of my fellow humans have never experienced daily, chronic panic attacks. I struggle to distinguish “life with panic disorder” from life, period. For me, such a separation has not and likely never will exist.

The list expanded and contracted as I got older, but it hasn’t ever disappeared entirely. The summer before I started middle school, I had nightly panic attacks so severe that the only thing that could pull me out of them was vomiting. College brought with it an equally debilitating sense of panic — one that I’m still struggling to work through.

Though I have a very different set of triggers now, the panic attacks feel just as scary and all-consuming as they did when I was a kid.

Related: You're Not Lazy, You're Just Terrified — On Paralysis & Perfectionism

The adult perspective I’ve gained is not readily accessible when I’m hyperventilating and sobbing and spiraling down an existential drain with no end in sight.

I regularly struggle to leave the house. For a long time, I couldn’t set foot in a Walmart without a prickling heat moving up and down my back, a signal that panic was waiting for me as soon as I felt safe enough to fall apart. When the inner corner of my left eye feels like someone is pressing their thumb against it from inside my brain, I drop everything and hop in the shower. A migraine like that is almost always just the messenger for a severe panic attack, and water is my most effective coping mechanism.

I do these things with a mechanic sort of regularity, so mundane and commonplace that when people ask me for mental health advice, I struggle to pinpoint the parts of my life that are intentional coping mechanisms. I forget that the rest of the world does not operate in this way, that the vast majority of my fellow humans have never experienced daily, chronic panic attacks. I struggle to distinguish “life with panic disorder” from life, period. For me, such a separation has not and likely never will exist.

For a long time, I kept a mental list of things that I’d do once I was “better.” I yearned for a sound mind and a thin body — two things I was not born with but figured I could somehow earn. Once I had those two things, I could do anything I wanted. I could have a partner, travel outside of the country, hike the John Muir trail, read Infinite Jest, write a novel of my own. All I had to do was be slim and sane, and then my life would begin. Everything else was just prologue.

The truth is that there’s not a breath you take in this world that is prologue.

And your first breath? Chances are, it was a scream. A horrifying, desperate gasp and screech. And someone in the room — your mother, the doula, the midwife, the doctor, the nurse who held your head when you were halfway between this world and the next — smiled to hear it. They loved your scream because it meant you were here.

A panic attack feels like a full body scream. It careens through you, leaves your body filled with shakes and moans. A panic attack is messy and ugly and loud — even the ones you endure silently.

To have a panic attack is to be painfully, intensely alive.

There’s nothing romantic about them, but I take comfort in thinking of panic attacks as evidence that, contrary to the years I spent telling myself I wasn’t yet living a “real” life, I possess a will to live so strong that it sometimes shakes me to my bones. I want to live so badly that I’m terrified to do it. But I go ahead and keep on living anyway, screams and all.

Your Panic Attack Doesn't Care If You're Happy

The Invisible Life Of Having High-Functioning Anxiety