Her Wedding Dress, Not Yours! (Don't be a Judgy Bee-yotch) 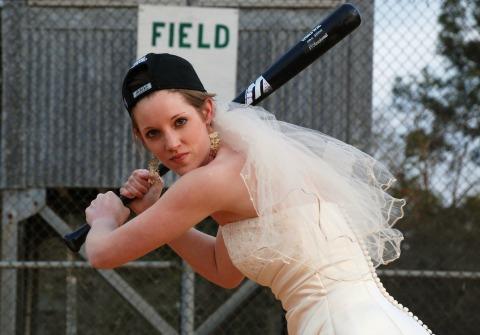 Question: Is it ever okay to judge another woman’s wedding dress?

Yeah we all have our traditions (my mother wore a long black veil, a red dress, a blue sash, Doc Martens, etc. etc. etc.) but a wedding is a highly personalized event. (Duh.) It’s one thing to sit at home and laugh over crazy creations you see online, but making judgy comments about a girlfriend’s choice is just uncool. Hell, even writing mean commentary about strangers online is wrong!

First of all, white. isn’t. necessary. And I'm not even talking about eggshell and ivory here—I’m talking pink, like Big Bang Theory actress Kaley Cuoco’s stunner. Media outlets were fixated on her choice of color. Up until the Victorian era, however, brides chose whatever colors they pleased. Social rule of thumb was basically this: show off how much money you have.

Not much has changed.

Nowadays, brides are getting flack for, errrr, revealing dresses. Anyone who has ever sat down and binge watched TLC’s Say Yes to the Dress (pshh, not that we have) is probably familiar with designer Pnina Tornai’s daring designs. These dresses have attracted immense backlash from outraged fans who are just “sickened” by them. I mean good grief, it's like they're pretending we're all still virgins or something as we traipse down the aisle.

I mean, the ratio of fabric to price tag is shocking—but again do sleeves really counter that sticker-stock?! And really, why care (unless you're on a whole capitalistic bent but that's a whole other can of worms.) A quick looksie on the ol’ internet reveals countless sites designed to slut-shame women who opted to show some skin on their wedding day. Sure, a plunging neckline isn’t everyone’s cup of tea, but neither is taffeta and people don’t seem to whine about that.

Tradition aside, we’ve already discussed the public’s fascination with tearing down beautiful people. Can the same logic be applied to a bride? Is there some inherent jealousy that makes women want to look at the bride and nitpick her gown?

A bridal dress isn’t (usually) an impulse buy; much thought is put into the dress, price, veil, shoes etc. Clearly, every item a woman has chosen is all part of her vision of how she wants to look on her wedding day. As one xojane contributor put it, her wedding dress choice was "emotionally compromisingly important."

Now, would you want to hurt ANY woman on that level? Come on, don't be that b*tch.