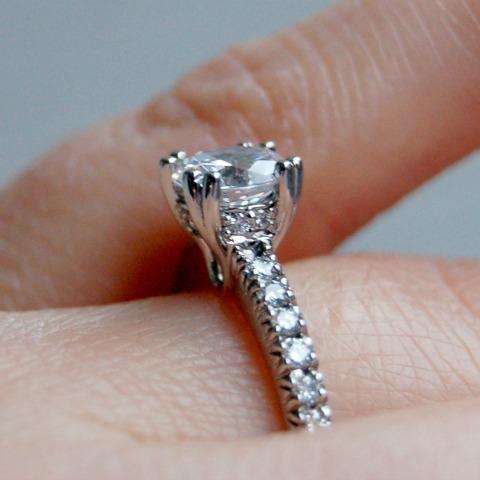 Okay, maybe we have a bit of a beef with the diamond industry. No, no, no, De Beers, it's totally fine that you manipulated us through stellar marketing tactics. We'll keep buying your stuff regardless! Since we're all fools to the same ploy, we ought to band together (pun intended!) and support the beauty of each and every engagement ring—even if it's "not my style." The Judge Judys of the world simply can't resist:

I’ve been engaged for three months and quickly learned that everyone and their mama has an opinion and none of them matter. I’ve judged, I’ve been judged and the entire ring obsession is ludicrous. Why is it such a big deal? Does a gorgeous ring somehow equate to landing a good "catch?" Does it represent your partner’s success, prowess and financial stability? Your ring doesn’t exemplify your partner’s worthiness or how deep his or her love flows, nor does it guarantee a happily ever after. —Aja Magnum, xojane.com

We're 100% behind Aja here. A ring is extremely personal—not just because of what it symbolizes (which is some heady shit unto itself) but because it will (theoretically) sit on a woman's hand for the rest of her life. Similar to tattoos, engagement ring trends and tastes have evolved over time and continue to do so; they're a full-on thing that offers a cross-section of socio-cultural norms from a woman's personality to the region she hails from. Every cut gives the diamond a completely different look like the radiant cut which gives off some serious sparkle or the emerald cut is less glitzy, but highlights the size of the stone.

Folks out in Washington D.C.—surprise surprise!—are wild about conservative, yet classic styles while Los Angelenos on the other hand dig the mega rocks and studded bands.

Also (duh!) there are budget concerns. Though there are loopholes for finding cheaper rings, the general rule is that the most popular cut (which is round currently) will also be the most expensive.

Realistically, you could probably tell a lot about a woman if you studied her engagement ring. But you know what? That's incredibly personal and we're to tell you there's no need to share your observations 'cause it ain't your business.

Still not convinced? Here are the Top 15 reasons to end this madness.
Don't judge a women's engagement ring because . . .

1. Don't you want to be invited to the wedding? I sure as hell wouldn't invite you if you mocked my ring.

2. Her husband-to-be probably picked it out.

5. All diamonds are pretty.They even cast prisms. Come on!

6. A firm punch to the face would hurt more with a ring attached to it.

7. She's probably only going to have it for a few years anyway.

8. The diamond industry wants you to buy bigger ones. Don't play their EVIL mind games.

11. If it mysteriously disappears, chances are you'll be blamed.

12. Some people don't even have fingers (or hands. Or arms.) Don't you feel bad?

13. On some level, you're probably just jealous.

14. If you're going to judge a ring on anything, how about how many people died in a civil war for it?

That is all. Play nice, girls.

Image: Now then, how would you describe this ring? Image courtesy of Flickr