The Cinderella Complex: Why You Should Boycott Fox's Prince Harry Dating Show 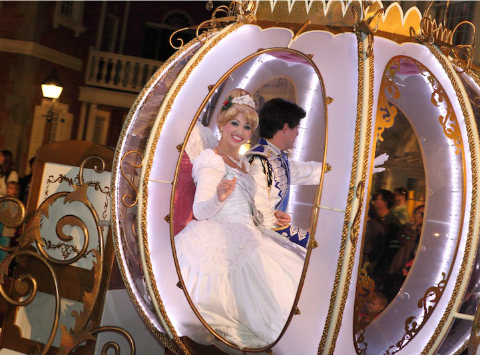 At some point in your life, you've totally fantasized about marrying a prince. Luckily for us Yankees, the land of tea across the proverbial pond has provided two young eligible bachelors for the sake of our fantasies. Yes, Princes William and Harry were crushable from the get go. Outside of a few (actually, minor) Harry dramas (like the whole dressing-as-a-Nazi-thing) these fine fellows stay classy and Brit-tastically yummy.

The world of singletons shed a tear (or ten thousand) when Prince William wed the—yeah, yeah—beautiful Kate Middleton. Worst of all, this neo Princess Di-Audrey Hepburn combo is completely un-hate-able! Instead of plotting an epic breakup, the singletons clung together and feasted their eyes on the rakishly handsome Harry. After all, who doesn't like a little ginger in her tea?

Apparently, the cruel producers at Fox agreed. And thus an American "reality" TV show called I Wanna Marry Harry was born. Yes, a group of luscious ladies have flocked to a mansion owned by a production studio in hopes of winning Prince Harry's heart! Because, you know, the drama on last season's Bachelor just wasn't juicy enough. While we'll admit the contestants are aesthetically appealing, their commentary renders them damn ugly to anyone who hasn't melted their brains on a cocktail of prescription drugs.

I wish that were the worst part. It's not. The prize of the show is based on lies. It isn't even really Prince Harry—it's a lookalike! Remember the part about the women not sounding terribly smart . . . ? Yup. Contestants are not explicitly told that they're meeting Prince Harry, but the show carefully cons them into thinking the look alike—Matthew!—is the real thing.

Naturally, they claim that the real agenda is to have the women fall for Matthew Harry as he is and not who he pretends to be.

In short? Fuck you Fox. Sorry I'm not sorry.

This isn't about love. When has it ever been? The producers are exploiting vulnerable women's fantasies for the sake of the viewer's ego. And as for the audience? We l-o-v-e us some beautiful people humiliating themselves—because, you know, it's totally justifiable to hate someone born with a certain set of genes—and the media is more than happy too oblige the bloodbath.

Even worse (sorry folks) is that the personality type of the cast has been heavily documented. The Cinderella Complex, coined by New York therapist Colette Dowling, may offer some explanations as to why these women (and our fair gender in general) may exhibit the Prince Charming ehmigawd sweep me off my feet desire.

Dowling's theory highlights the notion of dependency embedded in female culture. Even if you're a die-hard feminist, chances are you grew up watching Disney movies or similarly saccharine cartoons. Each plot is similar: woman is unhappy in her life for some reason, until a man saves her. And it's not just ol' racist Walt Disney's fault either: as viewers, we created a need to see these stories enacted. And this desire runs deep.

Happily—I guess?—it's not just some wicked Western society issue either. Cross culturally, various Cinderella type stories have cropped up time after time. My parents, actually, used to collect these stories for my younger sister and myself. All were fairly similar: the protagonist female was overlooked by her peers, but a man swooped in, saw her beauty and took her off to happy land of marital bliss. In the Native American tale, for instance, the Rough Faced Girl (the Cinderella of the story) was covered in scars but proved her inner beauty to the great Invisible Being (the Prince Charming of the tribe). After he decided to marry her, the Rough Faced Girl bathed in a magic pond to rid herself of the scars. And then she was beautiful and married. The end.

Now, I'm not blaming these stories for creating this fantasy in women, rather Dowling details the societally-induced need for women to have a life-partner to save us. She points out that, until recently, history didn't consider women citizens. It wasn't "cool," "sexy" or "chic" to have a man in your life—it was necessary for survival. And while we've conquered many-a-misogynistic issue in today's society, the gender gap continues to plague us.

Not surprisingly, these socio-cultural nuances do a number on our self esteem and worth. Dowling believes these complex feelings create a deep fear in which we desperately seek a partner to save us from these nasty feelings of inadequacy. Whether it's normal body insecurities or a broken childhood, we need to believe that a future partner will pop into our lives and make everything we've ever hated about ourselves disappear.

Why wouldn't we want to marry a prince? He has money, prestige and, well, there's no doubts about his past—it's in every history book. Preying off these archetypal fears in women for the sake of entertainment is malicious and cheap. Not every female is necessarily endowed with Dowling's Cinderella Complex, but enough of us are that the mere premise of this show is offensive. The ladies who desperately prince-hunt—metaphorically of course—are in turn more likely to suffer from a bevy of issues.

Disney likes to keep a bit hush hush on the actual numbers (I may or may not have called them . . .) but couples tend to flock to the land of nostalgic fantasies closer to the holidays when the decorations are extra blissful. Extra not-of-this-world. It's an escape. Love, the fantasy, the marital happiness—it's all a way to let go of the overwhelming internal ickiness.

Shame on you, Fox, for taking advantage of such people and exploiting their misery. There's a special place that Dante created just for you...

Image: At some point in your life, you wanted this. Courtesy of Sam Howzit, Flickr