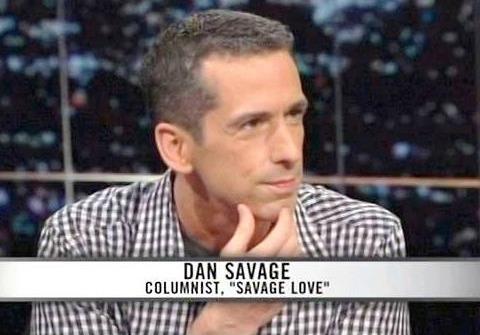 There's something oddly satisfying about playing devil's advocate. I mean, contemplating the merits of seemingly daft, misplaced, ignorant, cretinous argument helps our little bud of intelligence blossom into a bountiful flower of wisdom. I wanted, so desperately, to agree with some outbursts of the ultra sexually conservative because while I write about stuff like this, it's important to me that I'm not operating in a vacuum of my beliefs and agenda.

My wisdom flower will bloom, damnit!

Noted sex columnist, Dan Savage, offered up his own side to the pre-marital sex story yesterday when he tweeted a picture of a Duggar daughter, Jill (of 19 Kids and Counting religious-centric reality TV show family fame) and her fiance, Derick, on the cover of People magazine. People's caption? "Their Extreme Courtship Rules." Obviously Savage had to provide his own commentary on the matter.

Not surprisingly, the social stratosphere wasn't too keen on hearing his left-ist opinion on the topic. In fact, Twitter lashed back at Savage's supposed hypocrisy: apparently as a sex writer, he's supposed to smile benevolently on all things below-the-belt:

@fakedansavage You sir, are a grade A piece of shit. Sleep well with that cock in your ass.

@fakedansavage At least she's not just an angry, untalented faggot.

@nashvltravelguy @fakedansavage Hey Dan, what're your feelings on "tolerance"? Pretty sure this asshole is making shit up.

There's nothing wrong with waiting until marriage to have sex—everyone is different, and we don't judge. The anger at Savage's comment is pretty ridiculous though. a) because he's openly very liberal and would obviously encourage people to have sex before they got married—is his jab at the Duggers really that shocking? No. He disagrees with their decision, which is very different than not tolerating it.

b) what the hell does all this have to do with his "It Gets Better" campaign? Twitchy.com—yup, a conservative site dedicated to Twitter gossip—finds Savage to be "creepy vicious" and is generally appalled to see these kinds of comments from someone who is supposedly passionate about gay rights.

Let's back up a bit. I think we can all agree there's a world of difference between shaming a gay kid (or a teen who's "different") to the point of suicide and making an offhand joke about a proudly anti-premarital sex couple who have chosen to step into the spotlight on the cover of People magazine.  Jill and Derick not only haven't done the nasty yet, but they haven't even kissed! It can't be easy to resist the—arguably healthy—urges (not to mention the whole compatibility thing) for this duo, who are still in their early 20s. But they've staunchly stood by their religion and all the rules that go with it—shouldn't loyal fans stand up and say, "darn right #FuckFirst isn't part of their courtship rules! You go, Duggars!" in support instead? Why all the ultra defensiveness?

(Here's another odd piece to the puzzle to consider: the Duggars are also more-than-openly associated with religious groups saturated in not-so-thinly veiled misogyny. One particular organization, Institute in Basic Life Principles, openly preaches the value of wives staying pretty, fit, meek and ever-subservient to her husband's sexual needs. Blerg.)

Savage wasn't cruel in his remark—crass, yes, but not mean or intolerant. And even if he were more offensive in his "attacks" on no pre-marital sex, we're gonna go ahead and say it's A-okay to challenge opinions closely tied to anti-progressive measures. Perhaps a conversation could have opened up about the feminist power of abstinence...or why feminists are so staunchly against it!

How are we supposed to get along when teachable moments of tolerance—like this one—are kiboshed before a real dialogue can even begin?