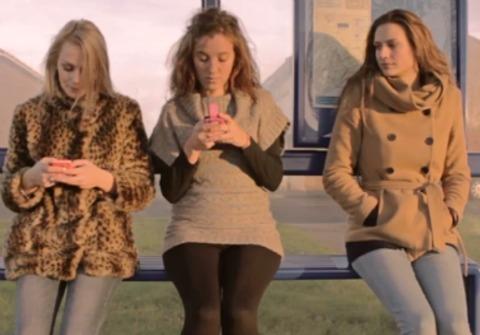 By now you've probably seen that touching—but also creepingly true—viral video "Look Up," urging you to put down your smartphone and live your life sans screen. A rather jaunty Englishmen punctuates the moving poetry and points out how all-too-eeriely-easy is it miss out on the real-time, tete-a-tete connections in the world when fixated on social media, zombies vs. plants and every other seemingly blissful, "we're all so connected!" apps.

Obviously, it's not the first time this subject has been broached. In fact, Aldous Huxley imagined such a demise in Brave New World, envisioning a society imprisoned, crippled and utterly distracted more than 90 years ago.  Of course the question lingers on: is it too late to change our ways?

In his essay, Huxley defined "pleasure" as any type of enjoyment. He cautioned:

Of all the various poisons which modern civilization, by a process of auto-intoxication, brews quietly within its own bowels, few are more deadly . . . than that curious and appalling thing that is technically known as pleasure.

If you remember Brave New World (or not—we won't tell your 12th grade Lit teacher), you'll know there's a lot of that systematic intoxication going on. From the hallucinogenic soma pills to the rampant "orgy-porgy" parties (yup, it's exactly what it sounds like), members of this doomed society were too focused on the pleasures of life to ever take notice—or protest—the offensive, corrupt and otherwise unappealing aspects of reality.

So is it too late for our modern Huxley-esque dystopian society? As an eternal optimist, I say no. Not only does this down-with-the-man video exist, but it's alreasy gone massively viral. Perhaps "social" media will become a mere blip in our bizarre cultural history. Here's hopin'.