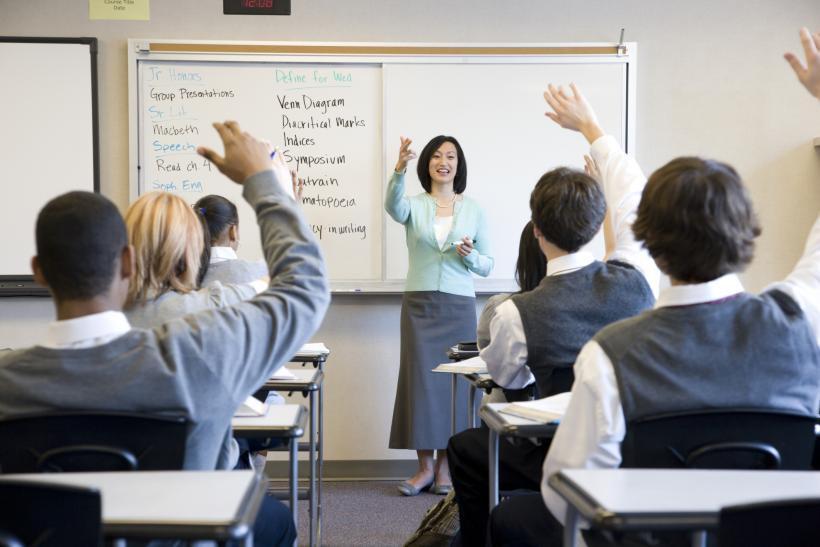 Pop quiz, kids! Who should you seek out for dating advice? Choose one:

If you are 45-year-old substitute teacher named Cassandre Fiering, you better circle that "C". Yup, this New York-based sub was fired after lamenting her love woes to a class one day. Although the incident happened last year, Fiering is feverishly working now to combat the ruling. Parents are outraged, the school is furious. What exactly is the issue here?

Fiering shamelessly admitted that the kiddos roleplayed conversations with her—she would play one of the two men she was seeing, and they'd play her. Supposedly, she kept it "abstract" and "G-rated." Not to leave the students out of the loop (social experiment?) Fiering explained that the men were in their 30s and she just—mercy oh my—couldn't decide which one she liked more!

Spoiler alert: Fiering wanted to highlight just how mean one of the men was. Surprise, surprise.

The scene quickly turned into a pity party and the kids were wrought with horror—how could a guy treat their dear sub so cruelly?! According to Fiering, the sweet schoolkids were delighted to help suss her situation out. (Sadly one report also states that Fiering touched the kids—a claim which Fiering fiercely denies.)

We're not sure about the latter of the claims, but one thing is certain: Fiering needed people to feel sorry for her so she sought out the epitome of malleable minds to victimize herself. What does this say about an adult woman?

4th graders are what, like 8? 9? Fiering clearly wasn't on the prowl for advice, she was keen on getting sympathy. (Because what eases a love-scorned heart than 15 palm-sticky hugs from elementary school students.) While children will believe almost anything, they're also pretty damn smart and more-than-aware that adults reside in a different social caste. It wouldn't take a prodigy to realize that this isn't normal behavior from a grown up.

If the "touching" claims are false, we don't find Fiering's behavior creepy or damaging or dangerous, just pathetic. Get this bitch on a chaise lounge to talk about her issues pronto before any more boundaries are blurred.

Image: Alright class, raise your hand if you know whose job it is to supply the condom! Courtesy of, ThinkStock