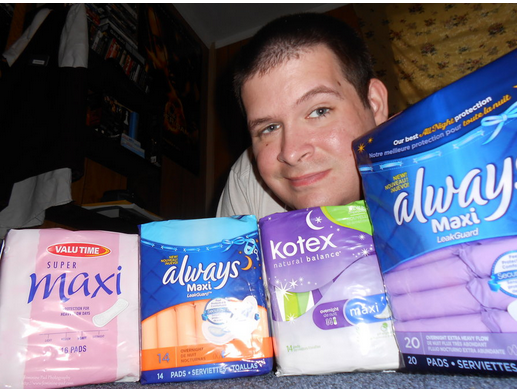 A century ago in internet time (so, just over a year) the web pages were agog with curiosity over a man (or, an "it") called Pad Gardner. Why? He expressed, ahem, quite an interest in being a woman's maxi pad. Specifically, he wants to be "pressed against a soft vulva for a woman's period." (Who doesn't.)

Initially, Gardner's less-than-common desires made us all want to run for the hills and hide our menstruating vulvas away from his prying face, but further reading on Gardner shows that he's rather harmless: he sees a therapist and psychiatrist frequently, and generally worships Yoni Tantra. (In laymen's terms this spiritual practice focuses on the woman's womb, sexuality and power). Also, he's a passionate supporter of LGBTQ rights. Pad actually abandoned Christianity because he found many Christians to be hate-mongers.

Okay. It's a bit of a head scratcher, but Gardner seems to have good intentions. Need a refresher? 2013 was, like 365 days ago. Gardner rose to fame through this Tumblr account (aptly named The Feminine Pad) through his unusual desire to be a maxi pad. Identifying as Otherkin (one who is not human, and often reincarnated as a mythical creature), Gardner describes himself as a hygienic pad on the inside (a pink one specifically) with an outwardly human appearance. Pad believes he was a pad in a past life, and will become one again in his next one. (Do pads have souls you guys?)

Anyway. While Gardner is vocal about women's rights (he's been outspoken about the Hobby Lobby case and is honestly better informed about reproductive science than, ahem, certain politicians) he's also an unlikely—and potentially damaging—advocate. Desiring to be an instrument of menstrual blood collection reeks of fetish, not respect.

1. When someone this extreme enters the public discourse and becomes—ostensibly—a voice-box for marginalized "alternative" identity people the world over—like transgender folks for example—the entire fight gets undermined and sidetracked.

2. Gardner has openly discussed his sexual abuse, and some believe this is his way of working through it . . . we're inclined to agree. It's unlikely that someone who has suffered at the hand of this kind of molestation wouldn't posess some sort of psychological fall-out.

3. There's a reason "Meet the Man Who Wants to Be a Kotex" saturates headlines (yes we're culprits too). It's strange and salacious and inspires a certain amount of pity. Male Feminist or not, Gardner isn't helping to advancing a real agenda of gender equality; we need to be focusing on people less odd and more pro-active.

Not so surprisingly, Gardner has also been on the receiving end of equal extremism: he claims he received threats from Men's Rights Activists, in which they demanded that Gardner stop using the men's restroom. Or else.

Today I went to my math class at the college, and upon leaving class I was being followed around by two guys. After leaving the college they continued to follow me downtown as I walked. I realized I was being followed, and hid inside a bathroom downtown. They came into the bathroom, and jumped me. They said I didn't belong in the Men's Room. They hit me in the stomach and ran.

I received an email a few hours ago from a men's rights activist telling to stay out of the Men's Bathroom, and to expect more violence if I continue to be referred to as a male. Well you know what you assholes can have your stupid gender. You know what I'm a pad, and I'm damn proud to be not a part of your violent gender.

At the moment we don't have concrete proof it was the MRA, it seems more than probable. But honestly? Enough is enough. Have your conference. Write your blogs. I support your right to discuss your topics (that I admittedly perceive as mostly dreck) just as much as I fist-pump my own liberties to write and express myself. But physically harming someone to "advance your agenda" is tantamount to screaming over someone else's argument and then declaring yourself the winner. Violence and screaming—metaphysical or otherwise—are tactics used by 5th grade bullies.

But maybe that's the MRA's goal? Those kids were always pretty scary . . .