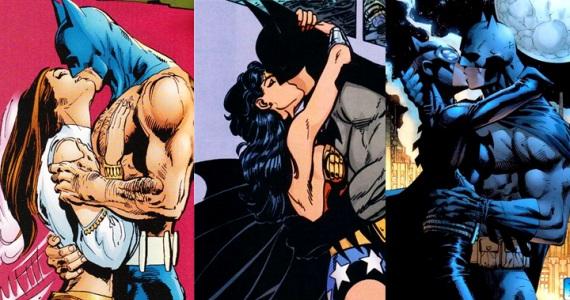 Comic books largely emerged in the wake of the Great Depression, so perhaps it's (sadly) no surprise that they're attracting even more interest these days; I guess we need some good old fashion distraction from . . . just about everything.

In happier news however, today is Batman Day! This masked vigilante hit the comic stands in May of 1939 and struck the fancies of just about everyone. Must have been that anti-gangster, chivalrous, tall dark and handsome kind of thing. Or because Bruce Wayne just rolls off the tongue. Hard to say.

Thanks to the latest Batman trilogy however, recent fans really only know about one love interest: Rachel. Sure, there's nothing wrong with her. She seems cool enough. But for the love of superheroes and ass-kicking, let's remember that Batman was linked to way fiercer females throughout the years.

From an unstable childhood to a crazy adulthood, Selina is a wild one. At times, she is ruthless; she commits crimes so with the casual air of a normal person grocery shopping. While variations on Selina's character differ from publisher to publisher, she is always a thief of some sort. In most cases, she robs from mobsters and other folks up to no good. In doing so, she becomes an outruly anti-hero; Selina does what she thinks is right, despite societal rules.

Batman and Selina make several run-ins before anything happens between the two. Selina is overly flirty, but always a bit perplexing. Modern adaptations have Selina recall a traumatic childhood, wrought with an alcoholic father and suicidal mother.

Hence the, "perplexing" lover bit. Despite the confusion, Batman is drawn to Selina in a manner akin to a adolescent boys' attraction to the elusive, kind of angry, older artsy girl in school.

We can all relate to Talia on some level, who first got into the game alongside her criminal mastermind father, Ra's al Ghul. Despite the fact that Talia was the brightest of his kids, al Ghul believed that women are inferior to men. This, naturally, was his daughter's only shortcoming. Cue eye roll. Right from the get go, whip smart Talia was fighting for our cause.

And, wow, does Talia prove herself. She first met Batman as a mere damsel in distress—Batman saved her from the clutches of Dr. Darrk, but—at

the end of that story—she ends up saving Batman by killing Dr. Darrk. The two begin an on-again-off-again relationship (ugh, those are the worst). Surprisingly, al Ghul is totally down because—get ready to cringe—he really wants a male heir. Batman is worthy of the fortune, but not al Ghul's own daughter. Ick. In any case, Talia and Batman shared many an epic kiss and many adventures.

Yeah. They dated. Nerdtastic spank bank glory for all. Geez, where do we begin. Wonder Woman—or, Diana—was brilliant. She could speak multiple languages (including Martian) and was trained to finesse her mental powers. In fact, her strengths increased as the comics progressed. Goddesses bestowed powers in Diana to make her one of the strongest heros on the GD planet. I mean, the lady lifted bridges and blocked chunks of the moon from striking Earth. Oh, and she could fly. No big deal.

Though her character also made transformations over the years, remember she first graced the comic pages in 1941. And w-o-w was the general response. Of course Batman wanted her! But . . . fans were a bit surprised: wasn't Batman too gloomy for Diana? Apparently, not.

The two were—duh!—drawn to each other out of mutual respect and admiration for the talents of the other. Just like, you know, a real relationship. Diana was a little more into it than Batman, but she was also the one who decided to call it quits.

Why? Ultimately, Diana realized they made better friends and heroic partners than lovers. And, somewhere in the world, Beyonce stood up and cheered.

Main Image: Those muscles though ... Courtesy of, DeviantArt; dc.wikia.com; www.comicwallpapers.co.uk