Female Governors 101: How Much do You Know? 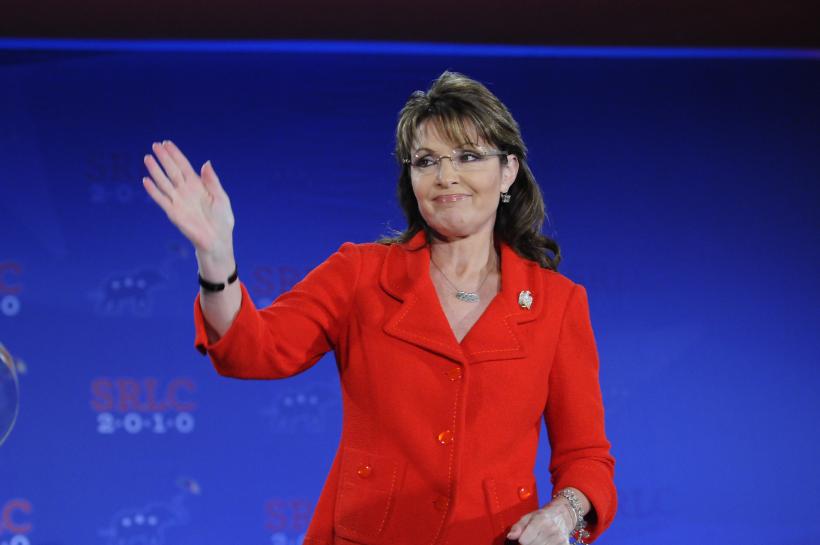 For this week’s installment of First Woman, we’re taking a look at the history of female governors in the U.S. The ascension (or non-ascension) of women to a state’s top political office provides a partial picture of that state, as well as the country as a whole. Who was the first woman to hold the office, and when? What is the distribution of gubernatorial women through time (a steady upward trend? Not exactly). Political party breakdown? Other notable first women in this category? You’ll get the answers to all these questions, and more!

We’re doing some glamorous data analysis along the way, starting with this handy low-tech chart for some grounding in the number of states who’ve put women at the helm. It comes to 26 states in all. Take note, if you will, of Arizona, which has hosted the most women as governor with a grand total of four (specifically, four of the past five governors). 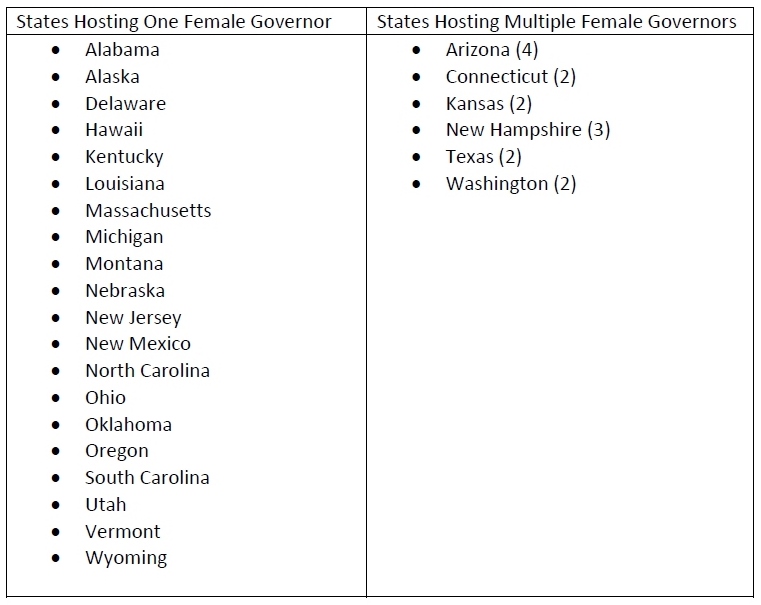 As for those boo-worthy states who elected nary a single woman to be head of affairs? They fall mostly into adjoining chunks along the mid-Atlantic, deep south, Midwest, and what I’ll call the “Gold Mining States” (Idaho, Nevada, California). Also Maine and Colorado—the two exceptions which are surrounded by female-governored states. Are these results random, or indicative of larger gender patterns in certain parts of the country? Theories are welcome.

First woman to be elected governor

Nellie Tayloe Ross, of Wyoming. She served from 1925 to 1927 after winning a special election to replace her husband, who had died suddenly in office. She narrowly lost her re-election bid, probably influenced by her affiliation as a Democrat in an increasingly Republican state.

The next two women to serve were also wives of governors, which positioned them to win their parties’ tickets. Vehement Ku Klux Klan-opponent Miriam Ferguson was governor twice—in Texas, no less—from 1925 to 1927, and 1933 to 1935.

And then there was a significant gap before another woman was elected as governor. A whopping 22 years, in fact. Historians have pointed out that women enjoyed greater societal freedoms in society in the 1920s and 1930s than in the subsequent decades—a fact perhaps reflected in this pause.

Alabama’s Lurleen Wallace broke the streak in 1967, also succeeding after the death of her husband. Sadly, Lurleen—if I may use her memorable first name—only lasted about a year in office before she too met the Grim Reaper.

Ella Grasso of Connecticut stood squarely on her own two feet after bare-knuckling it through her state’s political institutions. She served from 1975 until diagnosed with terminal cancer in 1980. Which means there was another eight year gap between her and short-lived Lurleen. And Grasso had only one other female colleague in the 1970s (Dixy Lee Ray. And with a moniker like that, she must have represented . . . Washington?).

It wasn’t until the 1980s that women started really getting some momentum in the office—six ascended in those years. Since then, there’s been a modest increase by decade, which the 2010s are keeping pace with so far (half way through the decade, there have been 14 female governors). 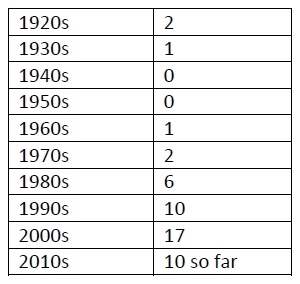 Susana Martinez, New Mexico, 2011 to present. She worked her way through the state’s justice circuit, and was named as one of Time Magazine’s 100 most influential leaders in 2013, receiving a write up by none other than W. Bush administration darling, Karl Rove.

Nikki Haley, South Carolina, 2011 to present. A daughter of Sikh immigrants from India, she is also the youngest current governor at 42.

And despite their role in literally the entire history of the United States, there has yet to be a black female governor. Funny enough, both Martinez and Haley are Republicans. Ha! Overall, there have been 14 female governors of the Grand old Party, and 20 Democrats.

Altogether, five current governors are women. That means 10% of states currently have female governors (for those who may have forgotten, we have 50 states). Women make about 51% of the population, so you can see the discrepancy. True, the numbers now are a lot better than the literal zeros of the 1940s and 1950s, and the upward trend is heartening. But it will no doubt be a long road to numbers of female governors even approaching an even split with men.