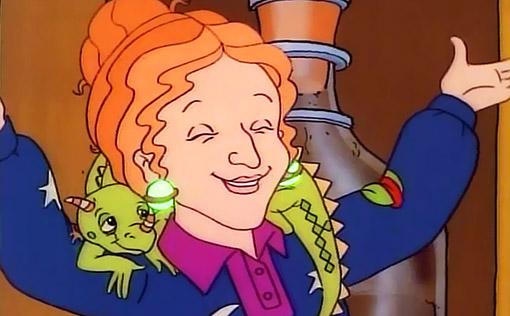 Ah, the glory of the Frizz. Courtesy of YouTube

​Maybe you already caught wind in June that Netflix will be launching a digitally re-vamped version of The Magic School Bus as an original series in 2016. You might have tasted plaster after pumping both fists through the ceiling in a leap of joy; you might have groaned with annoyance over a difficult-to-articulate, but nagging sense of theft.

Now that the video streaming megalith has seen impressive watch counts on its offering of the Scholastic originals, the path toward a remake seems inevitable, so we can't help but take a moment to digest how we feel about it. (Which we can also accurately visualize, thanks to that stupidly-awesome episode where Miss Frizzle guides a shrunken School Bus through a student's GI tract—complete with a graceful exit via a hearty burp).

The Magic School Bus was the longest-running educational series for children that tackled the sciences; since its 1994 debut the Frizz has inspired millions, firmly cementing its iconic status with millennials. Can Netflix's stab at this arguably already-perfect wonder of animation really have any hope of living up to our expectations?

How to Ride the New Bus
Here's the thing. Just like Treasure Trolls, Bop Its and Polly Pockets, the close to jaw-dropping wonder you felt when you first experienced The Magic School Bus isn't ever going to be replicated—certainly not with the god-awful "advances" made in cartoon composition these days (try to tell me Frozen was half as pretty as Pocahontas. Try.) The bottom line is, things just won't be the same. They say acknowledging the problem is Step One, so now that we've gotten that out of the way, we can get to analyzing the meat of the series.

Now and Then: How Kids Learn
While 2016 is still but a glimmer on the horizon of our Netflix queue, something else can almost be counted on when it comes to making predictions as to the direction of the new Magic School Bus: the techniques used to hold its audience's attention. Children today have shorter attention spans than ever, and more interactive options such as video games and texting can outpace a thirty-minute or hour-long block of television. To counterbalance this, Netflix will have to switch things up a bit to mold its revised remake a success with kids.

One unique idea could lie in the overall composition technique; research shows that smooth and rounded shapes tend to be more relaxing (and therefore less stimulating), whereas sharply-angled images are more jarring (and thus attention-grabbing). Perhaps we'll see an overhaul on design of characters and setting to reflect these findings.

Another possibility relates to selection of content topics. When it comes to the over-arching approach to presenting children with new knowledge, research has shown that kids prefer learning about general themes, rather than specific details. In one study, four and five-year-olds were given a choice between learning about an individual subject or an overall topic—or as the paper refers to them, "things" and "kinds" (of things).

Subjects sat with a teacher/researcher who held up images of uncommon animals; for half of the sample pool, the researcher claimed to be an expert on the exotic species, while in the second half she told the children she didn't know much about the animals, but could guess some things about them. In both segments, she then asked whether the subjects would like to learn specific information on that individual animal, or information about the species in general.

When the researcher claimed to be ignorant about the animals, the children showed no preference as to whether they learned individual or special information. When the researcher introduced herself as an expert however, 64% of the children wanted to know about the kind of animal presented, rather than the individual in the photo. When it comes to storylines and character development in the new Magic School Bus series, this data could be particularly useful.

Now that we've accepted that Netflix's new take on one of our childhood favorites isn't going to mystically transport us back to our glorious School Bus days of yore, maybe we can appreciate this renewed effort at making learning cool again for kids. After all, now that once-awesome networks like Discovery and TLC have now gone the way of reality TV junk buffets, the next generation needs all the help it can get.