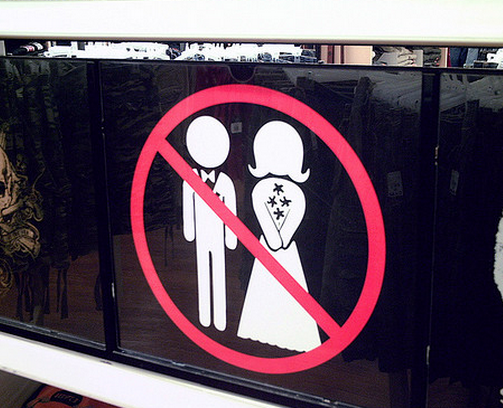 All praise Samantha Jones: The single adult population now outnumbers the married folk in the U.S.!

That's right, all you single ladies, the Bureau of Labor Statistics found (in its monthly job report, no less) that 50.2% of Americans over the age of 16 are unmarried. Apparently this figure had been looming just below 50% for over a year now. The increase is especially surprising given the rapid overturning of gay marriage bans in recent months.

So what gives? Some pop socio-cultural theories abound:

1. People Are Marrying Later
The prevailing theory is that Millennials see economic stability as a prerequisite for marriage—and we don't need to tell you that the U.S. has seen better days when it comes to economic prosperity. With university costs rising and more people stuck in debt, our generation is waiting longer to put a ring on it.

2. Women's Liberation
Despite constant—and maddening—evidence to the contrary, women's rights have actually come a long way in recent history. By gaining more power financially and socially, women who may have flocked to a husband for security now pull themselves up by their own Fendi—or Sketchers—bootstraps.

3. Sexual Revolution
Polyamory, serial dating and other previously unconventional love preferences are—hurray!—more socially acceptable now. Well done, fellow Millennials! While this in no way means that everybody's "doing it," spreading the idea that such fun is A-OK allows lascivious weirdos like me to follow their own lust without feeling the need to conform to societal expectations of marriage.