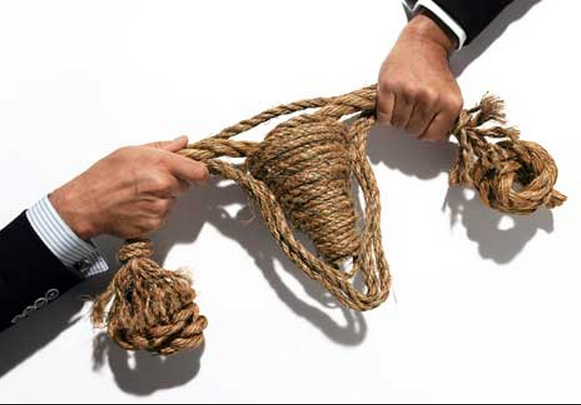 If it were possible to forbid certain men from sipping coffee in "#1 Dad" mugs, we'd be storming off to Missouri to snatch it from the undoubtedly scaled claws of state Representative Paul Joseph Wieland. On principle, I do not make a habit of condemning the parental rights or abilities of public figures. This situation however, breaches so egregiously into the offensively outrageous, it's become impossible to keep silent.

Last year (before the odious Hobby Lobby ruling) Wieland filed a lawsuit against the United States Department of Health and Human Services. Wieland was just gutted that the provisions of the new Affordable Care Act (yes, the much-dreaded Obamacare) granted his daughters (ages 13, 18, and 19) access to free contraception under his insurance plan—which they are eligible to be covered under until age 26. This is, in Wieland's opinion, a direct violation of his Catholic beliefs. So now he's going to trial over it.

Why is this so bad?

Where to start. How about here: The vast majority of people under 26 have had sex—regardless of religion. And only 3% of people actually wait for marriage to get it on. So sorry, Representative Wieland, but your daughters are more than likely to have some sexy times before they go off your insurance. And bearing in mind that these daughters are, you know, autonomous human beings fully capable of making decisions about their own beliefs, even if they were to adopt strict Catholic identities, a previous study found that 98% of Catholic women have used contraceptives (other than the "rhythm method," which, c'mon doesn't really count) to prevent pregnancy.

So, it's safe to say that most young Catholic women will use some form of birth control/abortion prevention at some point in their inevitable sexcapades—married, single, or otherwise.

When we see such statistics, it seems unlikely that religion is the true motivation here. While this, "in-the-name-of-God" justification is a possibility, Wieland's lawyer—attorney Timothy Belz—made comments that suggest other motives are at play:

"The employees are to Hobby Lobby what the daughters are to Paul and [his wife] Teresa Wieland.”

Firstly, does anyone else find this metaphor of employers being like parents, rather disturbing? Secondly, can we talk about the fact that the judge presiding over the case helpfully pointed out to Belz that parents should have more control over their children than employers over their employees?

Why oh why is control at the crux of this conversation? Employers and parents should been concerned with fostering the healthy growth of their "offspring" (that's a metaphor we can get behind) not dominating their decisions. Especially in regards to their body.

“Well, we all have high hopes for our kids, that is true. We all expect and want them to obey us, they don’t always . . ."

A History of Control

Contraceptive methods are offered under the insurance plan for those who want it. Being eligible for free birth control does not mean one is forced to use it. Plus, hello, there's always Planned Parenthood; people will bypass your said control to gain access to the services they need. (Hopefully.)

More importantly, we think to think progress happens for a reason. Let's take a trip down memory lane to understand why it's vital that we don't take three steps back. (Unless you're doing the cha cha slide.)

Under the reign of Roman Emperor Augustus, citizens saw the implementation of collective laws called Lex Julia. The goal was to restore the traditional family (hm, why does that sound familiar?) and ensure its longevity. Everyone had to be married by a certain age, and no one was to have sex outside of marriage. Except, of course, men—who could fornicate with hookers as much as they wished.

If a woman had sex outside of marriage, though, both her father and husband (if she had one) were permitted to kill her. If they failed to punish her, she'd be dragged to court and her fate would be decided by another.

For much of the Middle Ages, wife abuse was more-than-tolerated. In fact, just about everybody from lovers to children and serfs all feared the fists of the head of the family. When women aired their pain to priests, they were encouraged to work harder in their relationship with their husbands as well as with God. Though beating was acceptable, excessive abuse was eventually (meaning by the end of the era) deemed reasonable grounds to divorce.

One famous case, featuring a woman named Sitella and her husband Guilielino, ended in Sitella's favor sort of. While she did escape her abusive husband, she was forced to return to her father's home, sans dowry, and was forbidden to remarry. Her father did indeed fight for her release, but also regained full control over his grown daughter.

It's not just about women, children have suffered under the authority of parents as well. In good ol' America, it took until the mid 19th century to secure protection for abused children. A orphaned child named Mary Ellen—who had been systematically abused by her caretaker—was rumored to be living in rags and severely malnourished. Church worked Etta Wheeler sought her out and discovered a cowed child that looked five, but was actually nine. In the wake of seeing the neglect Ellen suffered, Wheeler took it upon herself to form the New York Society for the Prevention of Cruelty to Children (NYSPCC).

The first meeting of the NYSPCC took place on April 29, 1875. From there, they worked tirelessly to secure safety rights for children—including from their own parents. Yet, it took 99 years (January 31, 1974) to instill the Child Abuse Prevention and Treatment Act (CAPTA), which provided federal funding to the states to investigate, prevent, assess, prosecute and treat instances of child abuse.

Given this lengthy history of abuse—misogynistic and otherwise—I remain utterly baffled that a father would fight to exert more control over his children under the auspices of religious adherence and bodily protection. The strides we've made in protecting women and minors have evolved for tangible and harrowing reasons. While I'm not saying Wieland would purposely wrong his daughters, his stance, if successful, could permit others to grossly eclipse the efforts we've fought so hard to protect.