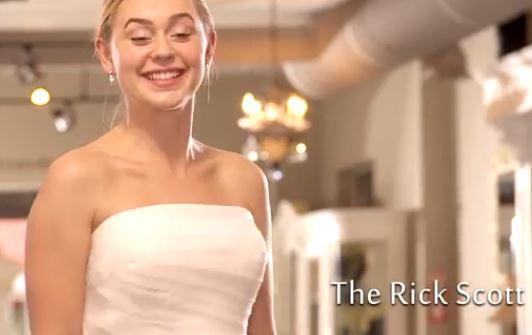 The Republicans are just desperate to woo women and the youngins. And we suppose desperate people do desperate things. But even within that context, it’s hard to see how anyone could have possibly signed off on, much less fund and then film, the latest ad campaign for Florida GOP governor Rick Scott.

The ad, paid for by the College Republican National Committee, is titled, we shit you not, “Say Yes to the Candidate.” Modeled on the TLC reality show Say Yes To The Dress, which centers around women choosing the right wedding gown, the ad is actually so tone-deaf as to move into Amusing-ville.

In it, the young female ballot-castor/bride wants to vote for Republican governor Rick Scott. Her mom, the harpy, presses the young dress-donning voter to to pick Democratic candidate Charlie Crist instead. She responds:

“Mom, this is my decision. And I see a better future with Rick Scott.”

The ad, it turns out, was actually made in bulk, so in some videos, our wedding-crazed protagonist is "saying yes" to "The Rick Snyder," "The Tom Corbett" or one of three other candidates—making it especially clear that this video is not about the candidates themselves, but about the presumption that women will vote for any damn person if he's personified an a pretty shiny wedding dress. The video also comes on the heels of an ad connecting voting with dating, suggesting the GOP's belief that women only think about boys, boys, boys runs deep.

In any case, you know how videos occasionally go viral for reasons not intended? This actually might be the best example we've seen of that. And though going viral can often translate to awesome exposure . . . I’d bet all the frocks in my closet that this ad will do nothing to score the desperate GOP the votes it seeks.

Possibly the only thing more offensive than an ad courting female votes by using a show based on weddings, are the comments GOP strategists are making about it. College Republican National Committee chairman Alex Smith told the Wall Street Journal that this ad—which, get out the popcorn, will be the first of several—is intended to make the Republican Party seem “culturally relevant” to “the generation that has their earbuds in and their minds turned off.”

Wait, what’s that Ms. Smith? I couldn’t understand you as I was too busy with my earbuds in listening to One Direction to have my mind turned on. No but really, is she for real?

There’s a reason a recent report, commissioned by Republicans, found that female voters view the party as “intolerant,” “lacking in compassion” and “stuck in the past,” making them “barely receptive” to Republicans’ policies. Actually, scratch that. There are a ton of reasons for this—and it has everything to do with our fully-functional and multifaceted minds being open and tuned in to what’s going on.

Rick Scott? The candidate the young bride is so fervently saying yes to? Gee whiz, he loves him some abortion restrictions. (On that note, by the way, a new report has found that states with the toughest abortion restrictions have the poorest health outcomes for women. Lack of abortion access has also recently been tied to women staying in abusive relationships.)

If the GOP really wanted to seem culturally relevant, they would adjust their policies to be more (read: at least a little bit) women-friendly. Instead of, you know, fighting against reproductive justice, unanimously blocking the equal pay bill and spouting off egregious comments on rape.

If candidates supported policies that contributed to my reproductive and economic justice, I'd definitely think about throwing 'em a vote. But a party that tries to win votes by shoving offensive dress-oriented ads down my throat, because they believe weddings are the one thing that will resonate with me? I'll pass.

That said, I will look forward to the next ad . . . for sheer entertainment value.

If you like this article, please share it! Your clicks keep us alive!
Tags
Rick Scott
Charlie Crist
abortion
Say Yes to the Dress
say yes to the candidate
Election
campaigns
Ads
women voters