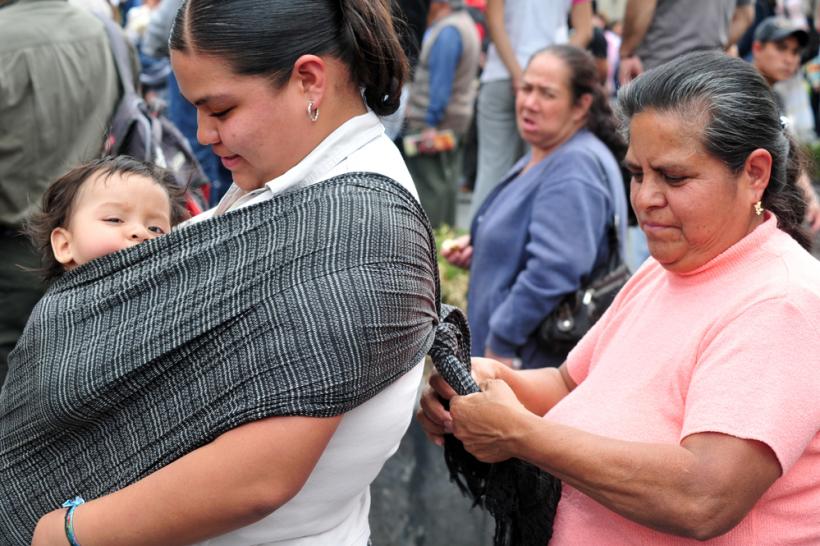 Lloyd abused his power when he interjected himself into the lives of these teens to further his own agenda and terrorize vulnerable, young brown girls.

The Trump administration tried to force her to give birth against her will.

In 2017, a pregnant seventeen-year-old girl crossed the US border into Texas from Central America. She aspired to go to college and become a nurse, but when she requested to terminate her pregnancy, Scott Lloyd, the Director of the Office of Refugee Resettlement (which provides shelter and medical care to unaccompanied minors) under the Trump Administration, personally tried to stop her.

The Trump administration has argued that an undocumented status precludes women from the right to an abortion in the US. So, when a teenager crosses the border, are they are immediately stripped of their bodily autonomy? Are rape victims now forced to carry their attacker’s child?

Lloyd, an ultra-conservative attorney who came to the ORR office with no experience in refugee resettlement, trauma, and child welfare — and once paid for his ex-girlfriend to terminate a pregnancy — has been publicly decrying a women’s right to choose for decades.

Under Lloyd's command, the ORR office wasted no time promoting his “pro-birth” agenda. Lloyd reversed the decades-old policy under Obama and Bush which allowed pregnant, unaccompanied minors to terminate a pregnancy as long as they obtained private funding and the government did not pay for any part of the procedure. Lloyd, who has compared terminating a pregnancy to the Holocaust, then waged a campaign of harassment and intimidation on young, vulnerable, pregnant, undocumented, brown girls — many of them fleeing escalating violence in Central America.

Lloyd ordered shelters not to allow pregnant teens to leave for medical appointments unless they were approved personally by him. He forced shelters to take pregnant teenagers to religious-based pregnancy centers that oppose abortion. Lloyd once even directed a shelter to halt a medication abortion after the young woman had already taken the first medication dose so he could look into using a suspicious, unsubstantiated method of trying to "reverse" the abortion. Lloyd also denied a pregnant rape survivor (who had threatened self-harm if she was forced to continue the pregnancy) an abortion — ignoring her pleas for help and claiming he was acting in her "best interest."

Lloyd later reported that the abortion was denied because it "might further traumatize her" — which dangerously overlooks and minimizes the trauma and suffering of being forced to carry her rapist's baby to term.

Lloyd went to see one teen in custody to try to discourage her from terminating, called another young woman to pressure her out of having an abortion. In another case, a couple contacted Lloyd's office after hearing about one of these pregnant girls and offered to adopt her baby if she gave birth. Lloyd then directed his staff to give this message to that teenager, despite having no idea who this couple even was or having screened them in any way — all of which is an egregious abuse of power.

“Everyone is entitled to their beliefs about abortion in this country, but it is an entirely different matter when a government official assumes power and uses those beliefs to personally coerce women,” reports Brigitte Amiri Deputy Director of the ACLU’s Reproductive Freedom Project and one of the lawyers now suing Lloyd.

Not only is Lloyd pressuring these teenagers into being mothers, but he is also the one who directly oversees their care in the US and can be a powerful influence over their fate in America. If they disobey his “request,” what increased risk is their asylum application in?

“I feel like they are trying to coerce me to carry my pregnancy to term,” stated the 17-year-old girl in the Texas shelter who reported being one of those forced to go to a religious-based pregnancy center, where they pressured her into keeping the baby and made her have a sonogram to look at the fetus. “I am not ready to be a parent. I made my decision, and that is between me and God.”

The ACLU filed an emergency lawsuit on her behalf on October 13th 2017 stating that she has been “subjected to egregious delays in her medical care as well as counseling and procedures without her consent” and restricted from going to see her medical provider, even though her court-appointed attorney/guardian could drive her and she had secured private funding for the procedure.

In addition, the lawsuit stated that federal officials informed this girl's mother about her abortion, despite her request not to tell her mother and there was no legal requirement to do that since she had already obtained a court order permitting her to have an abortion without notifying or requiring consent from her parents. (Texas law requires teenagers to obtain parental consent for an abortion except in certain circumstances.)

You Might Also Like: The Right To Govern Your Own Body Shouldn’t Depend On Where You Live

Throughout several hearings and appeals, this case then came before a three-judge panel on the D.C. Circuit court (Brett Kavanaugh was one of those judges) in which their ruling continued to impose delays, block her ability to terminate, dismissed key parts of the ACLU’s case, and then sent it back to the district court. Then, on October 24th the DC Circuit Court of Appeals ruled in her favor, and her pregnancy was terminated the next day. There is still pending litigation surrounding Lloyd's policies at ORR due to the grave concerns that he is violating the constitution when he imposes his personal beliefs on the young women in ORR’s care.

The Trump administration has argued that an undocumented status precludes women from the right to an abortion in the US. So, when a teenager crosses the border, are they are immediately stripped of their bodily autonomy? Are rape victims now forced to carry their attacker’s child?

The Trump administration also asserted these unaccompanied minors have a choice — they can leave the country and give up their immigration/asylum petition and terminate their pregnancy elsewhere.

But that is an ultimatum — not a real choice. It forces children to either go back to the very country they just narrowly escaped from with violence, gangs, political unrest, and extreme poverty or become a teenage parent.

Ala Amoachi, a New York attorney who represents unaccompanied minors from Central America, reports that the violence is getting worse. "Gangs are now targeting younger boys and girls and pushing them to flee. Before, it was 12 or 13, but now, for the first time, I’ve been hearing multiple stories about children as young as six or seven being forced to join, or killed for not wanting to join the gangs. We’ve had kids in here as young as four years old reporting sexual violence.”

The Trump administration also claims that if unaccompanied minors are able to terminate a pregnancy this will open the floodgates of teens arriving at the border, not because they are fleeing violence and persecution, but to get an abortion — despite there being no evidence to support this, not even when young women could access better reproductive care under previous administrations. In fact, the research shows just the opposite. There has never been a documented influx of teenagers crossing the border seeking terminations. There were reportedly 38 pregnant unaccompanied minors in custody in March 2018 and of those 38 only a handful sought a termination. In addition, the journey to America is extremely dangerous, physically debilitating, and the rates of sexual violence (which also results in pregnancy for many of these girls), human trafficking and forced prostitution while these young women try to make it the US border are staggering. The notion that they would risk all of this to access America’s abortion laws is preposterous.

Lloyd's pro-birth crusade also conveniently ignores the incredible struggles for young, unaccompanied girls forced into motherhood. While Lloyd romanticizes his crusade as supposedly about saving a life, he willfully ignores how these young girls will care for a child. Should teen parents, undocumented or natural born citizens need to utilize the support of various social service programs, they face opposition from the Trump administration on that as well. In addition, those who are undocumented are already barred from receiving most entitlement programs (welfare, SSI, food stamps).

Lloyd is not actually pro-life, he is pro-birth. He has no interest in preserving the life of these babies after they are born.

Lloyd abused his power when he personally interjected himself into the lives of these teens and used the federal government, a non-religious entity, to further his own religious/political agenda and terrorize vulnerable, young brown girls.

To deny women reproductive care is to deny them their most basic right of all — the right to control their own body.

If you like this article, please share it! Your clicks keep us alive!
Tags
US border
Trump administration
race
abortion
ACLU
Immigration
racism
Mexican
mexican-american