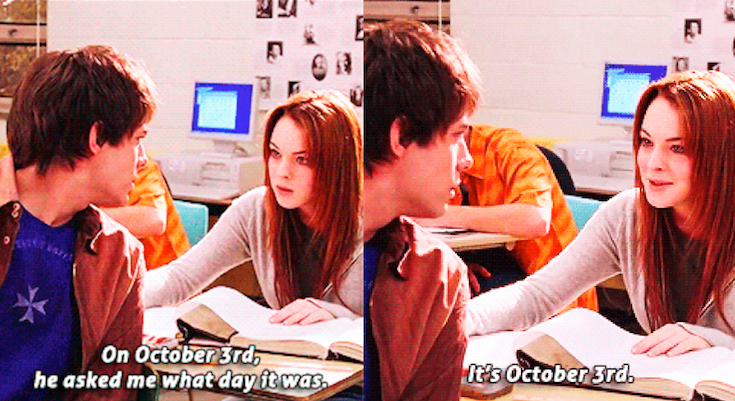 Everyone stop what you're doing. This is more important.

Today, October 3, is related to the cultural phenomenon that is Mean Girls. In the movie, awkward newbie Cady Heron crushes on the guy who sits in front of her in Calculus—Aaron Samuels. Not much happens between the two in the beginning. They exchange brief words ("it's raining"), but that's it. Doesn't matter, though—Cady is ultra-stoked that he's merely contemplating her existence. She catalogs their encounters with the fervency of an elderly stamp collector spying the infamous Charade square beauty.

In the scene that determines today's significance, Cady narrates:

Cut to Calculus class. Cady too-enthusiastically answers, "it's October 3." Swoon? Watching that scene as an adult is a tad painful. Being a teenager is terribly awkward to begin with, but the added layer of sexuality-related confusion just worsens everything. What's going on here?

Why Was Cady So Excited About Being Asked The Date?

By the time we're adults, it's more difficult to get excited about something like this. Having a crush is fun, but we don't revel in our feelings like we did with the hotties from our teen years. Call it wisdom or something, but adults have a different way of processing sexual elements than teens. Studies have shown that adolescents get most of their sex education from the media [insert outrage here].

Take a moment and think about the sex scenes you've witnessed. Remarkably, Hollywood forgets the difficulty of removing skinny jeans in the heat of the moment. Climaxing simultaneously is a given. And sheets are shaped like a capital "L." Point is: if this is a teen's guidebook, it's loaded with false information. It's make-believe.

That may partially explain another element of teen crushes. Psychology Today reports that most adolescent crushes are primarily based in fantasy. The teen is projecting traits they desire on a human canvas, without much knowledge of the actual person. An embarrassing example from my own life: I formed a huge crush on a boy who sat in front of me in 9th grade geometry based on the quality of his hair. Because he took care of his (not sure I ever learned his name) hair, I decided that he must be nice, tidy and smart. These were qualities I admired—but not ones the back of his head definitively confirmed. The report also states that crushes often fade when the person reveals his/her actual qualities.

Consider this: teens' primary of understanding of sexuality and the subjects of their romantic leanings are both based in fantasy. Adults (usually) have far more world experience that prevents such imagination from taking off like this. For teens, the thrill of a crush isn't always about getting to know a cool new friend; rather, it's about getting drunk off that crazy cocktail of hormones raging in the ol' brain. Aaron merely speaking to Cady demonstrates this. We grown women would need much more to make us jittery and giggly.

Aren't you glad the teen days are over?