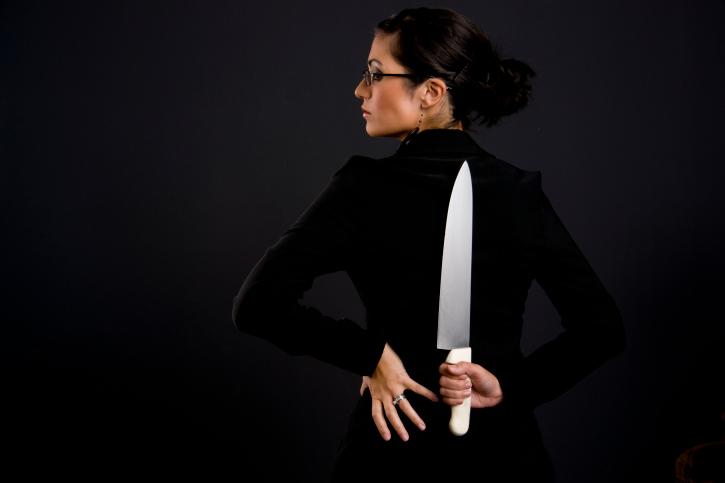 Picking up where we left off yesterday with the History of the Femme Fatale Part I, we travel to . . .

Romantic poets love the shit out of this femme fatale trope. One of them, John Keats, spelled out the topic in a ballad called "La Belle Dame Sans Merci." The title translates to "The Beautiful Woman With No Mercy"—bet you can probably guess the jist of it from the title alone.

I'll flesh it out for you anyway. The speaker of the poem opens up with major complaints about a heartbreak. Guy is having just a rough time. He proceeds to explain why. Apparently, he met a beautiful woman with "wild" eyes. Like any strapping young man would, he made a "garland for her head" and some bracelets (remember: this was before Pinterest and music festivals). The minxy little mistress seemed pleased. In fact, "In a language strange she said—'I love thee true.'" They fall asleep together. Dreams warn the speaker that this woman is dangerous. Those that warn him are all esteemed men: warriors, princes and kings, in fact. They're drained of life (as evident by their "death-pale") due to this lady's abhorrent ways.

When the speaker wakes up, the woman is gone. He's alone on a cold hill and the birds aren't singing. Our speaker friend is devastated and alone. #FemmeFataled.

Around this time, the femme fatale crops up in classic rock. One of the most famous, "Black Magic Woman," captures this perfectly. Technically it was done by Fleetwood Mac first in 1969, but Santana really took this tune to the top in 1970. The singer talks about his lady friend whose sexiness is clearly bent on destruction:

A few years later (in 1974), Queen released "Killer Queen." The lady (yes, it's about a female) is compared to Marie Antoinette—yet, she's irresistible to all. They sing: "Dynamite with a laser beam. Guaranteed to blow your mind, any time." Again, she's deadly but her sexiness is a feat.

Bookending this decade, we have a series of femme fatales in James Bond movies. Again, we see intelligence and badassery—but it's all, of course, to serve Bond, both his challenges and his sex drive.

This trope still thrives in parts of pop culture. Although some women now embrace it. In film we have Jennifer's Body in 2009, which traces the evolution of a promiscuous cheerleader who seduces men and then—literally—devours them. It was written by the hilarious Diablo Cody, so it's tough to tell if she's mocking the archetype or simply trying to tell a story about a possessed teenager.

Following the man-eating theme we have Nelly Furtado's "Maneater" (2006) and Kesha's "Cannibal" (2010). In both of these songs, the women are owning their status. "Maneater" (not to be confused with the 80's classic by Hall & Oates) has Nelly bragging "you either want to be with me, or be me!" Yet, in the chorus we learn that her wily ways make men crave her love—and go into credit card debt. Just how I would want my future daughter to behave . . .

Kesha's jam takes the metaphor further. She "eat[s] boys up, breakfast and lunch." What does she do about thirst? Ahh, "drink their blood." Kesha pushes this all a bit further in her verse: "Whenever you tell me I'm pretty, that's when the hunger really hits me. Your little heart goes pitter-patter. I want your liver on a platter!" She even throws in a Jeffrey Dahmer reference. Similar to Nelly's song, Kesha's message is this: being a heartbreaker gives one power over men.

The femme fatale archetype hasn't evolved—or faded—much over time. That's not unusual (um hi, Christ archetype). What's interesting, though, is the power it is so often portrayed as wielding. The Sirens managed to intrigue and render epic hero Odysseus useless, even though he'd been warned. Morgan le Fay toyed with Sir Gawain's life, using him as a pawn in her bigger plot to ruin King Arthur's name. You get where I'm going. It seems that women have turned around in recent years to harness this authority (cue: Nelly Furtado, Diablo Cody and Kesha).

Is this power a good thing, though? Having power is nice, yes, but using it for the wrong reasons isn't. The femme fatale theme can embody many positive attributes—beauty, intelligence, drive—but uses these gifts for maleficence. Back in the day, was this trope used to illustrate the fear that men of the time actually felt? Did it offer some kind of justification for an unjust society? Whatever the reason, danger and female sexuality remain linked.

And it's all cultivated in Nelly and Kesha sharing a fine lunch of man meat today in the modern era.