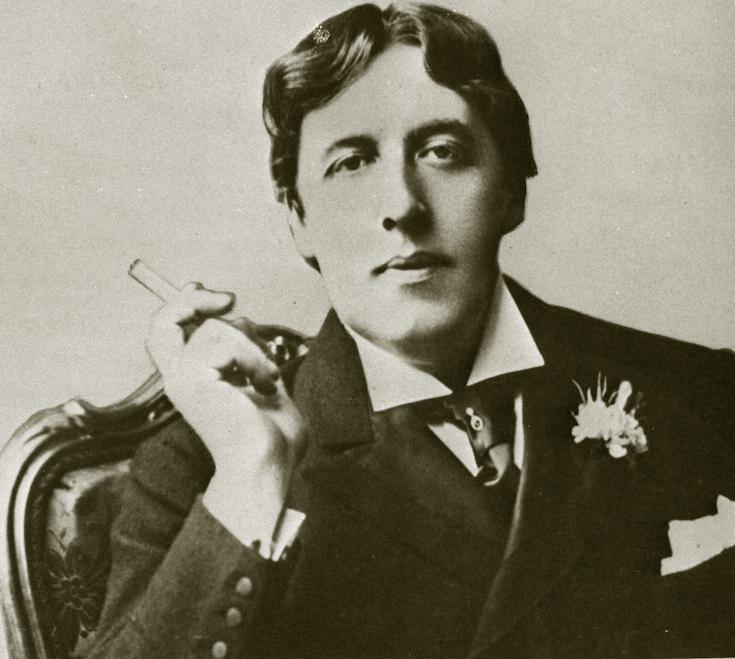 Today is the birthday of celebrated author and playwright Oscar Wilde. Know the name? He wrote, among other things, the renowned (and hilarious) The Importance Of Being Ernest and authored the much Pinterested quote: "Every saint has a past, ever sinner has a future." If he were alive today, he'd be 160 years old. And though we don't know exactly what he'd be up to, we can bet he'd still be getting randy.

Though Wilde was married, he had countless clandestine liaisons. Wilde's trysts with men brought him to court in 1895 (cheers to progress since then), and countless documents detail his scandalous sex life.

Alas, a chambermaid can only see so much. An apprentice electrician named Wallis Grainger had a better story to tell. For reasons still unclear, he was spending some time alone with Wilde when:

"[Wilde] came into my bedroom and woke me up and told me to come into his bedroom which was next door . . . he worked me up with his hand and made me spend in his mouth."

Despite the affairs, Wilde connected intimately with Lord Alfred Douglas, who he affectionately called "Bosie." They met when Douglas was about 21, and their romance quickly escalated from there. Douglas wasn't particularly well-liked by the other village dwellers (he looks pissed off in literally every picture of him ever), but Wilde was wild about him (get it? See what I did there?). Wilde once wrote to Douglas:

"It is a marvel that those rose-red lips of yours should have been made no less for the music of song than for the madness of kisses. Your slim gilt soul walks between passion and poetry. I know Hyacinthus, whom Apollo loved so madly, was you in Greek days."

Douglas' father was less-than-thrilled about his son's affair, and it was this anger that brought Wilde to court. After Wilde was tried, convicted and imprisoned, communication ceased between him and Douglas. Wilde wrote a scathing letter to Douglas, calling him out for his abandonment.

"But most of all I blame myself for the entire ethical degradation I allowed you to bring on me. The basis of character is will-power, and my will-power became absolutely subject to yours. It sounds a grotesque thing to say, but it is none the less true."

Ah, haven't we all felt this way? Later, the two reconciled. Then bitterly parted. Then trash talked each other.

Turns out dating hasn't really changed much since then.


*a diligent reader named Katharine pointed out to us that "soil" was also a euphemism for feces. Though, because I'm prissy, I'd like to believe it was actual dirt!

If you like this article, please share it! Your clicks keep us alive!
Tags
Oscar Wilde
Sex
sexy
gay
bi
straight
married
LGBTQ
The Importance of Being Earnest
A Woman Of No Importance
Relationships
Love
literature
playwright
every saint has a past
every sinner has a future
Lord Alfred Douglas
poet
sonnet
Bosie
prison