Scientific Proof That Women Are Funny 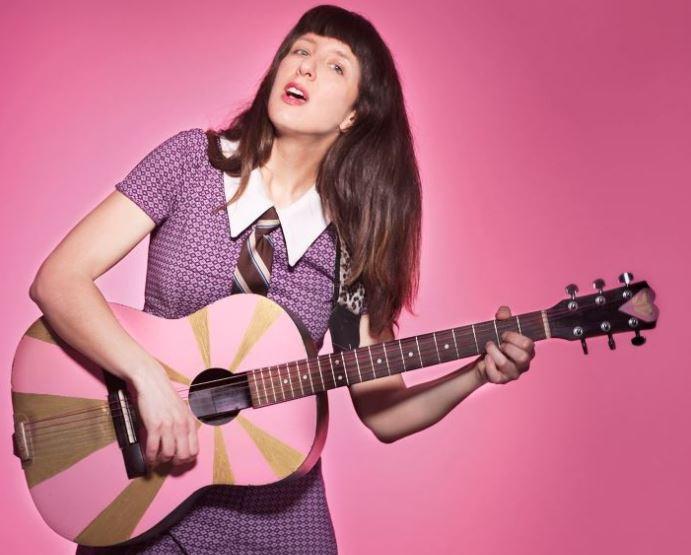 This is a guest post by Jessica Delfino for a special Ravishly series exploring the gender gap in comedy. Read our editorial take on the issue here, and stories from six other female comedians here.

Delfino has performed her quirky comedy songs all over the world. Called “Lower East Side’s Queen of Obscene” by The Village Voice, she has appeared on Good Morning America, the Russell Brand radio show, The Dr. Demento Show, SiriusXM, BBC and CNN, and performed at the infamous Reading and Leeds Festival, Edinburgh Fringe Fest, Dublin Comedy Festival, on Fox News Red Eye with Greg Gutfeld and more. Jessica has also written songs for major feature films and regularly performs at NYC’s best music and comedy venues. Jessica is the host and one of the creators of the annual NY Funny Songs Festival. You can see her in the upcoming documentary about Dr. Demento's life.

There are a few age-old questions: Which came first, the chicken or the egg? Why are we here? And of course, “Are women funny?”

The short answers to all three are: The egg, we are an accidental planet of mistakes and yes.

Here’s a round up of some of the “Are women funny” arguments and scientific proof that the answer is, indeed, a combination of “Yes” and “Fuck you if you don’t think so.”

Case closed:
There are thousands of women doing comedy representing basically every national heritage. There are Spanish, Italian, Greek, Indian, Native American, African American, French, Irish, Chinese, Japanese, African, South African, American and many other kinds of ians, chs, ishs and icans doing comedy of all types. In a recent search for an African American female comedian for Saturday Night Live, virtually tens of women-of-color turned up to apply for the job.

But if you do a quick Google search or ask your nerdiest friend, you’ll find there are thousands of very funny women out there who maybe just haven’t had a major mainstream breakthrough just yet. Watch an episode of the Netflix gem Orange Is The New Black, which is teeming with female comedians playing the roles of ladies in jail, or check out any comedy show in a nearby basement or attic (comedy’s natural habitat), for proof of that.

If you are having trouble counting more female comedians than you have fingers and toes, or would like to be comedically enlightened, please see Sara Schaefer’s list of the binders full of women out there currently doing comedy.

Case closed:
When recently (2013) asked at the Cannes Film Festival if women are funny, Jerry Lewis, then 87, said "I can't see women doing that. It bothers me . . . I cannot sit and watch a lady diminish her qualities to the lowest common denominator . . . I just can't do that." This isn’t the first time he’s voiced his opinion about women in comedy. But let’s examine the facts. Jerry was just 20 years old when he started his comedy duo act with Dean Martin. The year was 1946. Life was dramatically different—most people didn’t have a TV, and most women were not liberated or even wearing pants.

The world of the 1930s that Jerry Lewis grew up in was one where women were treated primarily as possessions and baby makers. That is not an excuse for his ignorance, but the fact is, he is an alien living in another time on a different planet. He probably also shits himself sometimes. My grandfather in his 80s says some pretty insane things too, but he’s not a famous comedic celebrity speaking on the topic of female comedians, so no one cares. Asking Jerry Lewis what he thinks about women in comedy almost isn’t fair. It’s like asking Hermann Göring what he thinks about Jewish people. You know what he’s going to say.

Christopher Hitchens was probably kidding, in some sense, as was Martin Short. Not every joke lands the way we want it to, but Christopher Hitchens was an over-the-top guy and he knew exactly what he was doing, and how the public would react. He spoke and wrote like a typical alpha every-dad who knows it all. That was his gig. You’ve heard of low-brow humor—Hitchen’s act was low-blow humor. The guy dissed Mother Theresa. Nary a moment went by that he wasn’t loaded on booze, like most comedians—and it fueled his over-the-top act, which mingled with his real-life personality, and even inspired Ann Coulter’s comedy routine.

The fact is, the statement “women aren’t funny” is a joke. At this point, it’s an easy one. People know it’ll get attention. Some people really have a hard time taking a joke, especially if the joke is on them. But even if Hitchens, Short and any other blow hard, antique-minded man who said "women aren’t funny" weren’t kidding in some aspect, it doesn’t matter. Martin Short is no longer relevant and Hitchens is dead. His and other people’s words linger on, only because the media knows that the story (and it is just another bedtime story) “women aren’t funny” will generate hits and make money. If you really don’t believe that women are funny, that’s OK. Not everyone believes that all people’s opinions are valuable.

If you do believe that women are funny, prove it by voting with your dollars. Go to see female comedy shows. Invest in and produce female-fronted scripts, plays and TV shows. Encourage your son to get a sex change and push him, er, her into comedy. They’ll have some great material for it.

Argument:
I believe women are funny, it’s just that no one else does, not even other women.

Case closed:
Female comedians are worth millions and billions of dollars. Kristen Wiig and Judd Apatow’s Bridesmaids is just one example that women watch comedy and that they found Wiig and her comedy worth watching. The film grossed more than $26 million on its opening weekend alone, and 33% of the audience were made up of men.

Argument:
Women are funny, but when people say it, it hurts female comedian's feelings, so we have to make people stop saying it.

Case closed:
Remember the old childhood poem, “Sticks and stones may break my bones, but names will never hurt me”? Over time, society’s mentality has changed, and now people actually believe that names and insults can hurt us. The truth is, they only sting a little bit, for a little while, and only if you let them. We have choices. We don’t have to watch or listen to anything that upsets us, and we don’t have to respond, either.

If you’re a female comedian and you heard someone say "women aren’t funny” and now you don’t think that you’re funny, just keep working on your act, and re-watch sets where you nailed it. If you’re a woman or activist or feminist and someone said “women aren’t funny” and it pissed you off, put together a female-fronted comedy show and donate the money to charity, or go for a run. Stop at Ben and Jerry’s on the way back if you wish. But don’t you dare let it throw you. Also, spend less time on the Internet.

Argument:
Women aren’t funny, and if I say it enough times, everyone will believe it.

Case closed:
There are a lot of misogynists out there, and not all of them are male. Misogyny will always be present on our planet. We can work against it, and I applaud anyone who does, but there will always be people who “just don’t get it,” in all senses of “it." They were abused, or are mentally challenged, or are stuck in a different era, or were raised to believe that women are somehow not as “good” as men.

If someone is willing to make a blanket statement like “women aren’t funny,” they probably have some issue relating to or stemming from a woman in their past, probably mom. What they are trying to say is, “I don’t like women who are doing something that I don’t have the courage to do,” or “It makes me feel insecure to see female comedians exhibit strength,” or “I feel competition with this woman." It’s not real. It’s all stuff that is made up in the crazy annexes of the mind. So let it go. And if you just can’t let it go, then enjoy some of these great responses to the women-aren’t-funny statement:

“We don’t fucking care if you like it.” – Tina Fey

“Don’t fucking touch me." –Amy Schumer at the Jack Black roast, after Jerry Lewis extended his hand to shake hers

"Jerry Lewis once said that he didn't think women were funny, so I'd just like to say, with all respect, 'F*ck you!'" –Judd Apatow

Did you hear a great reaction to someone saying “women aren’t funny”? Please share it in the comments below.

If you like this article, please share it! Your clicks keep us alive!
Tags
jessica delfino
women
comedy
humor
gender
Gender Gap
sexism