How To Tell Your Partner To Stop Whining About Housework 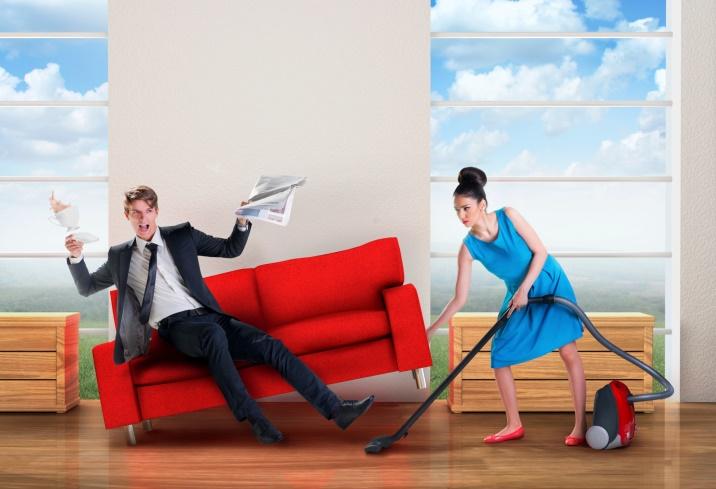 Q: My husband and I both work full-time and we have two kids (5 and 8). Our schedules are basically the same, and the kids are in school or at my mother-in-law's house while we're at work. When we're home, though, the bulk of dealing with the kids, and ALL of the cooking and cleaning falls to me. My husband says that his job is more demanding than mine is, and that I'm better at the housework than he is. We've been together for a long time, and this is really the only sticking point in our marriage. How do I make him see that this arrangement is unfair to me?

A: IT IS 2014. HOW IS THIS A THING THAT IS STILL HAPPENING HOLY CRAP THIS IS SUCH BULLSHIT I CAN'T EVEN STAND IT.

OK, so what we're dealing with here is the product of deeply ingrained social gender roles; ones that relegate women to doing all of the housework and child-rearing, even when they work just as much as their male partner. (And I apologize that I'm assuming a heterosexual relationship falling squarely in the gender binary, but I'm using the details from the letter writer as they're given, although this imbalance often can be found in partnerships of any gender or orientation.) As a society, we're still stuck pretty solidly back in "the men make the money and the women take care of the home" days in terms of our attitudes towards housework, which is pretty problematic, considering that the vast majority of household setups - even the ones with a husband, a wife, and two kids - do not work this way and haven't for a very long time.

My response to these antiquated attitudes can be summed up as such: DO YOU LIVE IN THE HOUSE? THEN CLEAN THE FUCKING HOUSE. ARE THOSE YOUR KIDS? FUCKING PARENT THEM. WANT TO EAT? COOK. FOR FUCK'S SAKE.

Seriously, why the actual hell are we all still sitting around accepting this way of thinking? Why are we OK with the assumption that women should do the cooking and cleaning just because they're women? This is bullshit. We can all see that it's bullshit, right? So why isn't it changing? Short answer: because we're not making it change. Too many people still buy into the "men are incompetent at housework, so it's just easier for the women to do it" learned helplessness crap that's been around for generations, and it needs to stop.

I can't tell you how many times I've heard, "Well, my husband/boyfriend was raised that way. His mom always did everything around the house." Well, first off, make sure you write a nice thank-you note to your in-laws for helping perpetuate this nonsense for another generation by training their special snowflake that his external genitalia somehow exempts him from washing the goddamn dishes. And, while it sucks that you have to overcome early lessons of gender role bullshit, the fact remains that if you want the status quo in your household to change, you have to change it.

In this circumstance, as in most circumstances, the most logical and useful solution is to talk about it. Explain to your husband why this situation is no longer tenable, and be ready to draft up a plan as to how to change it. Also be prepared for resistance. After all, your husband has made it this far without having to do a single thing, so he might be a little reluctant to roll up his sleeves and do his part. But make no mistake: it is his part. You're not asking any more of him than what has been asked of you for years. And do not, under any circumstances, fall for the "I don't know how to do it" or "I did it wrong" nonsense that's really just a ploy to avoid future responsibilities. If your kids don't do something right the first time, do they not ever have to do it again? No. They keep doing it until they get it right. That's what humans do. It's called learning.

Instead of letting the resentment build up until you flip your lid like a pissed-off pressure cooker, get it all out in the open now. There is no reason you should be carrying more of the housework burden just because you're the wife. As a society, we've (mostly) evolved past these bullshit gendered expectations, and the longer it exists in your household, the harder it will be to change. And consider your kids, too. Do you really want them to grow up expecting that girls do everything around the house and boys get to sit around . . . doing what, exactly? What is it that they're doing that prevents them from pitching in? Just, like, sitting around not doing anything? Yeah, fuck that. Every member of a household needs to be contributing to the ongoing running of that household, regardless of what outdated gender norm crap tells us.

If you like this article, please share it! Your clicks keep us alive!
Tags
advice
Gender Gap
housework
imbalance
domestic work
marriage
tips